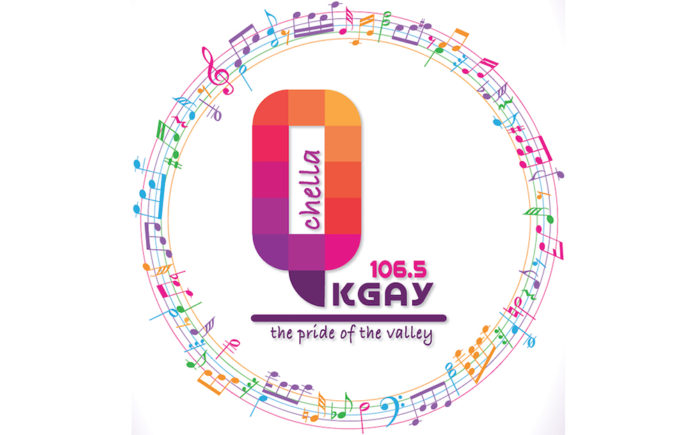 The day after Christmas brought the launch of Qchella Media Corporation and the new K-GAY 106.5, The Pride of the Valley, which debuted its new music format on Wednesday, December 26.

K-GAY, as part of Qchella Media, is a new local radio station at 106.5 FM and streamed worldwide on TuneIn Radio.   It serves the LGBTQ+ community with entertainment and information, including an on-demand podcasting platform bringing a wide variety of LGBTQ+ content to their audience in Palm Springs, the Coachella Valley and worldwide.

Besides their unique and diverse programming, what sets Qchella Media Corporation apart is that they are also a non-profit media organization, where every dollar raised through advertising and their members’ support is devoted to the content, allowing their team to meet the needs of their diverse communities in the Coachella Valley.

The change comes with operations of K-GAY 106.5 and sister Smooth Favorites “CV 104.3” KHCV-FM, coming under the umbrellas of non-profit QChella Media Corporation. Led by President Elijah Hartman, the radio operations will be overseen by longtime broadcast executive Brad Fuhr, owner of the Gay Desert Guide, which has agreed to provide Qchella with web and event services.  These services include Happy Hours, Events, Nightlife, Business listings and community news which will also appear on KGAY1065.com.

At the stroke of midnight on December 26th, their new format and positioning debuted on FM 106.5 and AM 1270 in the Palm Springs area, while also streaming on TuneIn Radio worldwide.

Businesses will be encouraged to support this not-for-profit programming with an integrated marketing plan that includes membership in the Desert Business Association (the Palm Springs area LGBT chamber of commerce), as well as “Featured Status” on Gay Desert Guide that includes social media promotions and on-air support of the radio station at varying levels.

The History of Qchella Media Corporation

In 2017, Elijah Hartman had concerns over the shortage of accurate and supportive LGBTQ+ media content across the United States, which he felt was growing daily.  Television, radio, and online media highlighted the increase in homophobia, discrimination, and hate crimes against LGBTQ+ persons. At the same time, these networks engaged in a large-scale pattern and practice of stereotyping, misrepresenting, and underrepresenting LGBTQ+ lives in order to gain ratings.  Given Elijah’s background as a media producer, his work as a business and intellectual property attorney, his non-profit experience, and his strong family connections in broadcasting, Elijah set out to change that, by creating the Qchella Media Corporation, the first-ever LGBTQ+ created, directed, and managed nonprofit media corporation.

In the following months, Elijah ventured to Palm Springs, California, to speak with community leaders and businesses, and worked to bring together a robust coalition of LGBTQ+ experts that were willing to help bring Qchella Media to life. As a LGBTQ+ destination – adored by him and many other LGBTQ+ persons and allies – Palm Springs represented the perfect place to base this new nonprofit venture and make a difference for the expansive and diverse Coachella Valley LGBTQ+ community. After many months of collaboration with community leaders and LGBTQ+ businesses, including Sunnylands Broadcasting, LLC, The Gay Desert Guide, and the Desert Business Association, Qchella Media Corporation was formed.

Their team believes that LGBTQ+ lives are strengthened and affirmed when their stories are told. As a nonprofit corporation, they work to support and foster the diverse voices of their LGBTQ+ community. They feel privileged to produce and broadcast a platform that provides a voice to all LGTBQ+ people, and to support the coalition of LGBTQ+ owned and friendly non-profits, businesses, professionals, and corporations all working promote the health, education, and the strength of their diverse and varied community.

We believe that LGBTQ+ lives are strengthened and affirmed when our stories are told, broadcast, and heard. As a new nonprofit corporation, we are working to support and foster the diverse voices of our LGBTQ+ community. As such, Qchella Media is directed and managed by LGBTQ+ members. We are privileged to produce and broadcast media to provide a voice to LGBTQ+ peoples, and to support the coalition of LGBTQ+ owned and friendly non-profits, businesses, professionals, and corporations — all working to promote the health, education, strength, and prosperity of our diverse community.

Jackie joined NIKE in 1999 where she served in a variety of roles both on the business as well as in Brand marketing. In 2010 she retired as the Global Brand Director for NIKE basketball. During her tenure she received numerous awards including an advertising Emmy and the prestigious EFFIE for marketing excellence. Upon leaving NIKE, Jackie and her spouse founded Thomboy Properties, Inc. where she works as a real-estate developer.  When not focused on work Jackie is actively involved in her local community with various charitable organizations. She currently serves as the Vice President of The Equality California Institute Board of Directors. She received her degree from The University of California, Berkeley. She was a member of the Cal Women’s Basketball Team from 1982-86 and is an avid supporter of Cal Athletics. Go Bears!!!

Brad is a media maven. He founded Palm Springs’ Gay Desert Guide and Oasis Marketing Group, connecting local businesses to the LGBTQ community, and focuses on integrated media platforms that combine traditional media, event marketing and digital platforms. Impressively, has also worked in the radio and publishing industries since the age of 15. Over the years Brad has worked for, formed, and managed many radio stations, including WLTO, Harbor Springs, WPGU-FM, at the University of Illinois, Bonneville Radio Group and Emmis Interactive in Chicago, and Sirius OutQ in Los Angeles, Clear Channel radio KTLK AM 1150, and KBIG and IHeartMedia’s PrideRadio channel. Brad has also worked with publishing companies, consulting Los Angeles Magazine, Palm Springs Life, San Diego Magazine as well as LGBT Frontiers magazine on their digital media and sales strategy.

Elijah Hartman (President / Chairman of the Board)

David is the Executive Director of the Desert Business Association, the only LGBTQ+ business networking organization in the Coachella Valley, and the second oldest LGBTQ and ally chamber in the country. A fourth generation San Franciscan, David holds a Master’s Degree in Human Resources and Organizational Development, and is a professor of Business Management and Leadership. Prior to coming to the Coachella Valley, he served as Planning Commissioner for the City of Walnut Creek, and was a manager of external program communications, and manager of business process improvement at Pacific Gas and Electric Company.

Chris has over thirty years’ experience programming radio stations, and has also been a major market morning talent and air talent on legendary stations like WLS Chicago and KZZP Phoenix. He most recently served as Program Director of #1 rated K103 & 106.7 The Eagle in Portland, Oregon.  Prior experiences included Operations Manager for iHeartRadio Raleigh, Program Director of stations in Chicago, Providence, Pittsburgh, West Palm, Louisville and others. While specializing in Top 40 and Adult Contemporary stations, Chris has programmed a wide range of formats including one of the first Dance and all Eighties formatted stations in Chicago and a Dance station in San Francisco. Chris and his partner presently reside in Palm Springs and Quito, Ecuador.

James has over 25 years of financial management and investment experience.  He has worked in executive management positions in a number of different industries, including for a chain of education bookstores, a private equity firm, a US government-funded international relations organization, and a community development corporation. James has served as a board member and leader for numerous nonprofit organizations over the past 25 years. James’ political work includes serving as treasurer for several candidates for public office, volunteering on numerous campaigns and supporting candidates and organizations who believe in full equality and justice.