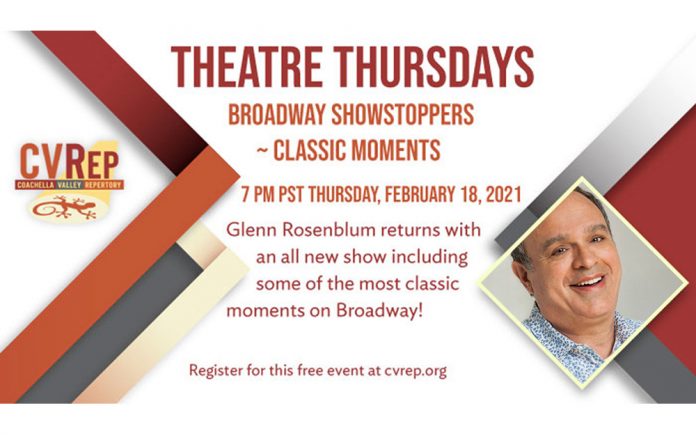 Coachella Valley Repertory’s Theatre Thursdays presents Broadway Showstoppers ~ Classic Moments at 7:00 pm PST, Thursday, February 18, 2021. Glenn Rosenblum returns to CVRep’s virtual stage with an all-new show for all the theatre lovers out there, featuring some of the most classic moments on Broadway! What better way to enjoy Broadway while staying home? Join Glenn as he dives into scenes from Carnival!, Sugar Babies, Ain’t Misbehavin, Applause, and more! Register for this free, one-hour virtual event at cvrep.org. 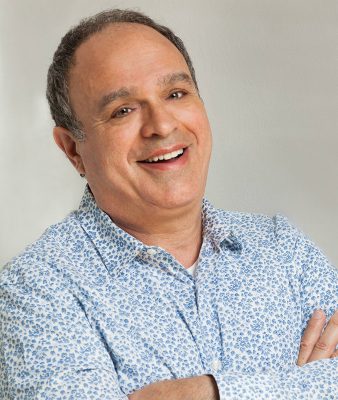 Glenn Rosenblum is a busy celebrity talent broker, lecturer, vocalist, actor and musical mensch. He holds a Bachelor Arts degree in theatre from The School of Theatre, Film and Television at UCLA, and has attended the School of Dramatic Arts at USC, and the New College at Hofstra University. BroadwayWorld.com called him the “New Prince of Los Angeles Cabaret” in his new one-man cabaret show, The Musical Man. He has been seen regionally on stage in musicals including Cabaret (Emcee), Guys and Dolls (Nathan Detroit), Man of La Mancha (Barber) and Little Shop of Horrors (Seymour). He also played himself in Annabelle Gurwitch’s hit comedy Fired!, recorded for National Public Radio at Los Angeles Theatre Works. His off-Broadway credits include Lucky Lucy and the Fortune Man starring Blythe Danner, Little Mighty with Sam Harris, and Rise of David Levinksy featuring Larry Kert. Glenn’s television work includes an Old Navy commercial with Kristin Chenoweth, as well as episodic turns on the series Bones and Miami Vice. More about Rosenblum can be found at glennrosenblum.com