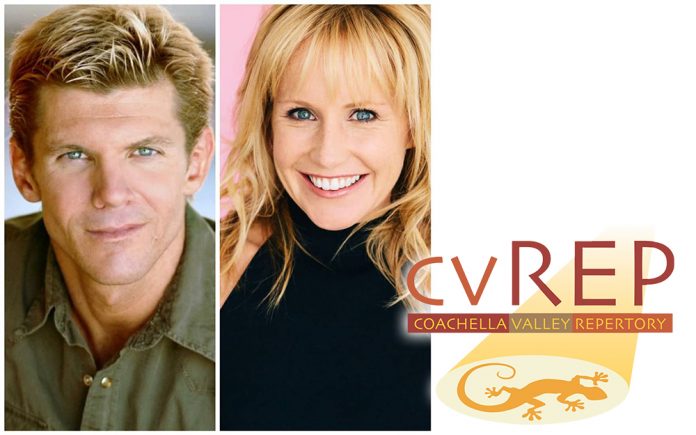 Coachella Valley Repertory’s Theatre Thursdays presents “He Loves & She Loves.” On Thursday, August 6, 2020 at 6 PM, Brent and Erika Schindele will perform their favorite love songs from the Golden Age of Broadway. From songs like “Boy Meets Girl,” to “And Then There Were Three,” this intimate evening with husband and wife will reminisce the beginning of their love story, which began when they met during a production of Stephen Sondheim’s musical play “Merrily We Roll Along.”

Erika has performed at theaters throughout California, most recently in the production of “Heisenberg” at the Jewel Theatre Company in Santa Cruz. She was in the thought-provoking production of “Collected Stories,” hosted by CVRep for which she was nominated for a Desert Theater League award for Best Actress. Her film and television appearances include “Criminal Minds,” “American Dreams,” as well as lead roles in the short films “Emerald” and “The What If.”

In the same light, Brent was a part of the national tour of “The Sound of Music,” directed by Jack O’Brien, and starred as the character Tony in the national tour “West Side Story.” Off Broadway, he starred as Johnny Blue in Pasadena Playhouse’s premiere of “South Street,” Cosme in “Souvenir” at the Falcon (Garry Marshall) Theatre, and Harold Hill in “The Music Man.” At the beginning of 2020, both Brent and Erika performed in “Emma the Musical” at the Ensemble Theatre of Santa Barbara.

Since the moment they met, the lives of Brent and Erika have been filled with music. In 2019, the spouses welcomed a baby boy who has helped them bring even more joyful music into their everyday life.

Information on upcoming presentations can be found on the website, and registration links are included.  To register for any of these events, please visit www.cvrep.org.

Erika Schindele has performed at theaters across California, most recently in a wonderfully emotional production of Heisenberg at the Jewel Theatre Company in Santa Cruz.  In the early part of 2020 Brent and Erika got to spend some time together in Emma the Musical at the Ensemble Theater of Santa Barbara.  You may remember Erika from CVREP’s thought provoking production of Collected Stories, for which she was nominated for a Desert Theater League award for Best Actress.  Some of her most memorable roles include Stella Kowalski in the iconic A Streetcar Named Desire (where she got to play opposite her husband!), Martha Jefferson in 1776 (which won an LA Weekly award), Cecily Pigeon in Neil Simon’s The Odd Couple and Belle in A Christmas Carol for 9 years running at the Tony award-winning South Coast Repertory theater. Also at South Coast Repertory, she originated the role of Helen in the world premiere musical of An Italian Straw Hat and has appeared in a number of other productions. Erika worked alongside Ms. Gretchen Cryer in her West Coast premiere and revival of I’m Still Getting My Act Together at Laguna Playhouse. Other favorite roles include: KT in Merrily We Roll Along, Mae in The Wild Party and Minnie Fay in Hello Dolly. Her film and television appearances include “Criminal Minds”, “American Dreams, and lead roles in short films Emerald and The What If… Erika is a proud and long-time member of the Actor’s Equity Association, SAG/AFTRA and AGVA.  Brent and Erika were married in 2013 and in June of 2019 welcomed their sweet baby boy Jack, who has helped them bring even more joyful music into their lives.  Please visit my website for updates and more information: erikaschindele.com and check me out on Instagram @erikacschindele

Brent recently returned from the national tour of THE SOUND OF MUSIC, directed by Jack O’Brien; locally, he played Captain Von Trapp at OCPAC and Herr Zeller at the Ahmanson. Other national tours: WEST SIDE STORY (Tony), JESUS CHRIST SUPERSTAR (Peter, Simon the Zealot, Keyboards). Off-Broadway: THE MUSICAL OF MUSICALS – THE MUSICAL! (also at Laguna Playhouse, the Colony Theatre, Philadelphia’s Prince Theater, the Cape Playhouse and Cincinnati Playhouse-in-the-Park). Here in L.A., he starred as Johnny Blue in Pasadena Playhouse’s premiere of SOUTH STREET, Cosme in SOUVENIR at the Falcon (Garry Marshall) Theatre, Anthony in END OF THE RAINBOW at Int’l. City Theatre, Richard Hannay in THE 39 STEPS at Glendale Centre Theatre, Harold Hill in THE MUSIC MAN and Bob Wallace in WHITE CHRISTMAS (twice) at the Norris in Palos Verdes. He appeared in CITY OF ANGELS, NO STRINGS and SUNDAY IN THE PARK WITH GEORGE with Reprise! played the quarterback in ZANNA, DON’T! at West Coast Ensemble and an action-movie star in Mitch Albom’s AND THE WINNER IS at Laguna Playhouse. At the Ensemble Theatre in Santa Barbara, he played the Guy in MARRY ME A LITTLE, as well the Guy/Keyboardist in STRIKING TWELVE (which he reprised at Laguna Playhouse). He played Franklin Shepard in MERRILY WE ROLL ALONG at Actors Co-op in Hollywood and also appeared in the recent production at the Wallis Annenberg in Beverly Hills. Other credits include Curly McLain in OKLAHOMA!, Sky Masterson in GUYS & DOLLS, Tommy Albright in BRIGADOON, Cliff Bradshaw in CABARET, the title roles in THE SCARLET PIMPERNEL and JOSEPH…DREAMCOAT, Romeo in ROMEO & JULIET and Stanley Kowalski in A STREETCAR NAMED DESIRE. Screen work includes COLD CASE and THIRTEEN DAYS with Kevin Costner, his hometown hero.