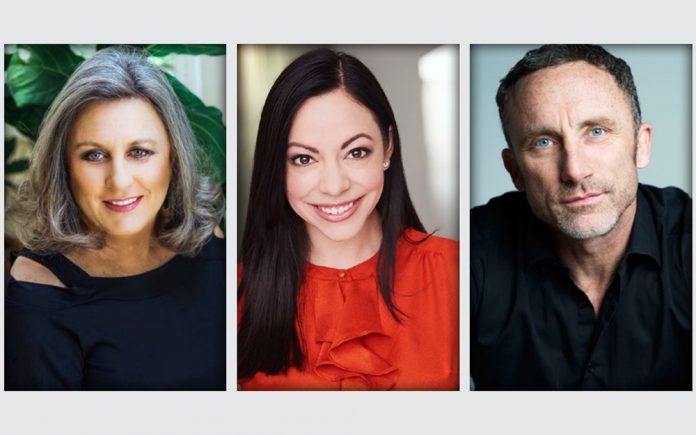 THE GOLDEN FLEECE IS A COMEDIC PARODY OF GREEK MYTHOLOGY

Renowned American playwright, A.R. Gurney is famous for his delightful, light witty drawing-room comedies. The Golden Fleece is a hysterical comedic parody of Greek Mythology. Betty, played by Angela Sauer and Bill, played by Joel Bryant is expecting their dear friends Medea and Jason for dinner. The tragedy of Medea’s awful revenge on her faithless husband, Jason does not appear to fit into the world of middle-class domesticity. Therefore, Jason’s infidelity and Medea’s rage are bound to upset their dinner plans. But by updating the Classic Greek drama and placing Medea and Jason’s marital problems in the hands of a very ordinary American couple, Gurney has created a very funny, yet poignant comment on marriage.

Two actors have been selected to perform this comedic parody on the Greek Myth story of The Golden Fleece. Angela Sauer (Jane the Virgin, Get Shorty, Masters of Sex) has appeared in a wide variety of roles from Shakespeare to TV’s Masters of Sex. Regional theater appearances from New York and Chicago to Los Angeles, includes Boeing Boeing and the pre-Broadway run of Bonnie and Clyde. She has an MFA from the FSU/Asolo Conservatory and is the reigning champion of LA’s Manhattan Monologue Slam.

Joel Bryant (Moonlight & Magnolias, The Heartbreak Kid, Criminal Minds) is a Desert Theatre League nominee for his performance in Frankie & Johnny in the Clair de Lune in 2014. As a standup comedian or with comedy partner and wife, Deven Green, he’s performed all over North America, for the military in the Middle East and numerous fund-raisers, comedy festivals, and corporate events. He’s a sought-after Host & MC for TV, corporate events, and charities (APLA Health, Team 2 End AIDS, Disabled Vets).

Returning to CVRep’s virtual stage is director, Joanne Gordon, who has previously been a part of CVRep’s Theatre Thursdays by directing The Clean House, a virtual staged reading presented by Whittier Trust. She was also the moderator for CVRep’s Luminary Cocktail Hour with Alexandra Billings, actress, singer, author, teacher, and activist. Gordon is an award-winning director whose accolades include five Drama-League Awards, a LA Critics Choice Award, and more.