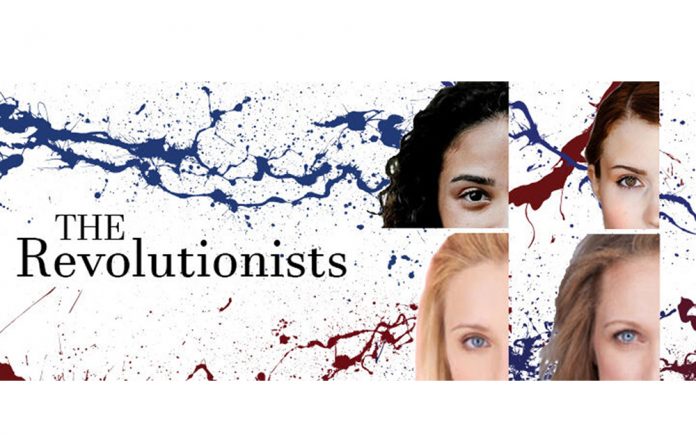 Greetings from the French Revolution … where heads will roll! Coachella Valley Repertory’s Theatre Thursdays continues their online staged readings with The Revolutionists on Thursday, February 25, 2021 at 7:00 pm (Pacific). An extraordinary, all-female cast has been assembled to bring to life this comedic quartet by Lauren Gunderson. The show will run two hours with a five-minute intermission. To join this presentation, visit cvrep.org and register.

The Revolutionists is about four very real women who lived boldly in France during the French Revolution’s Reign of Terror. This girl-powered comedy is comprised of Playwright Olympe de Gouges, assassin Charlotte Corday, former queen (and fan of ribbons) Marie Antoinette, and Haitian rebel Marianne Angelle, who murder French Political Theorist, Jean-Paul Marat, and try to beat the extremist insanity in 1793 Paris. This grand and dream-tweaked comedy is a true story about violence and legacy art and activism, feminism and terrorism, compatriots and chosen sisters, and how we actually go about changing the world.

Returning to CVRep’s virtual stage to direct this performance is Charles Pasternak (Hamlet, Man of Destiny). In December, Pasternak directed CVRep’s staged reading of William Shakespeare’s, Much Ado About Nothing. Pasternak has comprised an all-female cast with the hope the audience will have a thrilling experience watching this staged reading come to life. “I hope they’ll take away the joy and thrill of spending two hours with these incredible women, says Pasternak. “It’s a wonderfully funny, poignant, and prescient play – our audience will walk having loved the ride, and with plenty to think about afterward.”

Three members of this cast recently appeared in Pasternak’s Much Ado About Nothing and will be returning to CVRep’s virtual stage for The Revolutionists: Charlotte Munson (Emperor of the Moon, As You Like It) as Olympe de Gouges, Laetitia Hollard (A Christmas Carol, Shrek the Musical) as Marianne Angelle, and Brittany Pirozzoli (Hamlet, Candide, Madwoman of Chaillot) as Charlotte Corday. Joining these returning actors will be Abbey Siegworth (Electra, Abigail) as Her Majesty, Queen Marie Antoinette.