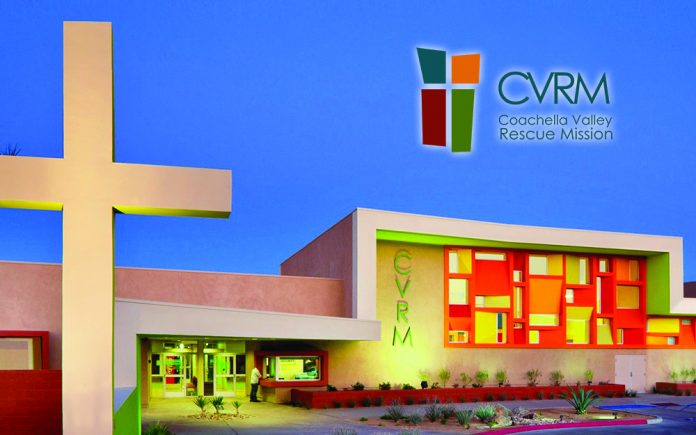 Operating since 1971, the Coachella Valley Rescue Mission has provided a safe place for those in need of refuge. The dedicated staff and volunteers have served more than 360,000 meals annually and provided shelter to thousands of men and women with children. Food, clothing, and showers have even been provided for those who choose not to stay at the shelter.

In terms of food services, the Coachella Valley Rescue Mission serves three meals on a daily basis to residents of the shelter on a daily basis, making an average of over a thousand meals a day. Those interested in volunteering in the kitchen can contact the Volunteer Coordinator, Shannon Curtis at 760-347-3512, ext. 246.

The Coachella Valley Rescue Mission even offers catering services to the desert. Prepared by professional chefs and with a staff consisting of clients and graduates of the mission, the Mission Catering can prepare anything from a gourmet menu or a barbecue dinner at an affordable price. Some delicious specialties include an extensive pasta selection, a taco bar, assorted Italian party trays, and excellent seafood. All proceeds go towards Coachella Valley Rescue Mission Programs and catering inquiries can be directed to the Food Services Manager, Erin Jones, at 760-347-3512 ext.229 or missioncatering@cvrm.org.

Another way that the Coachella Valley Rescue Mission assists those in need is by collecting donations from the public. The New Life Resale Boutique located in Coachella accepts donations of gently used clothing, kitchen, household, sports, tools, or business items that can be an enormous help to the homeless community. Other items that the Mission accepts are recreational vehicles, toys, collectibles, and furniture.

“It is a total blessing to serve the Coachella Valley community. We are making a difference in our outreach and make it a priority to assist those in need,” stated Development Director Scott Wolf.

The Coachella Valley Rescue Mission also holds several events throughout the year to raise awareness in the community and to collect materials of use to the homeless population. This includes the 11th annual Backpack Drive to provide backpacks to the thousands of children in the Coachella Valley that will face the coming school year without the supplies needed to succeed in learning, the Annual Toy Giveaway to distribute about 15,000 toys to needy children, and the recent 49th Anniversary Gala that took place on February 27 to celebrate the Mission’s years of service.

According to Wolf, the coming Easter season will be primarily focused on collecting donations from the community, particularly hams and canned food items.

“We want to especially emphasize the need for volunteers during this Easter season, as we serve more nonperishable food items to those who are food insecure. We are especially in need of ham, potatoes, and canned vegetables,” said Wolf.

The Coachella Valley Rescue Mission has made a continuous effort in assisting the desert community for decades with a goal to even further expand its reach—the most recent instance being the partnership with the City of Palm Springs to provide a 40-bed micro-shelter since July of last year.

“Nationwide, this country has a problem with helping the homeless community. Without the Coachella Valley Rescue Mission, there would be less resources for the population we are trying to serve. We are grateful for the community’s help,” said Wolf.

For those who wish to contribute to the cause, there is a “donate” button on the Coachella Valley Rescue mission website home page that will direct visitors on how to make a helpful contribution, allowing customization of amount and payment type, at cvrm.org.