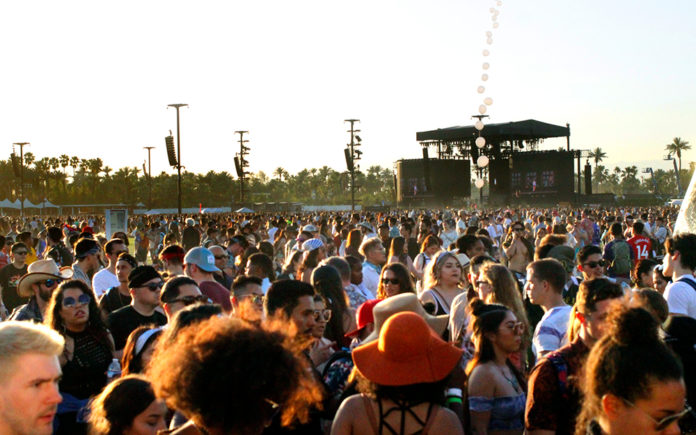 Coachella weekend 1 is over and it gave us a sense of what this semi controversial lineup was capable of. I was surely a skeptic. This year’s lineup was sort of lackluster in my opinion. Well, Goldenvoice surprised me. They delivered an amazing weekend of entertainment. There were some disappointments; however most of what I caught was pretty good.

I had a late start to the shows on Friday. Realistically, I only wanted to see St. Vincent, who delivered one of the best performances of the whole weekend, and it was only the first night. It was a very surreal, intense show and they were on top of their game. Annie Clark is equal parts talented musician and performance artist. She and her band blazed through hits spanning her whole career. The only disappointment to me was the lack of a David Byrne cameo since my favorite album of hers is the collaboration with him entitled “Love This Giant.” Friday ended for me with SZA’s hot set featuring guests like Kendrick Lamar. The Weekend was a bit of a disappointment. SZA would have been a better headliner.

I wasn’t sure if I’d see much on Saturday. I made it a point to watch a tiny bit of Chromeo, and I was not into it at all. Way too much Autotune, and when there were no effects, he sounded bad. After Chromeo, I met up with a friend who just came to see David Byrne with me. I was anxious for this set. I knew it’d be the closest I’d come to seeing Talking Heads, and maybe he’d bring out St. Vincent. Bryan and I grabbed a quick beer and walked right to the front just in time for David Byrne’s to take the stage; another surreal set not to be missed. He blasted through songs off his new album, American Utopia, and Talking Head hits like “Burning Down The House,” and “Once In A Lifetime.” His backing band was essentially a marching band and 2 guitarists. This performance literally brought tears to my eyes even though St. Vincent didn’t guest (he did talk about how “Annie must’ve been here”). It was magical to see such an innovator and to watch him with one of my best friends.

Right after David Byrne finished, we hauled ass to catch a bit of The Bronx. Exhaustion was hitting me hard. That all went away as soon as we entered The Sonora tent. There were maybe 100 people watching and 50 of them were moshing around the lead singer. Without hesitation, it was into the pit. I haven’t moshed in a decade, but I felt I had no choice. Bryan was eager to throw me back into the pit anytime I tried to rest. This was the most high energy show of the weekend.

I opted out of the beginning of Beyoncé to check out X Japan. Everyone tells me I should like them, but they’re just not my thing. I gave them a shot hoping that seeing them live would change my mind. It didn’t. They’re incredibly talented, just not for me. I went back to see Beyoncé and arrived just in time to see Destiny’s Child. It was pretty impressive, but here’s where the unpopular opinion comes in… I was not impressed after Destiny’s Child. The production was amazing. Her dancing was on point, but her voice seemed a bit off. Plus, her sister’s guest spot was just dancing. Solange should’ve sung.

Sunday was brutal. I’d already worked 32 hours in 2 days with only 4 hours sleep. I had to pull through. The crowd obviously felt the same way. It didn’t get busy until mid-afternoon. The first band I saw was Portugal, The Man. I was blown away. I’ve always liked them and questioned them playing the main stage at Coachella. They owned it. 5 years ago I saw them in an intimate setting and this year, it was roughly 50,000 people. Cardi B was next. She was good, but not as good as her albums. She gets a pass for being 7 months pregnant. The joke was her unborn child was going to be her surprise guest with how much she was shaking her booty, but it was actually Warren G. The next band I saw was A Perfect Circle. Maynard usually is on fire. He sounded a bit off on this night. In the dozen or more times I’ve seen him in one band or another, this was the only time he wasn’t perfect. It’s definitely a must try again next weekend. 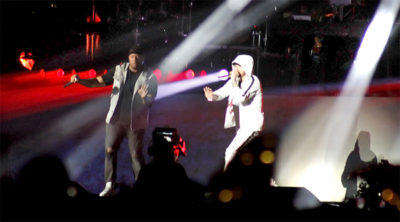 Eminem ended the night on the Coachella stage. A lot of rap doesn’t transfer well to live shows, and I felt Eminem was an example of this. The production was there, but the flow was a bit off. There were definitely some shining moments throughout the set, but it was a bit of a disappointment. Dr. Dre and 50 Cent were the guests for this set, and they delivered. However, judging by the crowd, it wasn’t enough. There was a mass exodus long before Eminem’s set ended.