If you look up the term “Raconteur” in the dictionary, you will probably see a photo of Colin Hay. The man is a born yarn-spinner and storyteller. Best of all, he sets his stories to music. He is probably best known as the front-man for Men At Work, one of the most successful bands of the early ‘80s. These days, he’s content being a solo troubadour.

Colin Hay was born in Scotland in 1953 and moved to Australia with his family at age 14. He quickly gravitated toward music and by 1978 he had struck up a musical partnership with Ron Strykert.  The duo began performing as Men At Work. Initially, their sound was acoustic, until they added drummer Jerry Speiser, bassist John Rees and multi-instrumentalist Greg Hamm on keys, saxophone and flute.

They took up residency at the Cricketeers Arms, honing their chops as they entertained notoriously rough and tumble crowds. Their sound was a sharp blend of poppy New Wave and gritty Pub Rock with just a hint of Reggae. Their popularity soared and they attracted the attention of American producer Peter McIan. He got the band signed to the Australian division of Columbia Records and Men At Work headed into the studio.

Their debut, “Business As Usual,” was released in Australia in late 1981, and the rest of the world in Spring, 1982. MTV was in its infancy and hungry for new music. The music channel quickly embraced the band’s quirky videos and clever songs. “Who Can It Be Now” and “Down Under” went into heavy rotation and the album shot up the charts spending an astonishing 15 weeks at #1.

Men At Work’s music appealed to nearly everyone. In 1982 they opened for the Clash and Fleetwood Mac. They quickly recorded Cargo, their second album, but Columbia delayed the release, intent on wringing additional sales from their debut. When Cargo dropped in the summer of 1983 it shot to #3 in America and #1 in Australia. The five-piece were now headlining world tours.

After an extended break in 1984, recording sessions for their third album were fraught with in-fighting. Speiser and Rees quit the band and Hay, Hamm and Strykert soldiered on as a trio, bolstered by studio musicians. When Two Hearts arrived in 1985, it received lukewarm reviews and lackluster sales. The band called it quits the following year.

Although Men At Work had amassed 15 million fans world-wide, when Colin Hay re-emerged as a solo artist in 1987, he basically started from scratch. He put down roots in California, making sunny Los Angeles a home base. He began touring tiny clubs, armed with only his acoustic guitar. Slowly but surely, he began cultivating a following. His solo debut, Waiting For Jack was released through Columbia in 1987. Three years later he recorded Wayfaring Sons for MCA. That was the last time he made an album for a major label.

Throughout the ‘90s he recorded four albums, Peaks & Valleys, Topanga, Transcendental Highway and Going Somewhere. All were released on his own Lazy Eye imprint, distributed by the Nashville label, Compass Records. It was his live shows that really increased his popularity, his in-between song patter included stories that were equal parts humorous and poignant.

By the turn of the 20th century, actor Zach Braff had become an ardent fan. Soon after, he was starring in the TV series “Scrubs,” and he began inviting Colin to act and perform on the show. When he made his directorial debut with the popular (albeit tedious) film, “Garden State,” he personally curated the soundtrack. It contained a heady mix of 21st century up-and-comers like Coldplay, the Shins, Zero 7 and Frou Frou, as well as some deep tracks from Nick Drake and Simon & Garfunkel. But it was Colin’s song, “I Just Don’t Think I’ll Ever Get Over You,” that was the stand out.

Drafting off his renewed acclaim, Colin continued his regular cycle of writing, recording and touring. Every couple of years a new album would appear: Are You Looking At Me in 2007, American Sunshine in 2009, Gathering Mercury in 2011 and Next Year People in 2015.

Recently, Colin has been performing regularly on both Jimmy Kimmel and Jimmy Fallon’s late night shows. He is also the subject of a documentary; “Colin Hay: Waiting For My Real Life.” But the extracurricular activity hasn’t slowed his music output. Fierce Mercy is his 13th solo album, recorded in his Topanga Canyon home studio as well as Compass Sound Studio in Nashville. 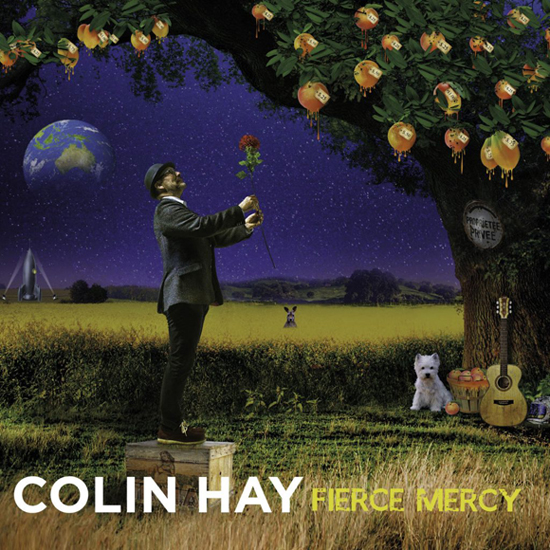 The album gets off to a rousing start with “Come Tumblin’ Down.” Twangy guitar connects with wheezy accordion, spiraling banjo and a kick drum beat. The breezy melody belies lyrics that recall better days of a small town weathering a recession; “We took a ride on the ferris wheel, built from glass and steel and such/Now it’s melting in the sun, and it’s not worth that much.”

Although his solo work has mostly remained bare bones and acoustic, there is a sweeping grandeur to a couple of songs here. The instrumentation and arrangement on “Secret Love” tilt toward Phil Spector’s Wall Of Sound. Rolling timpani rhythms underscore tinkling glockenspiel, swelling strings and tinkly piano. Even Colin’s vocals feel more stentorian on this sturdy declaration of love.

His mien is more playful on “I’m Walking Here,” his gruff repetition of the title echoes the crusty indignation of Ratso Rizzo, from the film “Midnight Cowboy.” Over wah-wah guitar, pillowy French horn, fluttery strings and a sinewy conga beat, Colin trades verses with backing vocalist Joe Lopez. Joe’s rapid MC flow initially feels incongruous next to Colin’s measured tone. But Joe’s words have a street verisimilitude that Colin can’t pull off; “Yeah some say we glorify, nah we tell the facts, walk a peaceful path but still get harassed/Stray rounds make kids want to duck down, and run when the muffler backfires like a gun sound.”

Mortality is a theme that threads through several tracks on the album. The twinkling “A Thousand Different Reasons” blends lush strings and baroque orchestration with rippling percussion, sun-kissed guitar and sprightly piano figures. A stately ballad, the lyrics pay homage to his long-standing marriage to Cecilia Noel; “And in this world truth be told, we’re the lucky ones/And if we find someone to love until we fade away into the rise and fall, of each and every night and day, together we’ll breathe into the wind.”

“Two Friends” is a graceful tribute to fallen friends. Filigreed acoustic fretwork lattices over gauzy piano notes, both are buttressed by a steadfast martial cadence. Bereft but resolute, Colin soldiers on; “What I feel is emptiness, it’ll fade over time I guess/Sometimes there’s a price to pay for love, and we’ll just carry on.”

“The Last To Know” introduces the concept of “fierce mercy.” Over a rock steady rhythm, percolating guitars and a sunshiny mix of piano and Hammond B3, Colin acknowledges that at some point, we all must put our lives in the hands of a higher power. “Don’t blink an eye or look the other way, mercy comes to visit you should let her stay/It may happen on any given day, don’t be the last to know.”

Finally, “The Best In Me” is anchored by stuttery Spanish guitar, swirly Hammond B3 and a loping rhythm. The lyrics note that sometimes we are only at our best when we connect with a soul mate; “Shadows in the night, danger is all I know, so difficult to let go/If I close my eyes and breathe, gets easier to believe, and you bring out the best in me.”

On two tracks, “Frozen Fields” and “I’m Going To Get You Stoned,” Colin easily slips into character. The lyrics of the former offer a sort of homecoming for a veteran who has outlived his family and is haunted by memories of a painful childhood. The bittersweet melody is tethered to a galloping gait, underscored by warm piano fills, swoony strings and languid guitar chords.

The latter mines the same territory as Steely Dan’s “Hey Nineteen.” Over a hazy, meandering melody, an aging lothario puts the moves on a nubile millennial. As he riffs on a series of Baby Boomer touchstones, the girl remains nonplussed until he cuts to the chase and offers to get her stoned “like it’s 1967.” Nothing like a little herbal refreshment to bridge a generational divide.

The album closes with its most heartfelt track, “She Was A Friend Of Mine.” Delicate acoustic guitar wraps around woozy trombone accents and a supple string section as Colin sketches out a loving elegy to his late mother. It’s quiescent and affectionate in equal measure.

There is a deluxe version of this record that adds more songs: the Bluegrass-meets-New Wave crunch of “I’m Inside Out,” the Country comfort two-step of “Blue Bay Moon” and the tough love punch of “Love Don’t Mean Enough.” Here Colin adheres to a hard-won philosophy; “When life has no certainty, I stick to the melody.” All three are excellent additions, and well worth a little extra dough.

Most bands and musicians from the early ‘80s have either become a trivial footnote, or are reliving the glory days as part of a reunion tour. Colin Hay has managed to segue effortlessly into a second act. Fierce Mercy is a welcome addition to his impressive body of work.