So often in the telling of history, one very important group tends to get relegated to the footnotes… women.  It’s important to know that women did more than sew flags and give birth to the great men who shaped our world.  Women have always been artists, writers, politicians, aviators, soldiers, scientists and mathematicians.  Written music and novels, marched in the streets, and have sometimes had to adopt male psydenumes and don trousers.  They have fought grave discrimination and oppression in order to seek rights and freedoms that brought them closer to equality.  They have been jailed and imprisoned, beaten and scorned and yet they persevere.  They have shaped history in ways that only women can and yet, they have most often been omitted in the telling of our tales.

We have all been asked that question… If you could spend time with anyone from the past, who would it be?  What great minds or historical influences would you want to converse with and question?  How did they see themselves?  Did they know that they were influencing the outcome and direction of America?

And so in keeping with the celebration of Women’s History Month and our curiosity to pick the minds of some of the greatest influential women, Writer/Director and women’s advocate, Dee Jae Cox, has created “CONVERSATIONS WITH… An Improvisational Gathering of Historic Women.”  This is a theatrical piece that allows audiences to experience meeting great women in history.

“Conversations with….” is an improvisational gathering of historic women who respond to contemporary matters regarding women’s lives and cultural perspectives.   Each show and presentation is unique and unscripted, as history’s greatest heroines come together to discuss their role in shaping America and how it has impacted modern times.

This panel of distinguished women will respond to questions from a moderator and the audience.   Experience first-hand what it would be like to have a conversation with a panel of history’s most accomplished women.

“Conversations With…. An improvisational gathering of historic women,” will be performed on Saturday, March 26th, 6-8pm, at The Tolerance Educational Center, 35147 Landy Ln, Rancho Mirage, CA 92270.

For Ticket and show Information – www.californiawoman411.com 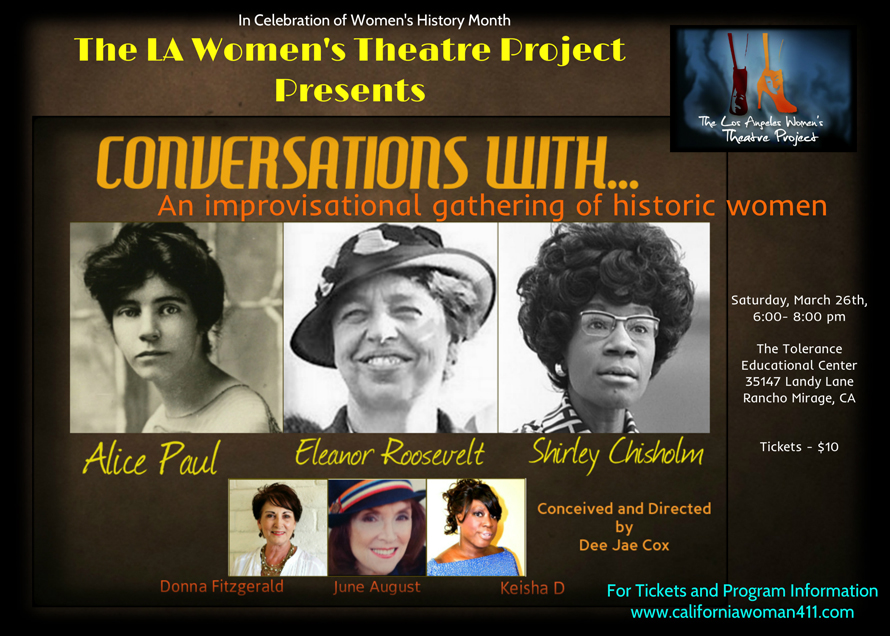