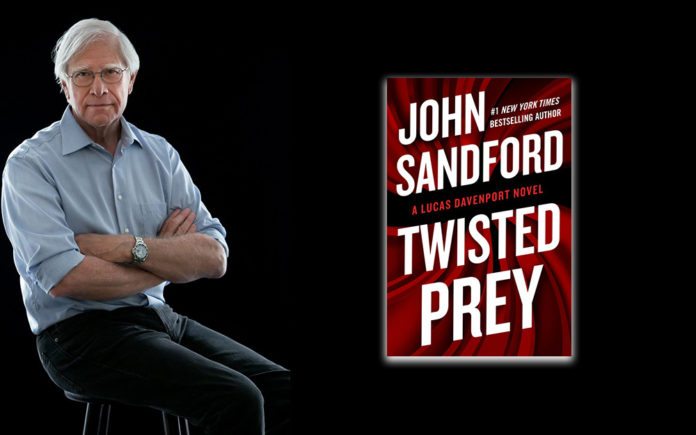 There is something very nice about living on the opposite coast of the nation’s capital.  Having distance from the insanity of the political environment makes coping with the chaos more manageable.  In John Sandford’s Twisted Prey (Putnam, 387 pages), politicians are not just corrupt, they are deadly.

This is the 28th installment in the “Prey” series with detective Lucas Davenport.  Davenport is now a Federal Marshall which allows him to work anywhere in the country.

When an assassination attempt on United States Senator Porter Smalls goes wrong, but kills his female companion in an auto accident, Davenport is called to take a closer look after the police discount Smalls’ version of events.  The married Senator only survived the forced crash because of his girlfriend’s ability to drive the SUV through trees instead of going over the cliff and plummeting into a gorge.

Davenport is asked to help, not because the Senator was assumed drunk and with someone other than his wife after a romantic weekend at his cabin in the woods, but because he believes a colleague is behind the attack.

His colleague is the ambitious Junior Senator Taryn Grant, a beautiful and wealthy one-percenter who desperately wants the Presidency.  In her short tenure, she managed to get a seat on the Senate Intelligence Committee.  Coming from the same state as Smalls, she and the Senior Senator have a bad history.

Davenport also has a past with Senator Grant and knows she is a full-blown psychopath and ruthless killer.  He wants to get her but can’t get the evidence necessary to convict her.  Maybe this time he can take her down.

As Davenport unravels the car crash and proves it indeed was a murder and assassination attempt, a more sinister group of people emerge.

“Hercules” is a private military group and is affiliated with global arms dealers.  The organization is made up of ex-Delta Force, Navy Seals and military specialists that may work for the CIA as well.  The founders of the company also sold off a business worth millions called Inter-Core that had a military contract to provide specialized armor.

Davenport soon connects Senator Grant to Hercules.  Her seat on the Intelligence Committee has given her access to trained killers but there is still no proof that she indeed hired any of them.  As Davenport gets closer to finding out who was behind the accident, people start to die.  As much as Davenport wants to get Grant, she may be too smart.

But, Davenport has his ways to get Grant even if it’s not through the justice system.

Each book can mostly stand on its own; however, it is more appealing if you know the returning character, his friends and what he’s been through.  Davenport is a complex guy and a great detective.

I liked the Washington D.C. and Virginia area settings.  The “Hercules” organization and operators were a scary bunch and the inside dealings with politicians and global leaders were frightening.

Taryn Grant is a delicious villain!  She is tough and deadly.  I really wanted much more of her.  I liked her power and fearlessness, which made her a real opponent and challenge for Davenport.

Why Senator Grant wanted Senator Smalls dead was vague and the reason she tried to kill him was weak for such a smart woman who wanted to be President.  Certainly there are more ways to bring down your enemies other than murder.  I was hoping to see Grant one day become President.

Twisted Prey gets right down to the business of action and suspense.  And since Davenport is a sharp and resourceful detective, there is hardly a wait to get to the bad guys and find out what they’re up to and why.   Davenport is clever and if he cannot do something himself, he can “twist” others to get it done without them even knowing!

I would like to believe that criminals, thieves and sociopaths don’t populate the nation’s capital, but I fear the old adage may be accurate: the truth is stranger than fiction.