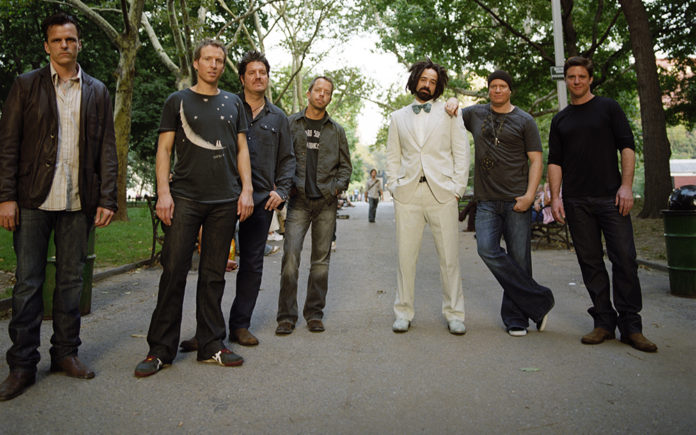 After more than two decades and 20 million albums sold globally, Counting Crows are celebrating 25 years of making music by hitting the road for a worldwide “25 YEARS AND COUNTING” tour, which will bring them to the Special Events Center at Fantasy Springs Resort Casino on Friday, July 13, 2018.

“The nice thing about having 25 years of music to celebrate and seven studio albums we absolutely love to choose from is that we can play a different show every night,” said Crows vocalist Adam Duritz. In addition to celebrating 25 years of music in 2018, Duritz has also launched a new podcast, “Underwater Sunshine!” – a series of conversations between noted non-journalist Duritz and his pal, author and music journalist James Campion, about life, music, and whatever comes into their large brains. The weekly podcast, published every Monday, currently holds a five-star rating and is available on iTunes.

Counting Crows, fronted by lead singer Adam Duritz, has sold more than 20 million albums worldwide after exploding onto the music scene with their multiplatinum breakout album August and Everything After featuring the worldwide smash “Mr. Jones” in 1993. Hits like “Round Here,” “A Long December,” “Hanginaround,” and their cover of Joni Mitchell’s “Big Yellow Taxi” soon followed and their success multiplied.

The band released their seventh studio album Somewhere Under Wonderland in September of 2014, which earned critical acclaim as one of the “band’s best,” scored a top 10 debut and was recognized as one of the group’s “stronger works (USA Today).” It also claimed a spot on Rolling Stone’s “Top 50 Songs of 2014” list with the track “Dislocation.”

ROGER DALTREY ANNOUNCES A NEW ALBUM AND A NEW TOUR, INCLUDING AT STOP AT FANTASY SPRINGS RESORT CASINO IN AUGUST

Roger Daltrey, Rock and Roll Hall of Fame member and founder of the iconic rock band The Who, has announced a new solo album entitled As Long As I Have You and, with it, a series of summer solo shows that will bring him to The Special Events Center at Fantasy Springs Resort Casino on Saturday, August 18, 2018. Daltrey will be joined on stage by current Who band members Simon Townshend, Jon Button, Scott Devours, Loren Gold and Frank Simes, and they are expected to perform Who hits, rarities and songs from Daltrey’s new album.

Roger Daltrey has sold over 100 million records including 9 US & 10 UK top ten albums and 14 UK top ten singles. He’s played over well over 2000 gigs in a career spanning over 50 years including venues such as Woodstock, Monterey Pop, Desert Trip, Shea Stadium, The Super Bowl half time show and Live Aid to name but a very few.

Daltrey has also cultivated a singing career outside of The Who, beginning in 1973 when he found himself on the BBC’s “Top Of The Pops,” promoting the single “Giving It All Away” which reached No. 5 in the UK charts. It was a track from his first solo album Daltrey, released that same year, which he followed up with the albums Ride A Rock Horse (1975), One Of The Boys (1977), the soundtrack to McVicar (1980) and After The Fire (1985).

As Long As I Have You is Daltrey’s first solo album in twenty-six years and will be available on June 1, 2018. The album was produced by Dave Eringa, best known for his work with the Manic Street Preachers and on Roger and Wilko Johnson’s album Going Back Home. It features Pete Townshend’s inimitable guitar on seven tracks as well as guest performances from Mick Talbot (Dexy’s Midnight Runners, The Style Council) on keyboards and Sean Genockey (Suede, The Proclaimers) on lead guitar.

Roger Daltrey has raised tens of millions of dollars for charity all over the world and was awarded a Commander of the British Empire for his work with The Teenage Cancer Trust. He is in the UK Music Hall Of Fame and has lifetime achievement awards from The BRIT Awards and from The Grammys.