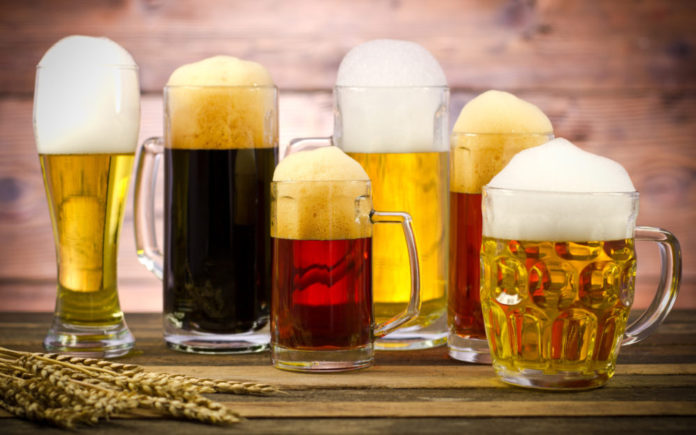 Gose: an oddly named beer that’s German in origin. I used to pronounce it “goes” until I started hanging out with people who are way snootier and more pretentious than I am, and they taught me that it’s pronounced “go-zuh”.

A gose is a sour wheat ale that’s got both coriander and salt in the recipe, creating a very bright, tangy, and refreshing beer. Like all good sours, it’s hardly bitter at all, cuz let’s face it, sour and bitter together is just a bad taste in your mouth.

I’ve been telling people for years that if they like the flavors of a Michelada, then they’d love the tangy, lightly salted, and delicately spiced flavors of a Gose.

Hefeweizen: Old world style, wheat beer. Unlike American-style wheats, which are known for a clean and neutral yeast character, German Hefeweizen has pronounced clove (phenols) and banana (esters) flavors that come from the type of yeast used. Similar yeast characteristics are found in Belgian-style witbier, but they’re more subdued in German hefeweizen. Not nearly as popular now than it was in its 80’s and 90’s heyday, Samuel Adams, Gordon Biersch, and Pyramid all make good hefs that can be easily attained.

IPA: Highly ubiquitous and insanely popular, IPA’s are arguably the posterchild of the craft beer movement. Everybody knows what they are; highly (sometimes insanely) hopped pale ales that satisfy a craving for the flavor of hops. IPA’s are going to get their own article; there’s that much to write about them.

Lager:  The most popular type of beer on the planet. Every popular and widely distributed beer you can think of is a lager. Budweiser, Corona, Fosters, Heineken, Miller, Pacifico, Red Stripe, and Tecate are all lagers. Lagers take longer to ferment and condition than ale’s do, but that extra time yields a much cleaner product than your standard ale. Light and crisp with a subtle flavor, lager beer can run from the malty to the hoppy to bitter, although the hoppier versions rightly only exist because of craft brewers.

Lagers are the ultimate warm weather beer, best when consumed at the beach or after mowing the lawn.

Pale Ale: Golden to straw colored, and with more yeast character than a pale lager, pale ales have been around since the mid 1600’s. All beer in England was brown before that point; the wood fired kilns that dried the barley malt for brewing tended to darken and smoke the barley, in turn darkening the beer to a nut-brown color.

Once maltsters realized that by burning coke (not that kind of coke Scarface, the kind that’s created from coal and that burns at lower temps than wood. It also didn’t create as much smoke. Go to rehab already) instead of wood they could retain a light color to their malt, breweries started making beer with this newer, lighter flavored malt, and the pale ale was born.

Each country has its own style of pale ale that reflects its cultures, tastes and trends. The English have an ordinary bitter, best bitter, and extra special bitter as their standard pale ales. As far as the American-style goes, this style of beer is pretty much a lower alcohol, less intensely hoppy version of an IPA. Much more substantial than a session IPA, balance is key with American pale ales, making it a perfectly utilitarian beer that can be drank anytime something more substantial than a lager is required.

Sierra Nevada Pale Ale set the benchmark for the American pale, and everything from Ballast Point’s Grunion to Lagunita’s Born Yesterday owe their existence to its legacy.

Porter: So, by 1703, pale ale was hot, and brown ale was not. Nobody, and I mean nobody, gave a shit about brown ale anymore. By the beginning of the 18th century, English brewers were starting to highly hop their pale ales, and they reworked their dusty old brown ale recipes to keep up with the newer emerging trends. The brown ale became stronger, darker, higher hopped, and longer aged. Dark beer was reborn, and beer drinking crowd of the 1800’s embraced it.

Named porter for the working-class gents who imbibed it, this is a beer with restrained roasty character and bitterness. There’s a chocolate-caramel-malty profile to a porter that is delicious when paired with roasted foods. Porters remain a popular style to this day, and are directly responsible for the birth of the stout.

Stout: It didn’t take long after creating the first popular porter that brewers thought, “but what if we went bigger? What if we made them even stronger, hoppier, more bitter, and more flavorful?” They set out to make a more assertive dark beer, and “the stout porter” was born.

Stouts are known for a roasted, coffee-like flavor, and in the case of Russian Imperial Stouts (So named because only the Tsar of mother Russia was deemed worthy to imbibe such a decadently rich stout), a complex assortment of chocolate, burnt coffee, licorice, and dried-fruit flavors that create a complex, bittersweet beer.

Milk stouts are another popular variation. Brewed with lactose, this creates a beer that has sweet, creamed coffee flavors, and is excellent when served on nitro.