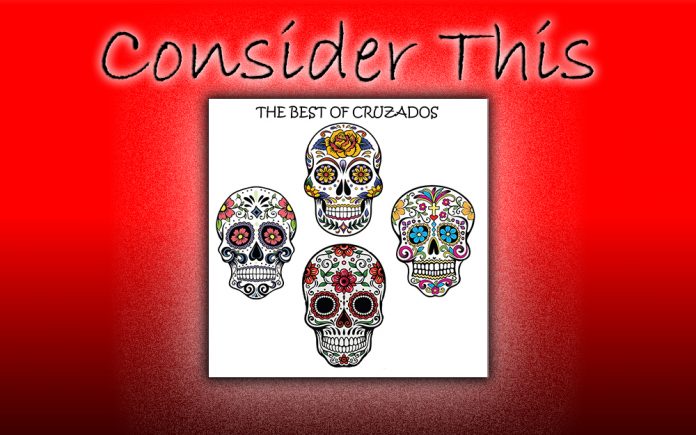 It’s been more than 40 years since Punk Rock spit, snarled, scratched and elbowed its way into the cultural zeitgeist. The accepted misconception is the genre was invented in London, England in the mid ‘70s. In reality, it is truly an American idiom. Bands like the MC5 along with Iggy And The Stooges kicked it into gear back in the ‘60s. Their scuzzy sounds proved an antidote to the Hippy-dippy Summer Of Love.

A few years later four guys from Queens picked up the gauntlet. Donning ripped jeans and leather jackets, they adopted the pseudonym Paul McCartney employed when he toured with the Beatles. The Ramones’ music matched sharp sketches of urban decay with incredibly catchy two-minute melodies that owed as much to Iggy as it did to Phil Spector. Following their 1976 debut, their gig at the Roundhouse in London was rather famously attended by members of the Clash and the Sex Pistols. Emboldened by Johnny, Joey, Dee Dee and Tommy’s primitive cool, these nascent bands to adopt the same uncluttered approach. By the end of that year, the British Punk scene had exploded.

Although L.A. sold itself as a bastion of sun, surf and mellow vibes, beneath the smoggy-sunshine was a sprawling metropolis, a melting pot of colors and ethnicities. These disenfranchised, dissatisfied denizens simply were not living the California dream. Bands like the Germs, the Weirdos, X, Fear and the Plugz tapped into that dichotomy.

The Plugz, also known as Los Plugz, were the first Latino Punk band in Los Angeles. They came together in 1978 and played seminal Punk clubs like the Masque, Madame Wong’s and the Music Machine. It was at that last venue that none other than Bob Dylan caught their set and became an instant fan. He invited the band to jam with them at his Malibu estate for days on end. When Bob made his 1984 debut on “Late Night With David Letterman,” it was the Plugz that backed him on a blistering three-song set.

By the mid ‘80s, the Sunset Strip had been taken hostage by Hair Metal bands like Motley Crue, Ratt and Poison. Punk Rock had ceased to be a driving force in the Los Angeles music scene. Bands like the Blasters and X had transcended the narrow confines of Punk, adding elements of Country, Folk and Blues. Los Lobos took it a step further and honored their Mexican heritage. The confluence of styles appealed to Tito, Chalo, Tony and Steven. Out of the ashes of the Plugz rose Cruzados. They immediately began honing a rootsier sound around town and on the road. Initially, they signed with EMI and recorded an album, but the label shuffled personnel and dropped the band.

Cruzados briefly relocated to New York, an A&R rep from Arista caught their set at the infamous Punk club CBGB’s. Back in L.A. they played a showcase at Club Lingerie in Hollywood. Arista founder Clive Davis was in attendance, and the band signed with them. Although most of the label’s big acts were MOR artists like Barry Manilow and Air Supply, they managed some street cred by signing Patti Smith and Lou Reed.

Cruzados self-titled debut was released in early 1985, it received  respectable reviews and modest sales. It also garnered a legion of well-connected fans. Musicians like David Byrne, John Fogerty and Brian Setzer sang their praises. On tour they served as an opening act for Joe Cocker, Billy Idol and INXS, just to name a few.

By the time they released sophomore effort, 1987’s After Dark, there had been a crucial change in the line-up. Steven Hufsteter left the band (for love), and guitarist Marshall Rohner joined the fold. The record smoothed their rough edges a bit, but still offered Cruzados’ familiar mix of rootsy guitars, sun-soaked melodies and heart-felt vocals. Stevie Nicks became so enamored with the track “Bed Of Lies” that she offered the band a coveted spot opening for Fleetwood Mac on their epic Tango In The Night tour.

The music press constantly touted Cruzados as “the Next Big Thing,” when that prediction failed to come true, the band amicably parted ways in 1990. Tito quickly formed bands like Tito & The Tarantulas and Psychotic Aztecs, which featured Steven Hufsteter for a time. He really made his mark composing music for hit movies like “Desperado,” “From Dusk To Dawn,” “Mi Vida Loca” and “Million Dollar Hotel.”

Steven Hufsteter has dipped his toe in and out of the music business since then, forming his own band Shrine and most recently playing with the Division Men. Chalo went on to form The Havalinas before becoming part of Bob Dylan’s touring band and finally, the drummer for Social Distortion. Sadly, he died from a heart attack in December, 2018. Marshall went on to play with T.S.O.L. as well as Jimmy & The Mustangs. Unfortunately, his intravenous drug use led to arrests, stints in jail and ultimately AIDS. He died from AIDS-related causes in 2005.

Tony has had the most prolific career, working as a session bassist for everyone from Pee-Wee Herman, Willie Nelson and Neil Young. He’s toured with Matthew Sweet, Roger Daltrey and Marianne Faithfull. He’s also managed to carve out a desultory acting career and can be found in indie masterpieces like “Georgia” and “She’s So Lovely” as well as mainstream fare such as “L.A. Story,” and “Roadhouse.” He’s authored several books and recently taken musical detours as a solo artist and as half of Americana duo, Cisco & Dewey. His longest lasting gig is as leader for the Jazz/Lounge combo, The Martini Kings. Not only have they recorded over 20 albums, their music has been featured in TV shows and television commercials, while constant touring has had them perform for Presidents, captains of industry and even a Kardashian or two.

Both of Cruzados original LPs have been long out of print. Luckily, the band has just released a collection entitled Best Of, featuring classic tracks from both records, as well as songs found only on assorted soundtracks. The album gets off to a rollicking start with an alternate take of “Rising Sun.”

A more polished version of this song can be found on their self-titled debut, but this rendition was recorded for the aborted EMI album. Serrated guitar riffs ride roughshod over jaggy bass lines, Latin-flavored percussion and a locomotive rhythm. The lyrics take a page from the Mac Davis “Baby, Baby Don’t Get Hooked On Me” break-up playbook; “Party Girl, I see the lights of dawn, well, after all, I think we’ve had our fun, I see a rising sun.” What makes this song a true unicorn is that it features searing harmonica runs from Bob Dylan. On the break, stinging, Blues-infused guitar licks collide with his wild thin mercury. The arrangement truly splits the difference between an angular Punk attack and muscular meat and potatoes Rock.

Although Cruzados only recorded two albums, a lot of their best work cropped up on soundtracks. Both “The House That Love Built” and “Strange Face Of Love” originally appeared in the Robert Rodriguez Mariachi/Hitman saga, “Desperado.” The former blends braided guitars, percolating percussion, shadowy keys and sinewy bass. Slipping somewhere between Spaghetti Western flavors and hints of Gypsy Jazz, the lyrics limn the regret and recrimination of a wrecked romance; “Forget about the past, forget about the guilt, I’m going back to the house that love built.”

The latter opens with a short soliloquy from Antonio Banderas before descending bass lines lock into a Blues/Psych shuffle. Scattershot guitars snake through hairpin turns connecting with sinister keys and a crackling beat. Tito’s authoritative growl tells us how it’s all goin’ down; “The rain’s soul makes killer cry, he wants desperately to die, but skillfully forgets/He’s back on the streets with no regrets, take it like a man…the strange face of love.”

The prickly “After Dark” appeared on the “From Dusk To Dawn” soundtrack in more laid-back form. By rights, it should have been the title track from their second album. This version feels more menacing. Tangled guitar riffs unfurl over vroom-y bass lines and a bongo-riffic beat. Tito’s upper lip curls with an Elvis Presley-fied sneer as he tries to gain the upper hand with an irresistible femme fatale.

Four more tracks pop up from their 1985 debut. The haunting “Hanging Out In California” is powered by reverb-drenched guitars, rumbling bass, Spector-esque castanets and a propulsive beat. The lyrics explore the dark allure of the Golden State, bitterly asserting “There’s a street that runs between those that got it made and those who have to wait.”

“Flor De Mal,” which is sung entirely in Spanish, is a baroque bolero that employs flowery lyrics, willowy guitars, subdued bass lines and a stutter-step beat. Here, Tito seems to be channeling Ranchera kings like Pedro Infante and Jorge Negrete. His richly emotional performance is matched by the cinematic sweep of the arrangement and instrumentation.

“Wasted Years” simply crackles with authority, but the album’s centerpiece is “Motorcycle Girl.” Guitars cascade over spooky keys, loose-limbed bass and Charlie’s piledriving tribal tattoo. The song is rife with lyrical non-sequiturs like “You waltz through the marsh with the fruit of your choice, can’t get enough love, they had it, you got it rough/Don’t look at me like a backwood fiend, I’m not a customer, start walkin’ start talkin’ girl.” (Huh?) But that doesn’t diminish it’s gritty appeal. Landing somewhere between Western Swing and Roadhouse Blues, the song is, to paraphrase Robert Palmer, wildly irresistible.

Then there’s the bittersweet “Small Town Love.” Slashing guitars, stealthy keys and boomerang bass are bookended by by a pounding martial cadence. Tito and Tony’s warm harmonies intertwine recalling a lost love, insisting “It’s not the same old story, we weren’t bound for glory, just a small town love, our lives were made for something else.”

The album closes with a raucous live take of “Don’t Throw Stones” If Stevie Ray Vaughan and the Guess Who ever collaborated it might sound something like this song, which shares some musical DNA with “Shakin’ All Over.” Cruzados played themselves in “Road House,” Patrick Swayze’s saga of a sensitive Zen philosopher-slash-club bouncer.

Whatever forces conspired to keep Cruzados from actually becoming the next big thing must remain a mystery. But that’s okay, aside from the untimely passing of Marshall and Chalo, Tito, Tony and Steve have all found their niche and continue to make great music. “Best Of Cruzados” is a potent reminder that 35 years on, this band still sounds great.