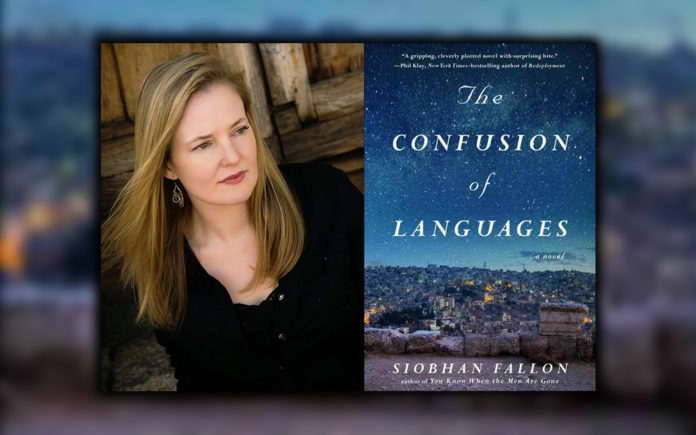 —–
The Confusion of Languages
by Siobhan Fallon
Fiction
—–

There is so much discord in the Middle East at this very moment it seems impossible to resolve. The Muslim population is at war not only with the world but itself — Sunni vs. Shia.

Islam is a challenge for Westerners to understand. Its very name means “Submission” which is in total contrast of our quest for liberty and pursuit of happiness. In Siobhan Fallon’s debut novel, The Confusion of Languages (G.P. Putnam, 326 pages) two American women find the Arab culture a difficult lifestyle to manage.

The story is told by Cassie Hugo, whose husband is a career military man stationed at the American Embassy in Amman, Jordon. The couple has lived in Jordan for nearly two years. They have been unable to conceive a child, and the stress of trying to get pregnant, and being in a foreign country, has taken a toll on their relationship.

When a beautiful American couple arrives in Jordon with their baby and becomes part of the embassy family, Cassie finds herself host and mentor to Margaret, the young wife and mother.

The women have little in common, but form a bond as outsiders. Cassie believes she has not made friends at the embassy because she is not old, nor young, and she has no children. Maybe it’s because she’s really a controlling, angry bitch.

Margaret is different from the other embassy women. She is uncomfortable around other mothers and women, much like Cassie. Margaret is blond with blue eyes and she refuses to cover her hair or any of her skin, which is an affront to some – most – Muslim men.

Women who are immodest are seen as “asking” for trouble.

But Margaret wants to win hearts and minds by being herself. She believes if she is kind, generous and friendly to both Arab men and women, she will be a good example of what Americans are really like. Margaret’s baby boy, Mather, is like an ambassador. Both Arab men and women want to squeeze his chubby little legs.

Against Cassie’s advice and warnings, Margaret continues to do all the things the embassy recommends not doing. She goes out shopping uncovered with the baby, she learns to drive, she gives away money, feeds stray cats alone at night and she makes friends with the men around her apartment building.

When Margaret and Cassie’s husbands are deployed to Italy for special NATO training, Cassie is flattered that Margaret’s handsome husband has reached out to her to keep watch over Margaret.

But soon Cassie becomes jealous, possessive and unable to control Margaret. They argue and Cassie leaves Margaret to her dangerous ways.

With Cassie off her back, Margaret decides to travel with her baby to see Jordon’s ancient ruins and historical sites. For the first time in her life, Margaret feels free to explore the world un-judged.

However, in due course, Margaret indeed finds herself in serious trouble and worse, the cause of trouble for others. Cassie offers to help, call in the US Marines, get their husbands involved, but Margaret insists on handling the situation herself, but the cultural differences are too vast.

With Cassie watching the baby, Margaret goes off to make things right, but she is never seen again.

The Confusion of Languages is a well-told story and is reminiscent of the hugely successful novel Gone Girl by Gillian Flynn. Author Fallon, uses the trope of a found diary to tell Margaret’s side of the story after it’s discovered and read by Cassie.

When Cassie first shares her interpretation – and judgment — of Margaret as a wife, mother and friend, Cassie portrays her as a woman who is aloof, simplistic and ignorant. But when we enter Margaret’s head and hear her story in her own words from her diary, we find her to be just the opposite. Margaret is intelligent, brave, honest and very sympathetic.

The story is told over several hours on May 13, 2011. It takes place during the Arab uprising. The military husbands mention a new Benghazi embassy and the rapidly changing politics in the region.

Fallon includes the cultural differences in a living, breathing way. She quotes a Muslim author who writes that men are weaken by women and therefore can never be civilized. Whaaat?

One of the reasons I was drawn to this book is because I, myself, am challenged by, and curious about Islam’s culture and treatment of women. I read all that I can for a better understanding, but still have difficulty accepting the notions of “total submission” and “modesty” practices.

Is it too much to expect men to be strong and have self-control under all circumstances involving women?

When women are treated as equals, only then we will have a just and noble society for all.

The author, with personal knowledge and writing prowess, lures the reader into this fascinating kingdom of religious repression. Fallon’s narrative provides a clear window into a cultural that is the antithesis of everyday American life.