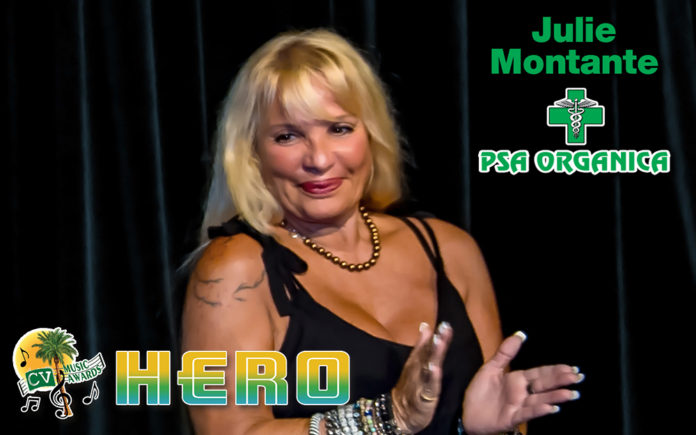 P.S.A Organica, a popular medicinal marijuana dispensary in Palm Springs, calls itself ‘A Collective That Cares,’ and the truth in this statement is apparent. The lobby of the shop is welcoming, with seating and water for anyone who needs a break from the heat, and the products sold there are helping many valley residents, according to owner Julie Montante

“The cannabis business, we do a lot of research and development for diseases such as AIDS, cancer, Parkinson’s,” Montante explains. “We carry in our store usually 60-65 strains of indicas, sativas and hybrids… for any need that anyone has, we have… the perfect meds.” The products they carry usually carry between 20 and 38% THC “I usually don’t want too low on the THC, otherwise it’s not effective to the body,” she says. The shop carries a wide assortment of products including all kinds of edibles and concentrates “We even have ice cream,” Montante explains. “Basically, people that have radiation, once they get burned the ice cream goes down, coats their throat, soothes their stomach, and then they’re able to want to eat versus in the old days when people received [chemotherapy] they would always eat a big dinner… and then throw it up.” According to Montante, many edibles can be used to increase appetite in patients receiving chemotherapy.

Born and raised in Santa Monica, Montante attended Notre Dame and Venice High. She lived in the Los Angeles area for 32 years before moving here and staying for another 32 years. “L.A. was getting a bit congested and over powering… I was a landscaper at the time and basically there was not enough work over there and the desert was getting built up. It was easier to do work here.” Montante wasn’t able to attend college, as she lost her father when she was 18 and she began working to support herself. She began her career in landscaping and has even won awards in landscape design. Her mother got cancer at 45 and that drew her to the medical cannabis industry, to treat illnesses like cancer. The transition was natural for her. “Green plants and green plants,” she says. “I always had a fascination with plants… my girlfriend was a grower and she needed a place to sell her product. I opened a dispensary in Thousand Palms about 8 years ago.” In addition to her awards for landscaping design, she has received honors such as being placed on covers of magazines and billboards, being named one of the Top 12 Most Influential Women in the desert by CV Weekly in 2016 and she now sits on the Village Fest board for Palm Springs.

Montante attributes her success to her giving nature saying “learning to give, helping those that are sick and … believing that God helped [me] help them” are all important factors. She sees her product help her customers all the time saying, “We get a lot of patients off of opiates, get them off of hardcore drugs and medical marijuana sooths their needs… their addiction. Cannabis treats anywhere from Parkinson’s to HIV to cancer… any kind of nerve deficits in the body. It’s an all-around natural drug and it helps anyone that knows how to use it properly.”

Montante says that her favorite part of the job is when she is thanked by her customers. “People shake my hand and tell me thank you for helping them, that they’re in remission. We get tons of letters… seeing and helping people get better is my fuller life,” she says. Montante sympathizes a lot with her customers because her mother was in the same position before marijuana was used medically. Her ability to help her customers is something that she appreciates not only professionally, but personally as well, and finds her ability to contribute to the community deeply satisfying.

In addition to helping people with her business, Montante works with the homeless in Palm Springs through Well of the Desert, which offers food, clothing and toiletries to people in need. P.S.A. Organica offers patients $5 off their purchase if they donate 5 cans of food. She also works with Desert Aids Project as well and says she wants to help anyone who needs it. She values all of the local charities and tries to give to as many as possible. Montante thinks her charitable tendencies are “somewhat genetic,” saying, “My family has always been givers and I think that was just kind of handed down. My religion and my faith in God tell us to help those that are in need and I have always been successful doing what I do because of that.” Montante’s brother Lenny works alongside of her at the dispensary as Manager and Buyer. Montante hopes to open another dispensary in Palm Desert when the city starts awarding licenses. The dispensary only offers medical marijuana for now, but will begin offering it for recreational use in 2018.

Something that people might be surprised about as they get to know Montante is that her appearance can be misleading. “I don’t always look like what is underneath,” she says. “I’m funny, I laugh a lot, I’m goofy, I enjoy life. I guess… looking at me they think I’m something else than what I really am.” Montante has a wide range of interests, including sports and all kinds of music, and spends her vacations in Hawaii admiring the natural beauty. When she lived in L.A. she worked in set design for many films, including Beetlejuice, which she cites as her favorite movie. She is also an animal lover. If she wasn’t working with medical marijuana, her dream would be to own a zoo. She fulfilled her passion for working with and helping animals by adopting pets that had been injured or abused, some of which needed surgery or physical therapy. “I adopt ones that people have thrown away,” she says.

Montante’s advice to beginning entrepreneurs is to “be passionate about what you like and love what you do, be happy that you’re doing it. Make sure you understand marketing. Make sure you learn your skills well.” Her personal mantra, that hangs on the wall of her shop is, “life is not measured by the number of breaths you take, but by the moments that take your breath away.”