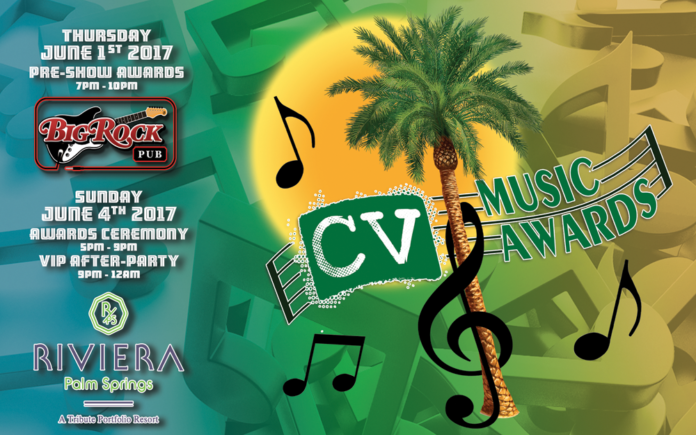 The CV Music Awards have grown and now we must spread the event between two nights and two venues. We started with just a few categories five years ago and kept growing: in 2015 we had 28 categories and last year 32. This year we have 37 categories in all genres that the valley got to vote on.

Combine that with the usual 15+ bands that we have perform and that means we had to do something different this year. So like the Grammy’s, Oscars and Golden Globes, who all have separate ceremonies to give out awards in all the categories (hundreds) that you don’t see televised, we will be doing just that by having an additional separate event this year.

Our gracious sponsor, Big Rock Pub, will be hosting the Pre-Party Awards Ceremony on Thursday, June 1 from 7-10pm, where we will announce winners in 13 of the 37 nominated categories. There will also be several performances by nominees. The price for BOTH awards shows will be $25.00 in advance and $35.00 at the door. YES!!! That means $25.00 gets you into BOTH awards ceremonies at Big Rock and The Riviera! The show at Big Rock will have limited seating so I highly recommend you purchasing tickets in advance as you might be turned away at the door due to capacity.

There will also be a Special Performance from Female Vocal Nominees including: Courtney Chambers, Linda Lemke-Heinz, Symara Stone, Lisa Lynn Morgan, Chelsea Sugarbritches, Kelly Derrickson, KT Zapcart, Bri Cherry, and Esther Sanchez, Ali Saenz, Jen Corradi and Sepultura Moon from The After Lashes. These ladies will open the show at 5:00PM sharp so make sure to get there early as you don’t want to miss this amazing performance.

Starting at 4:15 in the lobby of The Riviera grand ballroom, Herbert (Herb Lienau who is receiving the Trailblazer Award), will be performing with his keyboard as attendees are entering the event. Also on hand from 4:45 up until the show starts at 5:00pm Katie Zapcart (percussion), Bri Cherry (violin) and Johnny Robbins (ukulele) will be doing a short instrumental jam, so make plans to arrive early to catch these rare performances as well.

We are also planning a very special VIP After Party for the Main Awards at the Riviera, which will feature a 40 minute collaboration of several of the rap/hip-hop nominees performing including J Patron with Ocho Ojos, Lootenant, Million and Albertini, Thr3Strykes and The Dirty X’s, followed by a set from Long Duk Dong and then closing out the night will be a set by Blackwater.

For those who have attended this in the past you know it’s an event not to be missed. So get your tickets now as the VIP party will also have limited tickets this year. VIP tickets are $50.00 in advance and $65.00 at the door.

Not only did we increase the number of categories this year but we also increased the amount of nominees in many of the categories, giving more bands and artists a chance for exposure, to perform and ultimately win an award.

2017 CVMAs Band and Awards Line up at The Riviera

4:45 Bri Cherry, Katie Zapcart and John Robbins will be on stage performing a 15 minute instrumental set.

5:10- Welcome to the 2017 CVMAs. Introduction of Bradley Ryan & Bianca Rae cohosts for the first half of the show.

5:35 Announce the winners from the PreParty awards show from Big Rock event.

5:45 Present the “Visionary Award” to AMP

6:55 Tracy Dietlin and Phil Lacombe introduce Morgan James and Todd “TK” Killiam as cohosts for second half of the show

8:00 The Trailblazer Awards presented to Scott Reeder and Herb Lienau