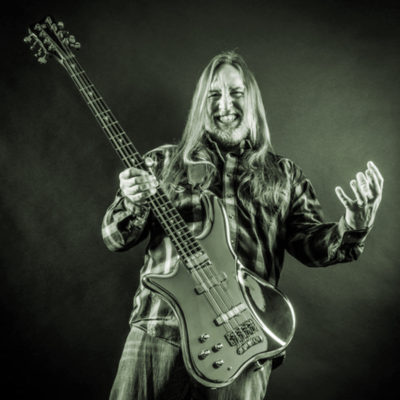 Scott Thomas Reeder will be receiving the 2017 Trailblazer Award at this year’s Coachella Valley Music Awards. Reeder is the ultimate bass player who happens to hail from the desert. He plays his guitar left-handed using a left-handed bass with the strings inverted. Reeder was a member of Kyuss from 1992-1995. He was also a member of the groups Subservice, Dead Issue, Target 13, Across The River, The Obsessed, Nebula and Unida. In addition, he’s a world-renowned producer working with the likes of Dali’s Llama and Orange Goblin at his studio, The Sanctuary, located on his property. He currently plays in rock-bottom missionaries Fireball Ministry and blended bashers Sun & Sail Club. Coachella Valley Weekly is honored to award Reeder, who is busier than ever. “I’m up to my ears with stuff right now with deadlines looming over the next few days on the Fireball Ministry recording, album artwork, amongst all kinds of other stuff,” shared Reeder.

We reached out to some of his friends to share their thoughts on him receiving this award.

Mario Lalli (Fatso Jetson, Across the River, Yawning Man): “Scott’s one of those rare natural born talents that shows itself very early in complex insights into composition and melody, harmony, rhythm, dynamics at 14/15 years old. When we started playing together, Scott was on drums back then. While we were playing simple punk rock ideas he was always really breaking it down and developing ideas making it progress. As a bass player, later on, and as a composer, he really was a true individual with a focused talent and vision. The heavy grooving improvs and jamming in Across the River and later KYUSS, was fundamentally Scott. He brought that and brought it with amazing swing and heft; a grooving wall of thunder.”

The Reverend James A. Rota II (Fireball Ministry): “In a time when playing musical instruments has become passé, Scott remains a trailblazer not only for his playing, but also for his love of music. That is apparent in his entire catalog and I have witnessed it first-hand, most recently completing an album that included collaborating with him as a songwriter. Scott is one of the last true masters of his instrument and to quote Alice Cooper, “We’ve still got a long way to go!”

Bob Balch (Fu Manchu, Sun & Sail Club): “I was always a fan of his playing. I even tried to sneak into Irvine Meadows when KYUSS opened for DANZIG and WHITE ZOMBIE. My friends and I were caught during Reeder’s set so I never got to see them play. Fast forward, like 20 years, and I got to jam and record with him in SUN AND SAIL CLUB. He pounds the shit out of his bass when the time is right. Or he is super melodic and finds pockets I didn’t even think about. Not to mention it’s all upside down which gives him a sound that sticks out on every record he plays on. Tone for days as well! The only thing that parallels his massive bass tone is his heart. Reeder is the real deal. Dude rules and I’m stoked to be a part of his musical journey.”

The Hellions: “Scott Reeder is deserving of this award not only for his musical prowess, his pivotal role in the desert scene and knack for bass playing mastery but also for the imprint that he has left on the global music scene as a producer, engineer and how he captures the fireworks of the bands that he and his wife, Renee, graciously host in his Banning studio, The Sanctuary. When the Hellions recorded there in 2015, we were treated with mutual respect and hospitality, making it a truly awesome and creative experience. Also, Scott’s input into our recording was a refreshing and collaborative bonus for us, as we are not only fellow musicians and Coachella Vall-ians but also longtime fans of his contribution to the massive and diverse musical footprint within this desert. In short, Scott Reeder kicks some major rock n’ roll ass and we are stoked for his acceptance of this well-deserved Trailblazer award!” 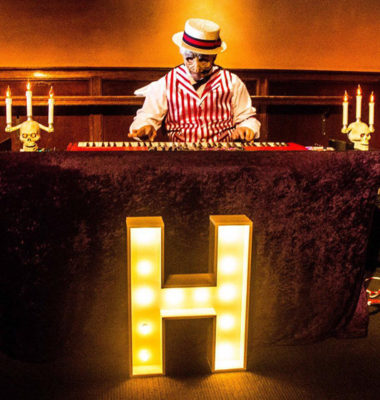 Herb Lienau is one of the desert music originators. As Herbert he continues to push the boundaries of music and performance art. Lienau has his own take on what it means to be a Trailblazer. “It means I’m old and had fun creating music and did not manage to kill myself along the way, despite myself.” Lienau has played with many of the early desert rock innovators and he’s been in bands like Dead Issue, Half Astro and Del Padres. We are privileged to celebrate what Lienau has provided us and look forward to what he has in store next. Congratulations on receiving the 2017 Trailblazer Award Herb!

The Hellions: “Herb Lienau has helped The Hellions grow and become who we are today, as musicians and live performers. We grew up listening to Decon and many of us cite that band as an influence. Then we cut our teeth performing on the same bill in many local venues with his other band, Half Astro. He has always been a face that the local music scene is familiar with and a voice that has been congratulatory and at the same time critical of us as a band. That is rare; someone in the music scene or a peer who takes the time to inform us of both our glories and our missteps. And now, Herb is gracing us with his alter-ego, Herbert, an avant-garde performance artist with a knack for tickling the ivories with disturbing yet entertaining earworms that harken back to the days of vaudevillian and schlocky horror tunes. Herb deserves this Trailblazer award as a dynamic entity that understands and also embodies the postmodern condition of entertainment and performance. On behalf of the Hellions, we say, “Congratulations, Herb, and thanks for all that you have done for us!”

Sean Wheeler (Throw Rag): “Herb has a pop sensibility he brought to songs early on and a ‘devil may care’ attitude that is and was important when punking out. He loved and gave himself 100% to the alchemy of the spells he cast through vibrations and sound and was willing to mess the recipes of that which had come before in the darkest realms of light.”

Zach Huskey (Dali’s Llama): “Herb Lienau is a great guitarist, singer, keyboardist, but MOST impressively, he is a songwriter. When we were teenagers in the eighties, Herb wrote, played in, and fronted punk rock bands. I did the same thing in garage rock bands, but Herb was the only songwriter in the desert that I felt I had to keep up with. I felt that he was my competition and that because of him I had to be a better songwriter. Herb is above all else a creative being. You may be the best musician around, but you cannot do what Herb does, and that is write, create, and perform ‘Herb music’. Now that is an artist, and that is what real artists do right? I am proud of him and I am privileged that he is my friend. Because of Herb, we all know that “Right’s Right!” and also to be a little leery around creepy, old men who play the piano in pizza joints.”