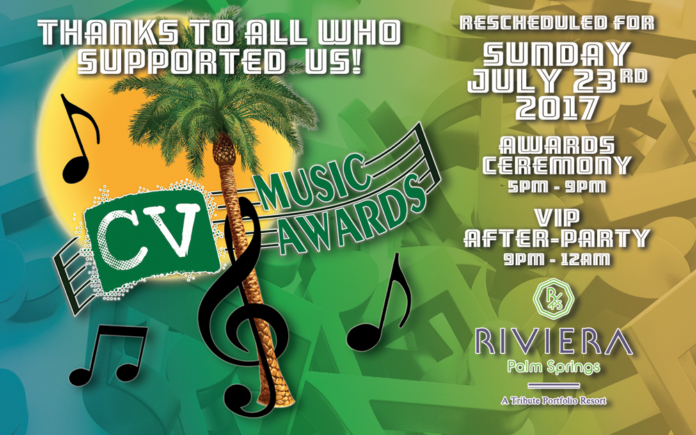 The CV Music Awards has been rescheduled from the June 4 date when the power went out at The Riviera to this Sunday, July 23.

This year we have 37 categories in all genres that the valley got to vote on. A total of 43,130 votes were cast.

Not only did we increase the number of categories this year but we also increased the amount of nominees in many of the categories, giving more bands and artists a chance for exposure, to perform and ultimately win an award.

The remaining 21 categories will be given out at the main awards show at The Riviera this Sunday, July 23 along with our special awards: 2 Trailblazer Award recipients (John Stanley King and Ronnie King), 2 Pioneer Award recipients (Scott Reeder and Herb Lienau), a Lifetime Achievement Award recipient (Alvin Taylor) and a new Visionary Award recipient (the AMP Program). See flyer on page 4 for bands performing and program below for band and awards time slots.

We are also planning a very special VIP after party, which will feature a 40 minute collaboration of several of the rap/hip-hop nominees performing including Million and Albertini, Thr3Strykes with Steven Hall (Drum Hall/Se7en4), followed with a set by DJ Guy Worden and finishing off the night will be Blackwater.

For those who have attended this in the past you know it’s an event not to be missed. So get your tickets now as the VIP party will also have limited tickets this year. VIP tickets are $50.00 in advance and $65.00 at the door. For tickets call 760-501-6228.

A huge THANK YOU to our HERO Sponsors: Ken Hanna owner of Big Rock Pub, Vincent Battaglia owner Renova Solar, Julie Montante owner PSA Organica and TK from 93.7 KCLB, and each and every person who contributed to the Generosity Campaign to make these awards happen. There is still time to donate.

2017 CVMAs Band and Awards Line up

5:25 – Announce Awards that were already given out on June 2 at Big Rock and June 4 at Riviera: