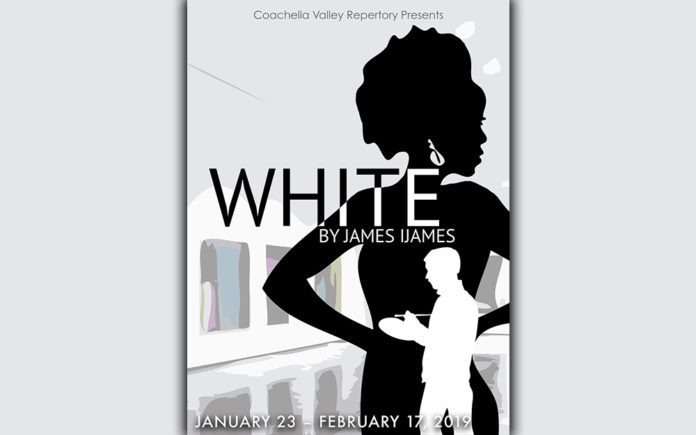 The Coachella Valley Repertory (CVRep), now celebrating its ten-year anniversary, has announced they will offer White by James ljames as the second production of their 2018/19 season.

Set to open at the Atrium in Rancho Mirage on January 23 and run through February 17, 2019, White is a funny, 90-minute play that draws on both life and art to examine issues of racism, sexism, gender and identity – a perfect fit for CVRep’s 2018/19 seasonal theme of “a handful of isms.”

In White, gay white male artist, Gus, cranks out canvas after canvas of crèam-colored paintings. He lectures at a college, receives fellowships, and lives with his boyfriend, Tanner, who is of Asian descent. Although Gus has achieved comfortable success he is, by no means, famous.

When Gus learns that his best friend Jane has become senior curator at the illustrious Parnell Museum, he implores her to put him in their “New America” exhibition. Unfortunately, Jane tells him that the “New America” only wants female ethnic voices, and that there’s no room for white guys.  So, Gus hires Vanessa, a local African American actress, to invent a fictional artist named Balkonaé Townsend, a brash and political artist to claim his art, while also fitting the museum’s desire for “new voices”. Gus and Vanessa construct a quick, humorous backstory for her and everything is going smoothly until Balkonaé takes over and Gus has to deal with the mess he’s made.

Asked about his selection of this project for CVRep’s 2018-2019 Season of “isms,” Artistic Director Ron Celona, who will direct, says, “This play really has it all, and with the current heightened atmosphere in our country, couldn’t be more timely and relevant;  it deals with issues of race, ethnicity, gender, sexual preference and affirmative action, and does so with ironic humor.  We’re very much looking forward to presenting it to our audiences.  It will give the Coachella Valley the opportunity to see and hear a young, upcoming playwright’s* perspective.”

WHITE had its 2017 world premiere at Philadelphia’s Theatre Horizon where it enjoyed critical acclaim.

“WHITE bursts with humor…the best of which come at the expense of the institutionalization of art…The ending adds a surreal twist, driving home Ijames’ exploration of black women’s exploitation by feminism, by contemporary culture, and by white women.” – Philadelphia Inquirer

THE COACHELLA VALLEY REPERTORY THEATRE is a non-profit, professional regional theatre which has Small Professional Theatre (SPT) status with Actor’s Equity. The Coachella Valley Repertory Theatre is an educational and dramatic theater organization that presents innovative productions and children’s outreach programs designed to enrich the quality of life for Coachella Valley residents and visitors. For more information, call 760-296-2966 or visit www.cvrep.org 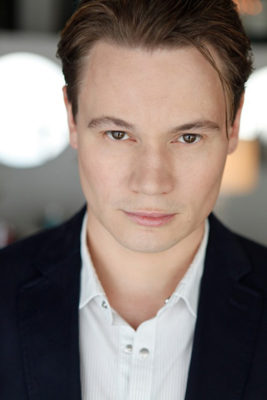 PAUL DAVID STORY      Broadway—Junius Urban in The Caine Mutiny Court Martial, Alan Strang in Equus (u/s). Off-Broadway–Ferguson/Wilkes Booth in Our Leading Lady at the Manhattan Theatre Club, David in The Basic Training of Pavlo Hummel at The Public. Regional Theaters—Will Shakespeare in Shakespeare In Love and Ken in Red at South Coast Repatory, Philip, King of France in The Lion In Winter at The Colony Theatre; Malcom in Macbeth and Philip, King of France in The Lion in Winter at the Ensemble Theatre Company, Hamlet in Rosencrantz and Guildenstern are Dead!, Ferdinand in The Tempest and Arviragus in Cymbeline at A Noise Within, Mr. Bingley in Pride & Prejudice at the Dallas Theatre Center FILM/TV: In Time, American Violet, The Undying, St. Nick, Vartan LLP, The Mentalist, Body of Proof, Nip/Tuck, and Law & Order: SVU. Directing: My Sister by Janet Schlapkohl which premiered at the Hollywood Fringe Festival and then moved to The Odyssey Theatre Ensemble. EDUCATION: The University of North Carolina School of the Arts, BFA. 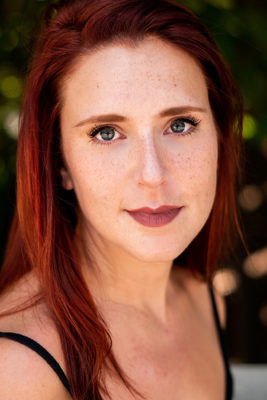 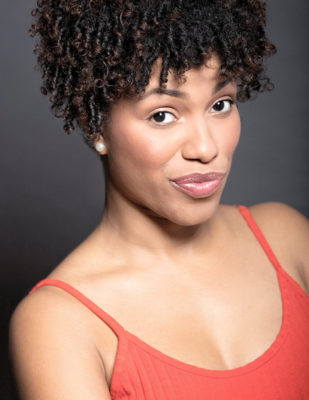 FRANCEli Chapman is making her Regional Theater debut here at CVRep. She began her stage career doing Off-Broadway in New York in high school and has appeared at the Cherry Lane Theater, Ensemble Studio Theater, and The Castillo theater– to name a few– and has worked with Katori Hall and Woodie King Jr. Recent stage credits include House on Mango Street, Den of Thieves, Blues for Mister Charlie. Ms. Chapman resides in Los Angeles where she’s a host for Maria Menounos’ network Afterbuzz TV, is a comedian on Buzzfeed’s Dominican Housewives and just finished 2 independent films. “I penned my first screen play and I look forward to heading to NYC this spring to film and star in it. Being a bilingual Afro-Latino actor it is important to tell our own stories. I’m excited to be joining the Coachella Valley Rep family.” You can follow her journey on all social platforms @celihangout 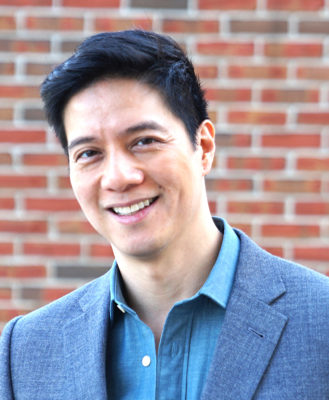 ANTHONY SALUDARES    Anthony Saludares speaks Italian tolerably. He also enjoys eating, long walks in the forest, and traveling to places off the beaten path. He once made a decent amount of money from a McDonald’s commercial, but that’s long been spent on the profligacies of youth. He can be seen being a jerk to John Krasinski in the indie feature Nobody Walks (a Sundance award winner, co-written by Lena Dunham). Anthony had the time of his life studying improv at the Groundlings and scene study with Ivana Chubbuck. He hails from Texas and thinks about his niece and nephews every day.

*James Ijames, Playwright – Philadelphia-based playwright and actor James Ijames is the recipient of The National Arts Club’s 38th Kesselring Prize, an award of $25,000 given annually to a rising American playwright. Ijames was awarded the prestigious prize for Kill Move Paradise, a play about four black men stuck in a cosmic waiting room in the after life, inspired by the growing number of slain unarmed black men and women in America today. The play was nominated for the Kesselring by the Wilma Theater in Philadelphia.   Ijames’ plays have been produced by Flashpoint Theater Company, Orbiter 3, Theatre Horizon, The National Black Theatre, Alley Theatre, and have received development with PlayPenn New Play Conference, The Lark, Playwrights Horizons, Clubbed Thumb, Villanova Theater, The Gulfshore Playhouse, Wilma Theater, Azuka Theatre, and Victory Garden. He is a 2011 Independence Foundation Fellow, a 2015 Pew Fellow for Playwriting, the 2015 winner of the Terrence McNally New Play Award for WHITE, the 2015 Kesselring Honorable Mention Prize winner for ….Miz Martha, and a 2017 recipient of the Whiting Award.