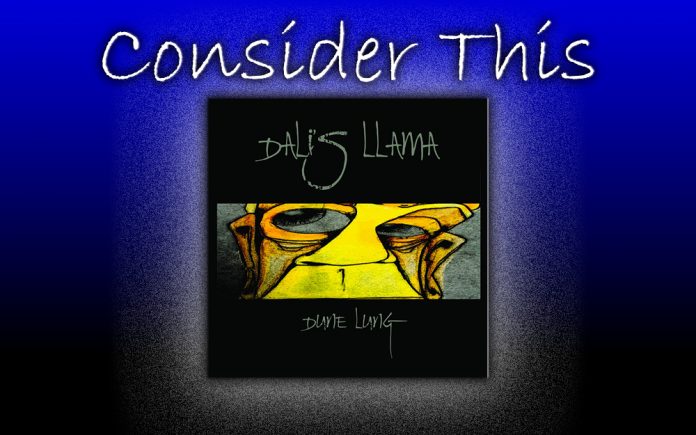 You’ve heard of Aqua Lung and Black Lung, now Dali’s Llama brings you Dune Lung. Not so much a condition, it serves as the inscrutable title of their new EP.

Desert Rock progenitors Dali’s Llama has been a going concern for nearly 30 years. The nucleus of the band has always been Zach and Erica Huskey. The pair grew up here, got together in high school, experienced life in the big city for a few years before returning to the desert to put down roots, artistic and otherwise.

Zach had begun playing guitar and making music before puberty hit. In the early ‘80s he cut his teeth in bands like the Sciotics, Cloudy Daze and The Next, the last of which was a Power trio featuring Zach on guitar Dave “Damage” on bass and Tony Brown on drums. Along with Mario Lalli, Herb Lineau and Sean Wheeler, he is an original architect of the Desert Rock sound and scene. Following high school, Erica and Zach relocated to Los Angeles. While she attended college, he began playing in bands like Long, Dead And Gone and My Pain. It was the late ‘80s and clubs that dotted the Sunset Strip adopted a “pay to play” business model. Even so, each group managed to carve out a niche in the L.A. scene. They also returned home often enough to be a part of the clandestine (now legendary) Generator parties organized by Mario Lalli.

But Zach quickly burned out being just part of a band. Yearning for autocracy, he began teaching Erica the bass. Following a brief spell living in Orange County, the couple returned to the desert for good in 1993. Recruiting drummer Johnny Moreno, they formed Dali’s Llama.

In just under three years, Dali’s Llama recorded three amazing albums, Pre-Post Now, Creative Space and Being. Each album was crisp and compendious, redefining a Punk/Power Pop dynamic that was pithy and punctilious. On Being Johnny was out and Ian Dye stepped behind the kit. For the next several years the band would rotate drummers with a ruthless, nearly, Spinal Tap-esque efficiency.

As their family began to grow, Erica stepped away from her bass duties and Zach shifted focus and formed Primordial Blues, which recorded two albums. Going solo, he released three largely acoustic albums. But by 2005, Dali’s Llama was on the comeback trail, with the additional distaff energy of drummer Robin Crewell and wunderkind guitarist Josh Rowell.

Their fifth long-player, Chordata, arrived not long after, demonstrating a surprising heaviosity. The next few efforts, Full On Dunes, Sweet Sludge and Raw Is Real leapt headfirst into the murky mire of down-tuned gloom. By 2010, the band made a sharp left turn with Howl Do You Do. A playful tribute to Garage Rock and Psychobilly, it featured guitarist Joe Dillon, (forever) drummer Craig Brown and production work from Desert Rock renaissance man, Mikael Jacobson.

2012 saw the band slither back to the sludge for their 10th album, Autumn Woods and that remained the aural blueprint for Dying In The Sun and the Blossom EP, which arrived in 2016 and 2017, respectively. There was another paradigm shift with 2019’s Mercury Sea, which exhibited a lighter touch even as lyrics seemed to straddle the line between mid-life crises and second childhood. Now Dali’s Llama is back with a four song EP, mystically entitled Dune Lung.

The opening cut, “Nothing Special,” unfolds slowly, churlish guitars are buttressed by spidery bass lines, lilting banjo notes and a blunted backbeat. Flipping the typical song-structure script, Zach executes a face-melty solo within the first minute. His trademark yowl appears almost two minutes in, as he offers this withering rebuke; “You thought you were special somehow, that you were unique among the rest, but now it’s over, open your eyes, gotta let the truth kill those lies.” Grizzled guitar riffs intertwine on the break, before a slithery guitar solo downshifts into a hypnotic groove. Clocking in at six minutes, it is the EP’s magnum opus.

On “Complete Animal,” fuzz-crusted guitars cantilever atop roiling bass, see-saw rhythm guitar and a bludgeoning beat. Although Zach was named “Most Curmudgeonly Front Man” in the latest CV Weekly poll, here, he displays his softer, squishier side. Lyrics like “I need you, I want you, I wanna see you” seem to pay homage to his bass player (who is, conveniently, the mother of his children) and celebrate “another trip around the sun” together. Guitars squall, snarl and shudder on the break, (what, you were expecting Air Supply?) Zach hasn’t completely let down his guard when he insists “Oh fuck it, I’m an animal, and I’m complete.” Duly noted.

“Merricat Blackwood” takes its inspiration from Shirley Jackson’s gothic mystery, “We Have Always Lived In The Castle.” Jagged shards of guitar are supplanted by tensile bass and a walloping rhythm. The arrangement is sludgy, swirly and suitably spellbinding. Zach’s swoony croon is necromantic and urgent as he supplicates the object of his affection/obsession; “Put down your spells and run with me.” The action accelerates on the break as prickly power chords ride roughshod over wily bass lines and a bulldozer beat.

The EP closes ‘S.T.D. (Suits),” Distorto guitars fall in lockstep with slippery bass and a brawny beat. Ever the diplomat, Zach takes aim at a music industry which has been colonized by “P.R. firms, marketing twits and heretics.” In case you missed the point, he quickly doubles down; “Big money and sacred cows, flies swarm on the shit that they push/Don’t listen man, they’ll stone you to deaf.” (Dude, don’t sugarcoat it, say what you think). On the break, keening guitars shiver and quake over the viscous thick freakness before powering down with a final drone-y tailspin-y note.

Recorded at Bassline studios, the EP was produced by Zach, Jake Sonderman and Mikael Jacobson, who also added some banjo to the opening track. Dune Lung offers a taste of what has become the band’s signature sound. With Covid 19 hopefully in the rearview (don’t be a wuss, get your vaccine), Dali’s Llama should get the chance to record a new long-player and book some live shows before 2021 bites the dust.