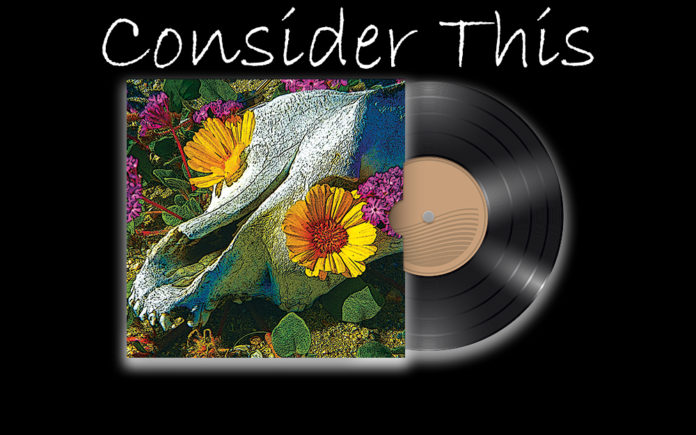 To the world at large, the Desert music scene centers on two groups, Queens Of The Stone Age and Eagles Of Death Metal. It might seem efficacious to bask in their reflected glory (or notoriety, in the case of the latter). But it’s also somewhat reductive. Genuine Desert music, farm-to-table (so to speak), happens here daily with the musicians who live here and create music here.

Dali’s Llama has been a standard bearer of Desert Rock for more than a quarter of a century. The nucleus of the band, Zach and Erica Huskey, grew up here, briefly left for life in the big city, but returned in the early ‘90s, put down artistic roots and began raising a family.

Zach started making music as soon as his, um, voice dropped and made his bones in bands like The Sciotics, Cloudy Daze and The Next. He is a pioneer, a progenitor alongside Desert legends like Mario Lalli, Herb Lineau and Sean Wheeler. Zach and Erica first got together in high school, and once she began college they both headed to Los Angeles.

Although the late ‘80s music scene in L.A. was hampered by the “Pay-To-Play” practice that dominated the Sunset Strip, Zach still managed to carve out a niche in bands like Long, Dead And Gone and My Pain. He also returned to the desert often enough to play the covert Generator Parties that Mario Lalli organized.

But he became frustrated with his role as just a member of the band. Looking for a little more autonomy, he taught Erica to play bass. Following a stint in Orange County, the pair returned to the Desert in 1993, and formed Dali’s Llama with Johnny Moreno on drums.

Their first three albums, Pre-Post Now, Creative Space and Being were crackling and concise, drilling down on a Punk/Power Pop paradigm in just under three years. Being featured drummer Ian Dye, the first in a series of rotating, Spinal Tap-esque drummers. Zach being Zach, he quickly shifted gears, adding drummer George Rubacava and rhythm guitarist Eric Overton and writing and recording the abstract and experimental Color Of Apples EP (listen up for that hubcap solo).

Once they started a family, Erica took a hiatus and Zach channeled his energies into a side project, Primordial Blues, recording two records, followed by three solo, largely acoustic efforts. By 2005, Dali’s Llama was back, with the additional distaff energy of drummer Robin Crewel and guitarist Josh Rowell. The fifth DL full-length, Chordata appeared, exhibiting a crisp heaviosity. The next few albums, Full On Dunes, Sweet Sludge and Raw Is Real took a deep dive into the gloopy glop of down-tuned doom.

Two years later there was a brief respite with the playful Howl Do You Do, a deft homage to Garage Rock and Psychobilly that featured the addition of (forever) drummer Craig Brown and Guitarist Joe Dillon, plus production from Desert Rock renaissance man Mikael Jacobson. By 2012, the band has slithered back to the sludge with their 10th album Autumn Woods. That remained the template for Dying In The Sun and the Blossom EP, released in 2016 and 2017, respectively. Now the band has returned with their newest effort Mercury Sea.

The record opens tentatively with “Weary.” Chunky percussion and skittish guitar weave in and out of a slightly soporific melody. Although Zach’s vocals feel weirdly enervated, sandblasted guitar riffs keep the momentum chugging along. On the break, guitars pivot between slabs of fuzz and sunnier AOR chords. Cryptic lyrics allude to the struggle to rehabilitate the nearby Salton Sea; “Sun drowns in the Mercury Sea, a dead fish in the Mercury Sea….gotta fix this thing before it sings, but we’re so weary.”

Uncharacteristically, love is in the air on several songs. Who knew there was a soft and creamy center beneath Zach’s churlish outer shell? Careening out of the speakers like a long lost “Nuggets” track, “She’s Not Here” is powered by a locomotive rhythm and whiplash Guitar. Initially, it’s all sweetness and light; “I dig this chick and she digs me back-I think so,” but soon the other shoe drops. The object of his affection is something of a Kardashian-in-training; “She calls may car a piece of shit-well, so what? Wants me to pay for her plastic tits, don’t have it/All I know is she likes that money, and I never get to see my honey.”  Zach’s staccato vocal delivery is mirrored by angular guitars that squall and buzz with athletic freneticism. The instrumentation gathers speed on the outro before stopping on a dime. The lyrical disappointment is camouflaged by the Garage-y grooviness.

Conversely, there’s an airy elasticity to both “Love Gets You High” and “When Ember Smiles.”  “Love…” weds a churning rhythm and roiling bass to shards of ‘70s “Smoke On The Water”-style guitar. Although Zach’s strangulated vocals seem anguished, maybe that’s how he conveys enthusiasm. His sweet talk is blunt and to the point as he attempts to renounce real world responsibilities; “Come on girl and quit that job now, let’s try to be free, we don’t have to live like this/Take a shot and ride with me.” Taking a page from Joe Perry’s book, he lets the music do the talkin, as the drums accelerate wildly on the bridge, locking into a blitzkrieg beat, and guitars wah-wah and fray before unleashing a corrosive solo.

“…Ember…” is a cheerful encomium to a girl who is “a smile machine.” If Boston ever collaborated with Smashing Pumpkins, it might sound a bit like this. Sunshiny Guitars whoosh and shimmer, splitting the difference between ‘70s AOR and “120 Minutes”-era Alternative. Guitars stack on the break, tightly spiraling over wily bass runs and a walloping rhythm.

Finally, there’s a Clash-tastic urgency to “She Makes The Desert Seem So Blue.” A pummeling backbeat connects with Hornet’s nest guitars that whip up into a “Sabre Dance” frenzy, before downshifting into a galloping rhythm. The lyrics spotlight an enigmatic woman who’s “like the ocean, likely to pull me down, she doesn’t mean to, and yet she smiles as I (drown).” Muted keys, courtesy Mike Jacobson, shadow the chorus, then become positively banjo-riffic by the third verse. Somehow the guitar solos feel buoyant and dangerous at the same time.

Even though he was still in grade school when Nancy Reagan launched her “Just Say No” anti-drug campaign, two songs make it clear that Zach was paying close attention. Both “Timeless Tale” and “Someday, Someday” make the case for sober living.

Acoustic and electric guitar intertwine on the former, over braided bass and a headbanger beat. The action slows as Zach sketches out a familiar “Afterschool Special” scenario; “Just a little boy-inside your head that is-someone showed you how to make it all alright: rocks, needles and crank, spoons pills and powder/It’s a hell of a game, it’s a fucking shame, it’s a timeless tale.” As time signatures shift, Zach and Joe square off, layering distorto riffs over corrosive chords before delivering this withering denouement; “A thousand little pricks, a thousand lines of blow/Passed around the room by the ring in your nose.”

The latter displays a mosh-pit intensity that recalls ‘80s antecedents like Dinosaur, Jr. and Sonic Youth. Slashing power chords collide with boomerang bass and a pile-driving rhythm. Chemical companionship has supplanted love and jeopardized financial independence; “She’s got a brain full of cocaine, can’t pay the rent on the A-Frame, beer cans and bottles where there once-once once was love.” Scattershot riffs ricochet through the melody on this cautionary tale.

Other interesting tracks include the prickly pleasures of “Goblin Fruit,” which shifts from breezy to skronky in a matter of minutes. Zach unleashes his (not so) inner curmudgeon on the Power-Punk crunch “Choking On The Same” and the blistering take down of “The Feeling Is Mutual.”

The album closes with the marauding marital ennui of “All My Fault.” Guitars snarl and growl as Zach spits out a snarky, sarcastic mea culpa. Every “I’m Sorry” drips with venom, matching his disingenuous tone. As the melody winds down the tempo slows, Zach unspools a cathartic solo that nearly succeeds in washing away the awkward eavesdrop-y feelings that envelope the listener.

“Mercury Sea,” was produced by Mikael Jacobson and Zach, and recorded locally at Bassline Music. There’s a lightness to the melodies and arrangements that recall the band’s salad days.  The musical sangfroid offers a respite from the down-tuned  sturm und drang that has characterized their last few records. Walking a tightrope between a mid-life crisis and second childhood, Dali’s Llama has made an amazingly great record.