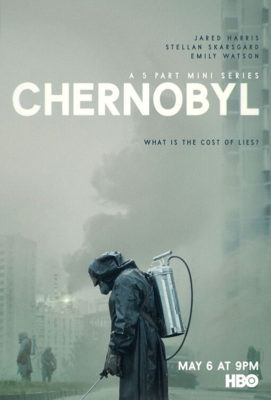 Screenwriter Craig Mazin is best known for his work in comedies.  He wrote the last two movies in “The Hangover” franchise.

His extraordinary five-part mini-series about the 1986 Chernobyl nuclear power plant disaster is a gripping and terrifying, cautionary tale of  a place and time in which state secrets are more important than the welfare of the people.

The immensity of the disaster in what is now Ukraine spread to Sweden.  Hundreds of thousands had to be evacuated.  Estimates on the death toll ranged well into the thousands,  although the “official” count was only 31.

At the time, the Soviet Union was desperate not to let the Americans know the extent of the damage.  Same for the ineptness of its nuclear reactor set-up.

Mazin’s script makes it clear the multiplying mistakes and the numerous failed cover-ups are a metaphor for a corrupt empire in an age of deception and deceits.  “We are now living in a global war on the truth.  The debasement of the truth is the scariest thing of al.  Scarier than the lies,” says Mazin

Don’t miss this gripping and relevant film that left about 2,000 square miles uninhabitable and was one of the defining moments of the 20th Century.  Now streaming on HBO. 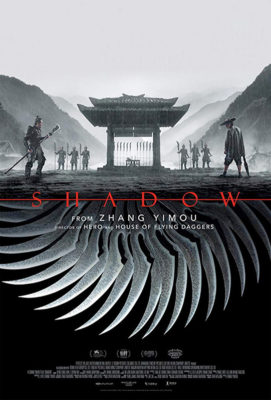 Zhang Yimou’s visually stunning wuxia-styled action melodrama about an impetuous young king whose top commander poses an existential threat is complexly plotted and not always easy to follow, but, no matter, it is the gorgeous, stylized look of the film that makes it worth seeing.  Not unlike the classical Chinese ink-brush art of great Chinese painters, the film incorporates a wonderful color palette of black, white and seemingly infinite shades of gray.  The only colors are bright splashes of  blood and the subtle hues of skin tones.

It’s difficult to lay out the plot in a linear and coherent manner.  It’s about a king, his double, the commander and the commander’s musician wife Madam, who may be the only person who actually knows what’s going on.

Everything takes place in a magical realm.  But underneath it all, this intellectually challenging and breathtakingly beautiful film with it’s exquisitely choreographed action sequences is a tone poem about what’s real and the pleasure of solving that puzzle.  Recommended. 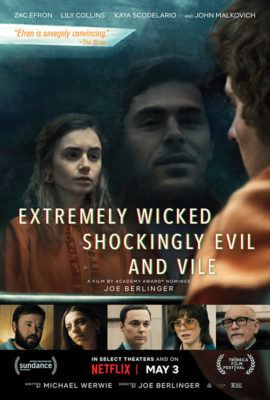 Director Joe Berlinger’s  absorbing true crime drama is based on Liz Kloepfer’s (writing under the name Elizabeth Kendall) 1981 memoir (The Phantom Prince: My Life with Ted Bundy) about her relationship with a handsome, charming too-good-to-be true boyfriend who was in fact a serial killer.  Although the movie leaves many questions unanswered, it does not totally glamourize Bundy, even though it sanitizes him just enough to make the story palatable and the narrative a tad more believable and relatable.

There’s no question that watching a psychopath we know is a murderer from his adoring girlfriend’s perspective is galvanizing.  Lily Collins is compelling and hugely sympathetic as Liz and Zac Efron is charismatic and chilling as Bundy.

It was Kloepfer who eventually tipped the police off regarding her boyfriend’s possible role in several murders; however, he was not considered a serious suspect.

Berlinger, who made his name as a true-crime documentarian is a great choice to helm this dark and intense story.  Now streaming on Netflix.