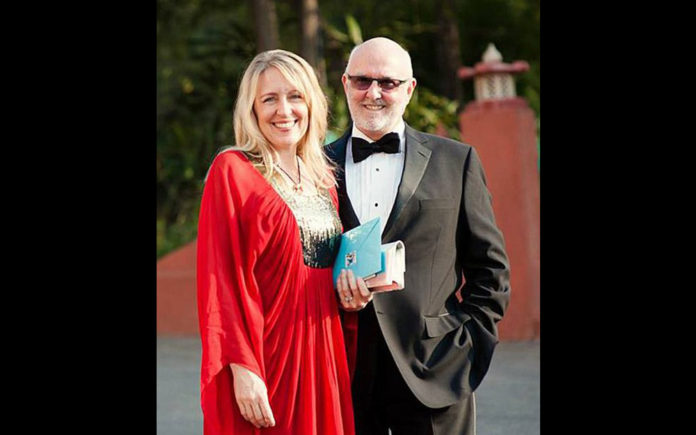 Valentine’s Day is all about love, and that includes the love we share with our 4-legged family members.  One amazing Coachella Valley couple, David and Leigh Kirk, are bonded by their love of feline creatures and their commitment to saving them.

The couple met by chance and fell in love while both working in Washington D.C.  David was an ardent dog lover who never owned a cat until he met Leigh and her wonderful cat named Poodie.  David was quick to fall in love with Leigh.  He also acquired a love of cats by living with Poodie, rescued as a tiny feral kitten from the streets.

In 2005, the Kirks moved to the Coachella Valley, and Leigh began volunteering at the Coachella Valley Animal Campus, our county shelter.  Leigh discovered that the vast majority of cats in America’s public shelters never make it out alive.  They realized they could save some of them by forming their own 501(c)3 charity, and www.ForeverMeow.org was launched.

In 2014, David applied his skills acquired as an executive in the Silicon Valley computer industry to develop power point presentations about the crisis facing our homeless dogs and cats.  The couple attended Best Friends’ “No More Homeless Pets” conferences, becoming experts on TNR (Trap/Neuter/Return) for community cats.  They assumed a leadership role when animal welfare groups banded together to create a “No Kill Coachella Valley”.

The Kirks added a kitten nursery in 2015, one of less than a dozen in the entire country, to their rescue operation.  They partnered with Riverside County Department of Animal Services to save almost 700 cats and kittens that year from euthanasia, often accompanying animal control officers in the field to pick up animals.  Feeding and medicating underage kittens means 18-hour days, and the couple fought to save every frail tiny creature.

As their rescue efforts expanded, David realized, “By early that year, we realized that we had jumped right into the deep end, and the tsunami that is the Coachella Valley kitten season was crashing around us.  As much as we’d researched, planned, and visited other kitten nurseries and connected with neo-natal experts, here we were in this thing together, and not sure at all if we could swim.  But that’s us – when we discover shared passion, decisions of the heart overrule the fears.  We continued rescuing cats because life without that shared, burning passion would be less than complete.”

Rescuing animals is a labor of love.  David and Leigh Kirk are blessed to be working as a team, where each of them understands the heart and mind of an animal rescuer.  Leigh sums it up, “We keep rescuing cats because the joy we get from saving them and enriching the lives of their adopters melts away all the personal sacrifices.”

In 2017, Leigh applied to veterinary schools to become a DVM, planning to focus on providing low cost spay and neuter surgery.  Leigh explains, “The solution to this overwhelming problem is the capacity to do more spay and neutering in our Valley when so many of our low income residents simply cannot afford it.”

Leigh was accepted into three veterinary schools, but despite the allure of an education on a balmy Caribbean island, chose Colorado State University.  CSU is considered by many as one of the top feline veterinary schools in the world.  The new chapter in their lives commenced as the couple undertook a non-stop eighteen-hour drive across the Rockies to Fort Collins with nine cats on board.

The Kirks celebrate Valentine’s Day 2019 in Colorado this week.  Leigh is 12.5% complete on her journey to become a vet, and serves on the board of the CSU Shelter Medicine Club.  Always by her side, David is developing material to prepare veterinarians for Shelter Organizational Strategy.  We look forward to their return to the Coachella Valley, knowing they will continue to save and improve the lives of our animals.