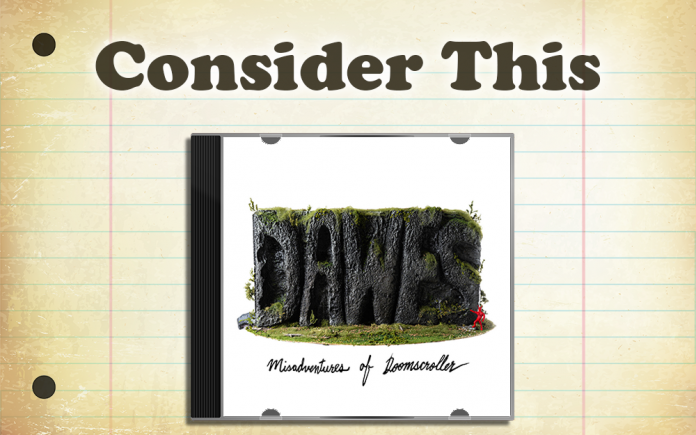 Even at my advanced age, music still has the power to surprise and delight me. It can happen when I discover a new(ish) artist like Jake Wesley Rogers, Silk Sonic or Lizzo. Even more mind-blowing is when a favorite band manages to flip the script, redefining their approach and expanding their musical horizons. Such is the case with the latest Dawes album.

Taylor Goldsmith formed his first band, Simon Dawes, with his pal Blake Mills back in Junior High. Taking inspiration from disparate influences like The Kinks, Electric Light Orchestra and The Strokes, they released their debut, Carnivore in 2006, toured with high-powered acts like Incubus and Maroon 5 and promptly broke up.

Taylor and his younger brother Griffin came by their musical talent naturally. While they were growing up in L.A.’s San Fernando Valley, their dad Lenny was a successful realtor, but during the ‘70s he spent time fronting bands like Sweathog and Tower Of Power. Shortening their moniker to Dawes, Taylor recruited bassist Wylie Gelber, his brother stepped behind the drum kit and eventually Tay Strathairn joined in on keys. Inspired by the jam sessions they had attended at musician/producer Jonathan Wilson’s Laurel Canyon lair, their new songs veered away from the Punky energy exhibited as Simon Dawes and zeroed in on a more rustic, organic style that drafted off Laurel Canyon pioneers like The Byrds, Joni Mitchell, Crosby, Stills & Nash, Jackson Browne and Flying Burrito Brothers, as well as East Coast antecedents like Bob Dylan and The Band.

Their 2009 debut, North Hills, along with 2011’s Nothing Is Wrong, offered a fresh spin on the bucolic, back porch, Big Pink-flavored Country/Folk Rock that originally incubated back in the late ‘60s. Their third effort, took a sharp left turn, substituting good ol’ country comfort for a more lean and literate sound.

Throughout the years, Taylor and the band have collaborated with Rock elder statesmen like Elvis Costello, and Phil Lesh, as well as Americana stalwarts like Rhiannon Giddens, T-Bone Burnett and My Morning Jacket’s Jim James. Recently he experienced a “pinch me,” moment when he was on stage as part of a coterie of friends that included Brandi Carlile, Wynonna Judd, Lucius and Marcus Mumford, backing Joni Mitchell during her surprise set at The Newport Folk Festival. Now Dawes has just released their eighth long-player, a seven-song suite, pithily entitled Misadventures Of Doomscroller. It rumbles to life with “Someone Else’s Café/Doomscroller Tries To Relax.” A tumbling percussive fanfare links up with a hooky electric piano refrain, breezy guitars and brisk bass lines. Taylor’s buttery tenor is deceptively soothing as he quietly excoriates keyboard warriors, QAnon conspiracists and the radicalized foot soldiers that do their bidding; “You can call yourself a living god, if it rallies up the troops, reinstate the firing squad, lace up the combat boots…you can make ‘em call you Beelzebub, you can make them call you chief, make some face paint out of baby blood, wear a necklace out of teeth.” A stinging guitar solo slashes through, weaving between meandering piano notes and whooshy keys, accentuating the lyrical rebuke. The instrumentation briefly powers down on the break, before executing a stylistic 180. Griffin pounds out a Gene Krupa-esque tribal tattoo on his kit and the arrangement kicks into interstellar overdrive, landing somewhere between Jazz fusion pioneers The Yellowjackets and the spectral jams that characterized The Grateful Dead’s most organic flights of fancy. Buzzy keys pinball around chromatic guitars for an extended pas de deux. The remaining minutes of the song pivot between lush harmonies, churchy organ, soaring guitars and elegiac piano. In these hollow days of destructive, divisive, narcissistic hubris, this clear-eyed caveat rings true; “From the rock of the cradle, ‘til we’re dead in our graves, we’re all waiting tables in someone else’s café.”

“Comes In Waves” is a minor key wonder, powered by willowy guitars, slapdash bass, zig-zagging keys and a hopscotching beat. As the lad-back arrangement ebbs and flows, lyrics unspool a litany of angst and self-doubt; “I’ve been feeling like a light bulb, when the filament won’t glow, surrounded by a darkness, cause the current’s moving slow, am I losing my intensity, is that feeling here to stay, but that’s the thing about electricity, it comes in waves.” The rippling “Feel Flows-y” harmonies that wash over the chorus have a palliative effect, momentarily clearing the emotional cobwebs. The arrangement accelerates slightly on the break, as iridescent guitars shiver atop percolating percussion allowing for some cautious optimism; “I think the grip is getting looser, I think they’re giving us a try, if you feel good about the future, then baby so do I, let’s keep an eye on all our enemies, while we’re popping the champagne, cause that’s the thing about victory, it comes in waves.” A final, squally guitar solo adds a fleeting moment of caustic bite.

There’s a lithe muscularity to “Everything Is Permanent.” The lyrics offer a cogent commentary on the weird, and somewhat intrusive connectivity of social media. Within minutes, we’re all in on the same joke, witnessing some scandalous behavior or collectively mourning a loss, nothing occurs in a vacuum anymore. Over propulsive keys, gritty guitars, sinewy bass and a four-on-the-floor backbeat, Taylor immediately cops to coming from a different era; “A product of my time zone, mix CDs and dial tones.” The harmonies that coalesce on the chorus recall the sleek and soulful ‘70s era blend of Yacht Rock stalwarts like Loggins & Messina and The Doobie Brothers. Perspicacious verses cattily catalogue the ephemera that keeps us tethered to our devices; “the single that gets overplayed, the bubbles in your third rose,’ a wilderness of gossip…a wayward strand of anger, at some controversial stranger, who swears the virus didn’t exist…the home life of celebrities, subliminal obscenities, the politics of Christmas trees, everything is permanent now.” The instrumental break finds the four-piece navigating a sonic soundscape that’s equal parts Jazz and Prog-Rock. Prickly guitar riffs whir and clank on the break, wrapping around ascendant piano chords and a pummeling back-beat. Just as swiftly, tempos realign, wah-wah guitars catapult across a cantilevered drum break. The final bon mot takes aim at celebutantes and influencers with an unquenchable thirst for attention; “Did you really need to cry, or be seen crying?”

“Ghost In The Machine” is the album’s tour de force. Anchored by a syncopated double drum kick, the percussive extravaganza is matched by rollicking piano runs, serpentine guitar riffs, gauzy organ and nimble bass lines. Although the song takes its title from philosopher Gilbert Ryle’s description of Rene’ Descartes’ mind-body dualism (and the fourth album from The Police), the lyrics offer a picaresque pocket history of the band; “Standing right outside The Echo, when we were working for the door, assuming all our dreams were brighter than the bands we played before, but you could see it in their hunger, you could hear it in their screams, they too were just trying to make contact with the ghost in the machine.” A thick freakiness slab of Jazz, Funk and everything in-between, it manages the not-so little feat of distilling the synergy of Mad Dogs, Englishmen, Lowell George and company, Ben Folds Five, The Allman Brothers, Dixie Dregs and Wayne Shorter. Honky-Tonk piano collides with scorching guitars, the conga-fied rhythm on the break hugs a series of aural switchbacks that are knotty and complex one minute, elegant and quicksilver the next. This song has been lather-rinse-repeat at ye olde Maxi-Pad for a solid week.

“Joke In There Somewhere” blends synchronized, sun-dappled guitars, slippery bass, shimmery keys, burnished piano and a hiccough-y beat. The lyrics display a “Day In The Life” authenticity, quietly accumulating the mellow moments and keen observations that make up a busy, post-Covid day. Whether it’s running errands; “I see the corporate coffee house puttin’ up their Christmas decorations, commuter cars all waiting at the light, a line outside The Roxy, full of hopeful conversation, some local band is playing there tonight..” or meeting his brother for a drink and parsing convoluted movie plot points; “…I tell him about this movie and I didn’t get the ending, why do they let the creature get away? He reminds me that all it is, is costumes and pretending, but there must be something else they’re trying to say.” As the arrangement builds to an artful crescendo, the conversation shifts and the brothers share a brief epiphany; “…He says ‘every time we’ve sat here, getting nervous for the future, we’ve ended up with some version of okay, these songs that we are singing shouldn’t give in to the rumors, they should give some kind of strength to meet the day,’ but there’s a joke in there somewhere, a joke in there somewhere, a joke in there somewhere, we just gotta find a way to laugh, we just gotta find a way to laugh.”

The dense verbosity of ‘…Joke,” leaves little room for an instrumental break, so the Dawes dudes conveniently roll it over into the next track, “Joke In There Somewhere (Outro).” A spacy hang that harnesses acrobatic guitars, painterly piano, sparkly keys and spidery bass to a thunking beat. Its appeal is two-fold, allowing the listener to stay rooted in the moment, and clocking in at under two minutes, it functions as a palette cleanser, a musical sorbet for the album’s ambitious closing cut, Sound That No One Made/Doomscroller Sunrise.”

Almost a minute of ambient sound gives way to Beatlesque guitars, plunky bass lines, fluttery keys and a caroming backbeat. While the melody, instrumentation and arrangement offer a bit of a cosmic exhale, thorny lyrics yearn for a bit of emotional equilibrium as “the static starts to fade…” the elusive quest “to find that perfect frequency and then forever ricochets into a sound that no one made.” Waspish guitars and stately piano intertwine, bookending each verse, but quickly make way for Wylie’s harmonic, almost (Jaco) Pastorious-like bass runs. Skronky guitars and cascading keys dominate the expansive break before lyrics candidly confess “I just need someone who will listen through this strange and dark existence, or the consolation of knowing that you’ll try.” By turns bleak, beatific and cinematic, it’s a glorious finish to densely nuanced, rich and rewarding ride.

Produced by their Laurel Canyon compadre, Jonathan Wilson, these Dawes dudes have turned yet another corner, creatively speaking. Most of the songs stretch out past the six minute mark, but there’s a grace and economy to the shred. Sleek, sophisticated and wholly organic, Misadventures Of Doomscroller, is equal parts sprawling and succinct. Somehow, they’ve accidently achieved the impossible and created a 21st century equivalent to Steely Dan’s Aja. Yes, it’s that good.