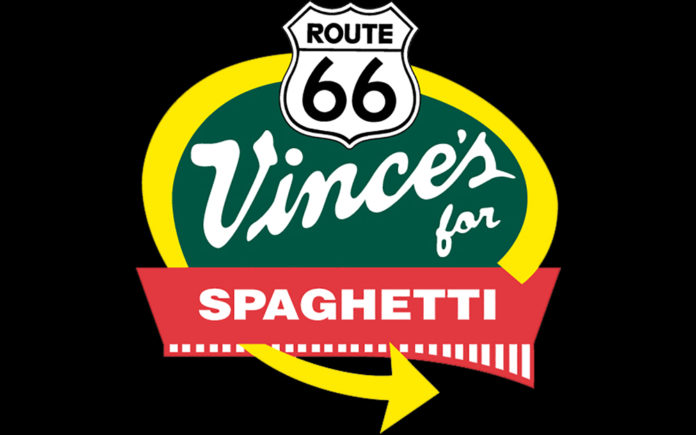 There’s no doubt that we have fabulous Italian restaurants in the Coachella Valley. But if you’re up for a spaghetti adventure and want to get out of town to mix it up a bit, Vince’s Spaghetti in Rancho Cucamonga is well worth day tripping for.

Ever since my boyfriend and I have been together, I have heard his consistent plea for us to go to his beloved Vince’s Spaghetti, which he has been going to since he was a little kid. The man even had a now tattered T-Shirt from the place that he bought many years back. I mean really, when you purchase a shirt with the eatery’s name on it, it must be something special. So last weekend we hopped in the car and started making our way to Rancho Cucamonga, where Vince’s Spaghetti sits in all of its noodle and sauce glory, on Foothill Blvd, the original Route 66 (pretty cool). 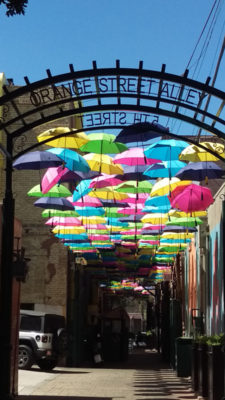 On our way to Vince’s, we took a pit stop to visit historic Redlands. The downtown area is over a century old, established by the anchor of the University of Redlands. The area off of 6th street is adorable. The main tree lined street is populated with quaint shops and restaurants and has a small town feel. Duck down in on 5th street and you will find Orange Street Alley, a colorful alley with a vibrant umbrella ceiling, housing some pretty cool spots such as The Copehouse Bar & Bistro (www.copehouseredlands.com), which completely reminded me of New Orleans with its intimate candlelit interior and alley side patio. The Copehouse is housed in the historic Cope Commercial Building built in 1903. The building is also home to other cool spots such as the Underground and The District (www.thedistrictredlands.com) and Cheesewalla (www.cheesewalla.com), a grilled cheese lover’s paradise.

After exploring the downtown area, we took a drive on the adjacent residential streets, discovering a treasure of vintage craftsman homes one after another. It was like being in the Midwest. From the hometown vibe, to the gorgeous architecture, Redlands is has much to offer, and we look forward to spending more time there in the future. But we were on a spaghetti mission that day, and said good bye to Redlands as we continued on our journey to Vince’s Spaghetti. 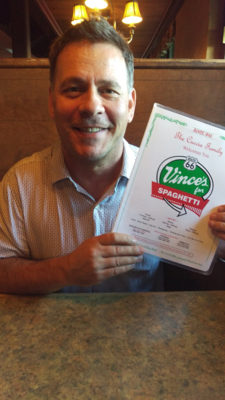 The original Vince’s Spaghetti opened in Ontario on Holt Blvd by the Cuccia family in 1945, as a tiny produce and French Dip stand. Old time tales say that the spaghetti part of the equation was added when one of the brothers was spotted by a customer eating the off menu spaghetti at the counter, and when asked if they could have some spaghetti too, the owners obliged and so the story goes. The spaghetti is slathered with the family’s red meat sauce, as are other dishes such as their mostaccioli and lasagna. Although it seems simple enough, there is just something deliciously lingering in their sauce, which is almost hypnotic, bringing customers back over and over again. The Holt Blvd location has expanded over its 73 years, and Vince’s itself has grown with a large location in Rancho Cucamonga (our destination) and in Temecula.

We exited the 10 freeway and made our way onto Euclid Ave through Upland. Like Redlands, Upland is beautifully landscaped with craftsman styled homes, mature trees and has that inviting home town allure. We connected to Foothill Blvd, which as I previously mentioned, is the part of the original Route 66, and landed at the purpose for our trip. As we approached, my boyfriend became giddy, no doubt immersed in fond memories of dining at Vince’s.

It was about 4:30pm and the parking lot was already full, with an interior waitlist to match. The efficiency of the restaurant made our wait a short one, and we were seated at a window booth right in the middle of all of the dining action, watching customers parade by. The menu was everything that my boyfriend said that it would be, straight forward and simple. It being my first time there, I let him take the lead and mirrored his order. Two spaghetti dinners, with minestrone soup, salad with their tangy Italian dressing, a half order of spaghetti with meat sauce, garlic bread, and oh yeah, one meatball on the side. If you’re thinking that it’s a lot of food, it is, and there were to-go boxes involved at the end of our meal. 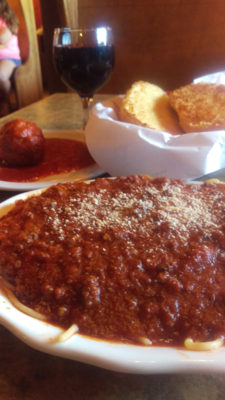 Everything is served on metal carts at Vince’s, the sound of the clanking fills the dining room as a sort of service symphony. Our soup and salad came out first, and complimented each other. Their minestrone incorporates barley instead of pasta, providing a heaty texture, and the salad with the tang of the vinegar becomes slightly addictive. The spaghetti soon followed with large pieces of garlic bread and our meatball that we wanted to share. It’s all in the sauce, the rich meat sauce has a homey depth, comforting in its make-up and hasn’t changed in the 73 years that Vince’s has been making it. My boyfriend’s reaction to his plate of pasta cemented that fact, as he reveled in each bite.

As if we hadn’t had enough food, why not top it off with some spumoni ice cream? It turned out to be a tasty decision, gently cleansing our palate from the gravy like tomato meat sauce.

With our to-go bag in hand, we paid at the cashier, and went over to get my boyfriend another Vince’s T-Shirt to mark the occasion, as his other one was more than ready to be retired.

We left Vince’s Spaghetti sated in many ways, and I was so happy to go somewhere that my boyfriend considered dear to him. And that’s really the big take away from Vince’s, besides the expanded waist line. It is that it represents tradition and consistency. A place where people can count on to stay the same, and deliver time and time again. A place that you can go to as a child, and it will still be there to take your children to. There aren’t many places that can make that claim. It’s more than a restaurant, its home to many.

If you’re feeling like taking a drive out of town for a food adventure, I highly suggest Vince’s Spaghetti. It’s great for a families and couples alike, and well worth day tripping for.