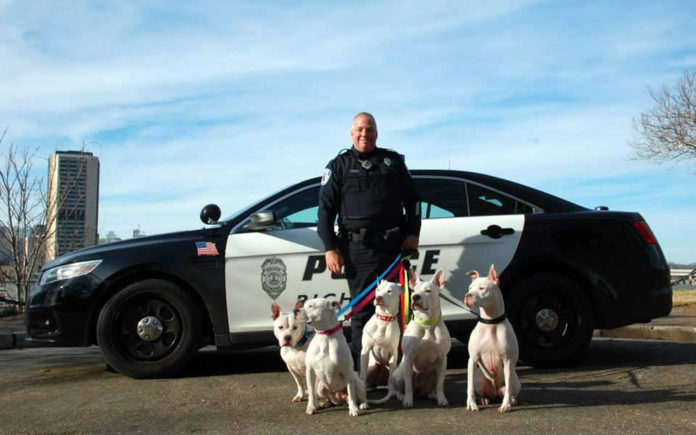 You may have seen this wonderful photo on your Facebook newsfeed.  The story and photo of Mac Adams, a Virginia police officer and his five handsome white dogs, went viral this week on Facebook receiving over 15,000 shares.  The dogs, Pickles, Nea, Piglet, Opal, and Mortimer are fabulous looking animals, but what makes this story noteworthy isn’t their color or breed, but rather the fact that they are all deaf.  Within a week of its posting, this photo became the most commented, liked, shared and viewed post in the Richmond Police Department’s Facebook history.

When his pet Mastiff passed away, Officer Adams was interested in getting another dog.  One of his friends who worked at the Richmond Animal Care and Control shelter told him about a dog there who needed a home.  Adams knew that the dog’s chances of getting a home were slim, both due to her bully breed status and her deafness.  Animals with disabilities are usually the last ones adopted at a shelter, and frequently are euthanized.

Officer Adams explained his decision to adopt Pickles, “She was so cute that I couldn’t let that happen to her.”  He had no prior experience with deafness in dogs, but “I was just like ‘We’ll just figure this out.'”  Figure it out they did.  Adams and his wife Donna went on to add four more deaf bully dogs to their family. Two of the dogs they adopted were posted on the website of Deaf Dogs Rock, a nonprofit rescue organization.

Adams makes his adoption story sound like it was an easy accomplishment.  “Deaf dogs don’t know they’re supposed to hear.  Once you figure out a way to communicate with them, you’re good to go.  They’re very intelligent, very smart dogs, and taking the auditory stimulation out of their daily lives makes them much better dogs.”  They use sign language to communicate with the dogs, and touch them or stomp on the floor to get their attention.

What causes deafness in dogs?  A lot of the same things that impact hearing ability in humans also affect our four legged best friends.  A dog can become deaf due to an ear infection, injury to the ear, exposure to loud noise, or deafness may occur gradually in old age.

The fact that Mac Adams’ deaf dogs are all white is no coincidence.  Dogs with white or merle coats are predisposed to congenital deafness.  Breeds that commonly have the gene that causes deafness and white coats includes Pit Bulls, Dalmatians, and Boxers.

Deaf dogs get along better in the world than one might think.  Dogs view the world differently than humans and communicate with their environment in the following order, (1) Smelling, (2) Seeing, and (3) Hearing.  In humans this order is reversed.  The sense of smell in dogs is 1,000 to 10,000 times more sensitive than that of humans.  For a dog, smelling things is like “reading a book” from which he extracts a great deal of information about the world around him.  Once a dog loses his hearing, his ability to see and smell becomes even more enhanced.

A deaf dog, or any other animal with a disability, should never be pitied.  Dogs, unlike humans, don’t dwell on their condition or what they don’t have.  Everything in their world is happening NOW and what they are doing and experiencing in the moment.  They have another sense that humans lack, which is the ability to read people’s energy and emotions.  If their owner is scared, nervous, or sad they will detect this.  They need to feel your confidence, happiness and strength in order to respond to you as their pack leader.

The ideal way to communicate with any dog is through body language and energy.  Deaf dogs in particular need fewer words and more hand signals along with a confident handler.  Provide plenty of daily exercise, teach them to heel on a leash, and train them to enter and exit all doorways after their human.  One owner of a deaf lab actually taught his animal American Sign Language, and the dog responded to dozens of ASL commands.  Show them lots of love and they will respond in kind.

Officer Mac Adams and his pack are enjoying their recent fame.  Adams now serves on the Board of Directors for Deaf Dogs Rock.  The local newspaper and television station featured their story. This family is spreading the message that deaf dogs are very capable of doing almost everything any other dog can do.  Deaf dogs hear through their hearts.