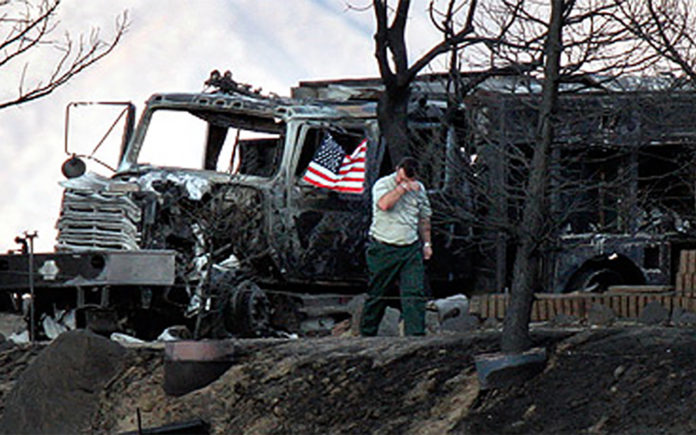 This is a reminder that wildfires do not only impact those living in the hillside areas. Red Flag Warnings bring power outages, smoke hazards, and calls for resources from all over. Make sure you are prepared as wildfire season is year round, we have just started our most intense time with Santa Ana Winds.

“I remember it like it was yesterday,” says Fire Chief Sam DiGiovanna. “I was home in Orange County leaving for work in Los Angeles. I saw the large plume of smoke to the east. In a matter of seconds it intensified. The plume expanded and rose quickly into the atmosphere. I knew something went bad. I didn’t think it was this bad …”

A Red Flag warning had been issued. A high Probability for large fire growth was in effect as conditions were high temperatures, low humidity, and Santa Ana winds.

At 1:11 a.m. resources were promptly dispatched from the California Department of Forestry and Fire Protection (CAL FIRE) to a reported Brush fire at the base of the hill in the town of Cabazon. The first in engine, Engine 24, arrived on scene at 1:18 a.m. Initially, the fire was approximately two acres in size and located on the base of the hillside. At 1:24 a.m., the first arriving Battalion Chief from CAL FIRE reported the fire had grown to approximately ten acres with a rapid rate of spread, and had crossed the road east of the main drainage at a location called “Hallis Grade.”

Humidity had dropped to 5 percent and the heavy chaparral and manzanita were perilously dry.

Engine Co. 57 (stationed in San Jacinto/Idyllwild) along with four other engines were directed to the mountain area of Gorgonio View Road and Wonderview Road to “triage houses.”

The four engines encountered people fleeing in vehicles down the highway which added to the chaos. Engine personnel reported the road was obstructed with numerous civilian vehicles, motor homes, horses, and livestock. Due to the traffic congestion, the four fire engines became separated and Engines 52 and 57 arrived at the staging area first.

Engines 52 and 57, followed orders and set up for structure protection. Fire, heat and smoke conditions continued to worsen. With increasing wind, tinder dry fuel, the fire began to intensify below quickly advancing up the canyon walls.

Enveloped in the heat and smoke, the fire front advanced quickly and with intensity. After it passed, attempts to contact Engine 57 went unanswered.

At approximately 7:57 a.m., the heat and smoke somewhat diminished Enough for Engine 51 and 52 Captains to work their way into Engine 57’s location to discover the burn-over. Ultimately the 5 members of Engine 57 perished doing what firefighters do, “protecting lives and property.”

Like all firefighters who have sacrificed their lives for others, you are NOT forgotten…

After several days, the Esperanza Fire ultimately consumed approximately 41,173 acres and destroyed 34 residences and 20 outbuildings. The fire also forced the closure of Highway 243.

Remember this: We’re not out of the woods. It’s just begun. Santa Winds are now with us. It’s going to be a bad season. Very bad! Stay together, stay heads up at all times and prepare as if your life depends upon it, because it does…