“Guess you almost had to be there, thumbin’ through the pages of my life/Is there nothing more to see there, take another chance to get it right.” That’s Derrick Anderson, reflecting on the myriad twists and turns that led him to record his first solo album after more than 27 years in the music business.

A child of the ‘60s, Derrick grew up in Toledo, Ohio and gravitated toward music early on. He received his first acoustic guitar at age eight and had the requisite lessons. He played clarinet in school marching bands, and just as puberty hit, the Beatles blew his mind. Digging into their extensive oeuvre he had a musical epiphany. He received his first bass on his next birthday.

Derrick played in a couple of cover bands in high school. In partnership with his pals the Binkowski brothers, he formed The Living End. The group concentrated on ‘60s Psychedelia, spicing up their sets with a growing arsenal of original compositions. By now he had been exposed to, and seduced by, the sounds of Elvis Costello, Squeeze, the Who, the Kinks, Otis Redding, Burt Bacharach, and the Smithereens.

Hoping to make it in the music industry, Derrick relocated to Los Angeles in his late ‘20s. He immediately got studio work as a session player, but his true ambition was to make his mark with his own band. Hoping to find like-minded players, he placed an ad in the Recycler. Rather quickly, he connected with guitarist Will O’Brian, and multi-instrumentalist, Robbie Rist, (still best known as the child actor who played Cousin Oliver on the “Brady Bunch). First Brian Bawinkel and then Marc Joseph took turns behind the drum kit.

Tongues firmly in cheek, they called themselves the Andersons!, musical brothers from different mothers. The band recorded two well-received albums before Derrick was recruited to play bass in Dave Davies’ band. His stint with the legendary Kinks guitarist lasted a couple of years and not long after he began working with the Bangles as their touring bassist. That relationship has lasted eight years.

Although he made a living as an in-demand session musician, Derrick’s own musical ambitions never waned. He was stockpiling his own songs hoping for a chance to record them. Getting by with a little help from some friends he has just released his first solo album, A World Of My Own 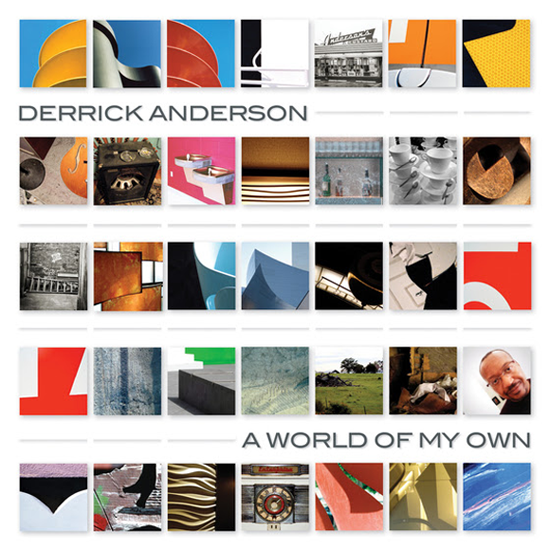 The opening track, “Send Me Down A Sign” sets the tone for the whole record. Jangly guitar and thrumming bass lines connect with a pummeling back-beat. The irresistible melody walks a fine line between Power Pop energy and Bubblegum crunch. Derrick’s boyish tenor has an aching purity as he scans the universe for an indication that he’s on the right path; “In the absence of pretention keep myself completely open wide/For some divine intervention whether it be real or just implied.”

Derrick seems to have distilled his myriad influences and created something wholly his own. All of the songs here channel a ‘60s sound that is by turns, swingin’, sylvan and soulful. Both “You Don’t Have To Hurt No More” and “My Prediction” fold gentle philosophies into slightly shagadelic arrangements.

On the former, shang-a-lang guitar licks crest over a Stax-Volt inspired horn section, churchy keys and a tambourine shake. His voice assumes an authoritative grit as he offers some pithy life lessons; “The day begins, you make amends with yourself, let it be known that there’s no one to blame (no blame)/And when you finally get it, you’ll never once regret it, you crash you burn, you live you learn to shrug off the pain. His wisdom is underscored by a kaleidoscopic guitar solo.

Conversely, “My Prediction” is a Moog-y, mid-tempo charmer, dominated by whooshing keys, chiming guitars and brushed percussion. The lyrics provide some easygoing encouragement; “And this could be your lucky day, everything can go your way like I told you/If I stand true with my prediction, and if all things should come to pass, this could be your time to bask in the glow if I get through my prediction.”

The great thing about this record is that it balances balls-out rockers with more contemplative ballads; sometimes placing them back-to-back.  Lush to the point of fecundity, “Something New” wraps baroque banjo notes around a measured, almost pastoral arrangement. A stutter-step rhythm is accented by swirly acoustic and electric guitars and a wash of keys. The introspective lyrics are buoyed by the shimmery, sororal harmonies of Bangle-bandmates Susanna Hoffs, Vicki and Debbi Peterson. A fluttery electric piano/banjo coda to close out the song.

Derrick immediately flips the script on the next cut, “Phyllis & Sharon.” A slab of Psychedelic Garage Rock, it blasts out of the speakers, pounding out a triple time tattoo, vrooming bass lines and souped-up guitars that buzz and yowl. The lyrics bemoan the end of an era that was equal parts innocent and decadent; “It’s been a long time and things have truly changed, nobody’s beating back their pain through sex and mounds of pure cocaine/Nobody’s trying to break some ground, Phyllis & Sharon had their sound they made their marks, they’ll be around.”

“A Mother’s Love” is the album’s most winsome track. A protean slice of Sunshine Pop, it blends boomerang bass lines, a ricochet rhythm and chiming guitar chords that seem to be “getting better all the time.” The (autobiographical) lyrics pay homage to a maternal instinct that is both tender and tough; “She’ll always try her best to catch your fall, and if your life’s a mess she’ll steer you right the back way.” Kicking the track into interstellar overdrive are the effortlessly beatific harmonies provided by Cowsill siblings, Bob, John and Susan. (Begging the question, when will the family, true inspiration for the Partridge Family, make a new record).

Bookending this jaunty paean, is the two-pronged attack of “Checking Out” and “Stop Messin’ Around.” On “Checking…” fuzzy guitars ride roughshod over a pile-driving beat and marauding bass fills.  Derrick’s blistering vocals match the hairpin curves of the guitar break as he insists “you better love somebody.”

Other interesting tracks include the bucolic “Happiness,” the candy-coated kiss-off of “When I Was Your Man” and yearning “Waiting For You.” The ambitious melody and arrangement of “Spring” cross-pollinates CSN, ELP and XTC. Languid, gauzy and graceful, the lyrics offer this seasonal metaphor for life; “And you know when the snow starts to melt away, everything grows again anyway/And the blows that we suffer through day to day, won’t keep us down, we’ll still be around.”

The album closes with a well-chosen cover, the Beatles’ “Norwegian Wood.”  Jettisoning the ambiguity and sitars, this version is pared down to guitar, bass and drums. The result is less Fab Four and more Power Trio, echoing the spontaneous combustion of the Jimi Hendrix Experience and Cream.

World Of My Own was produced by Steve Refling and Derrick Anderson. A veritable who’s who of Los Angeles musicians added their talents to this project, including Jim Lapesa, Dennis Taylor, Bernard Yin, Mike Randle, Joe Normal, and Jon Levy on guitar, Ray McDonald and Perry Ostrin on drums. Nelson Bragg played percussion, Greg Hifman on keys and backing vocals were handled by Timmy Bryson and Robbie Scharf.

A World Of My Own is clearly a labor of love, excellent from start to finish. Derrick Anderson has created a masterpiece. It’s the album you’ve been waiting for, you just didn’t know it. You will probably wear it out. Better buy two copies.