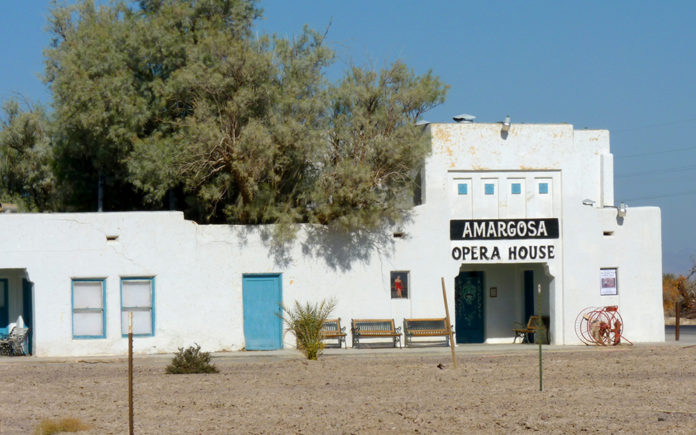 One of the Mojave Desert’s greatest cultural treasures is Marta Becket and her Amargosa Opera House in the “town” of Death Valley Junction.  An artist and performer from New York, Becket chanced upon an old mining company auditorium near Death Valley when on tour in 1967, and she transformed the dusty hall with its leaky roof into an internationally beloved cultural center.

Becket was an inspiring (and inspired) artistic force in the desert up until her death almost a year ago.  Originally performing in the auditorium, sometimes to no audience at all, she made the decision to transform the hall into a Renaissance opera house, replete with king and queen, courtiers, church hierarchy, and the high society of the time all caught in the act of attending the opera.  It took her four years to paint the walls, with another two years to complete the ceiling.  It is a magical creation that has to be seen to be appreciated. 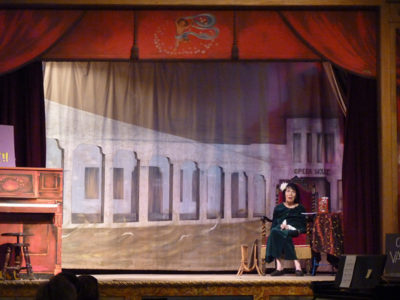 The Amargosa Opera House saw Becket perform regularly from 1967 until 2012, followed by sporadic performances.  Becket, who had turned ownership of the entire town of Death Valley Junction to a non-profit organization, did not have an easy time during her later years.  The town had a hotel and cafe in addition to the opera house, as well as a herd of wild mustangs that regularly called for treats from Becket.

Being elderly and the town’s lone resident, she was preyed upon by grifters and opportunists who took advantage of her isolation to bilk her organization of funds, while squatters moved into the hotel, and Becket allegedly became the victim of elder abuse.  Finally, the organization’s board rallied and order was restored to Death Valley Junction, but the damage had been done – at nearly the same date that Becket died, a letter arrived from the state of California informing the organization their charitable status was going to be terminated for lack of payment of registration fees and filing of required paperwork.

Luckily, the Board of Directors for Amargosa Opera House, led by Fred Conboy, brought the state paperwork up to date and paid the fees and fines owed to bring operations current.  To celebrate the 50th anniversary of Marta’s first performance at the Amargosa Opera House on February 10, 1968, there is a special celebration planned for February 10 in Death Valley Junction. 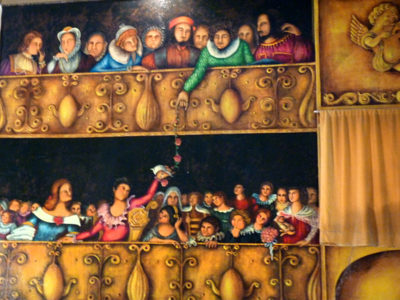 “There is something so special and magical about performing on the stage at the Amargosa Opera House,” Scheller said. She performed at the opera house for a time while Becket was recuperating from hip surgery and a broken collar bone.  “The light is unlike any other and seeing the wonderful walls again is truly a blessing.  I was so fortunate to have Marta as a roommate for a short time while she was staying in the hotel and during the middle of the night we would whisper softly about her dancing and painting days.

“As the caregivers took more control of Marta I was fortunate to sleep in the Opera House when I performed. I felt so safe there closing and locking the doors behind me and staring at the glorious ceiling,” Scheller continued.  “Right after each show I saw Marta to say good night and before each show got her blessing.”

Another special moment in the 50th anniversary program will be Red Skelton’s widow, Lothian Skelton’s remembrances and tribute to Marta Becket. 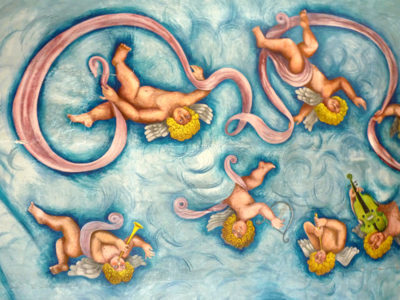 “Marta was such a visionary, so determined with dauntless effort and sacrifice, so prolific and multi-talented as well as extraordinarily talented and inspired to create an opera house in a long deserted historic ghost town … little by little … step by step,” Skelton noted.  “The vision from mounds of dust and devastation she saw the rebirth of a beautiful opera house where she could dance and sing, compose and write to her heart’s content, creating a renaissance of centuries past. The humor and pathos was, and is, so amazing, taking her audiences into a world beyond their imagination as well as writing scenarios based on the local characters who had never met the likes of such an eccentric visionary artist.”

Skelton said she and her husband first met Becket as the result of a note, and an invitation to meet her at “Becket Junction.”

“We just could not believe our eyes and ears,” Skelton continued.  “This creative genius, elegant ballerina, wild animal care-giver and loving human being just captivated our hearts. We loved Marta …She was elegance in sight and sound personified.” 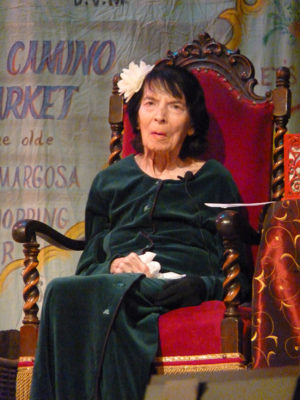 For those who knew Becket, or who have been captivated by the magic of her creation, this will be an event to cherish.  For those who never met Becket or enjoyed a performance in the legendary Amargosa Opera House, this will be an extraordinary opportunity to spend a night surrounded by the people and performers who loved her, and to experience for yourself the magic Becket created.  It is guaranteed to be an inspiring evening in a 16th century opera house, in a one-woman town, in the middle of nowhere.

“I feel that Marta is just next door taking a nap and that she is still with us,” Scheller noted, inspired herself by her time with Becket in Death Valley Junction.  “Her presence is very strong and she reminds me to never take anything for granted, keep painting, dancing and writing.”

Aina Balgalvis – Marta Becket: Her Life and Art in photographs