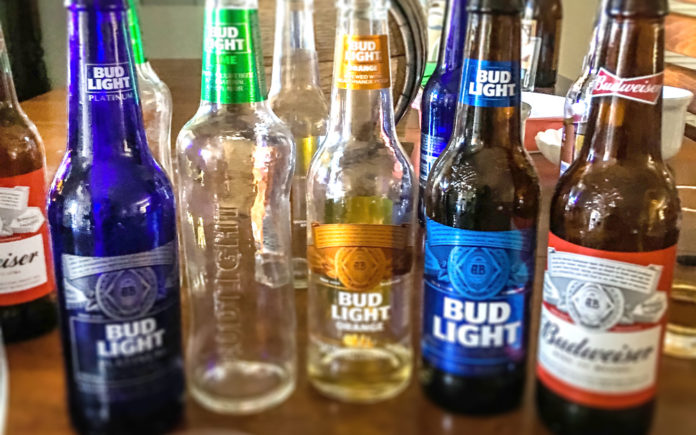 When Bud Light Orange hit the shelves earlier this month to the anticipation of no one, I knew that reviewing this dumpster-fire of a beer was going to be my journalistic duty.

I also knew that there was no way I was going to sit in my living room and drink the liquid equivalent of a Nickelback album by myself, so I recruited five of the desert’s thirstiest musicians to come over and share in the mediocrity with me. 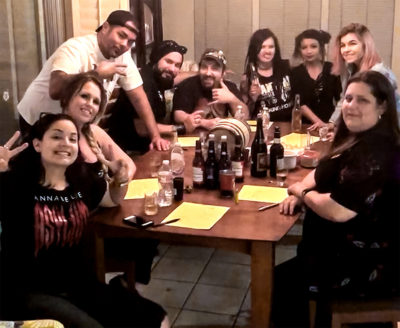 Bobby Taffolla of Perishment, Nick Hales of Sleazy Cortez, Desiree McCaslin of When Tides Turn, Serene Tahtinen of After Lashes/Ormus, and Andrea Taboada of Sunday Funeral all answered the call.

Friends Jacqueline Bonine, Courtney Ortiz, and Jenni Varela also participated, making sure that this was the first beer drinking party in the history of man that wasn’t a total sausage-fest.

I decided that while I had this Motley Crew at my disposal, we were gonna find out where Bud Orange stacks against the rest of Anheuser Busch’s portfolio. I had all the participants rate each beer from 1/5 stars, and give me their thoughts on each.

The crew did not disappoint.

This shootout occurred on 4/20, so it’s possible that more than Budweiser was being ingested that night, just sayin’.

Rating an awful average of 1.7/5, this beer was the pariah of the bunch. “Smells like Pine-sol, tastes like some Fanta bullshit,” says Serene.

“What the fuck, I am not finishing this,” states Jacqueline flatly after a sip, “it’s worse than a drunken one-night stand.”

Nick’s slightly more enthusiastic about Bud Orange, saying “I drank it and my stomach shouted ‘NOO’ as it was going down. You get fucked up tho, so that’s cool.”

I reviewed the king of beers in one of my first article’s, but the desert’s musicians were decidedly less thrilled with it, giving it an average of only 2/5 stars.

Bobby gives it a slight endorsement, calling it “a solid go-to,” but Serene is less enthused. “Gives me gut-rot,” she says flatly, “I’ll drink it if I’m desperate.” Jacqueline shrugs, “This tastes like it has more carbs than I’m allowed all day.”

This one divided the panel, with Platinum getting equal parts love and hate for an average of 2.5/5 stars.

“The blue bottle lets me pretend it’s fancy like wine,” says Courtney as she peers at her glass.

“Gross, like a Burzum record,” nods Bobby cryptically (It’s worth noting Bobby decided to forego the star ranking, and instead rank the beers according to his favorite underground albums).

“Thicc,” pontificates Jenni, “Feels like a regular beer and not a light.”

Desiree was less kind, in fact she looked pissed that I made her drink this beer. “I’d rather lick my dog’s ass than drink this again.” she says matter of factly.

The original Bud Light tied with Bud Light Platinum in terms of drinkability, with its 2.5/5 rating being exactly what you’d expect from the old standby.

“Cold and refreshing. Like an Immortal record,” Bobby ponders thoughtfully.

Serene sips on it and chimes in, “Sparking; it works if yo thirsty. Must drink COLD.”

Jacqueline says “My high school favorite. I stopped paying homeless people to buy it for me once I grew out of it.”

The unexpected winner of the evening! Gaining 2.8/5 stars for an almost-decent rating, it’s citrusy and candy-like favor made it the least hated amongst the panelists.

Bobby was less than enthused, giving it a thumbs-down while declaring “Synthetic. I give this one ‘Anvil record.’”

“Tastes fake,” mutters Nick while he chugs, “I have a hangover already and I’m still drinking it.”

So, a panel of three dudes and six chicks declared Bud Light Orange to be “Cheeto colored pee” (their words, not mine), while agreeing that Bud Light Lime was decidedly less awful than everything else Anheuser Busch puts out.

Bud Orange is only around for a limited time, so try it for yourself before it’s gone, and see how your own tastes rank it.