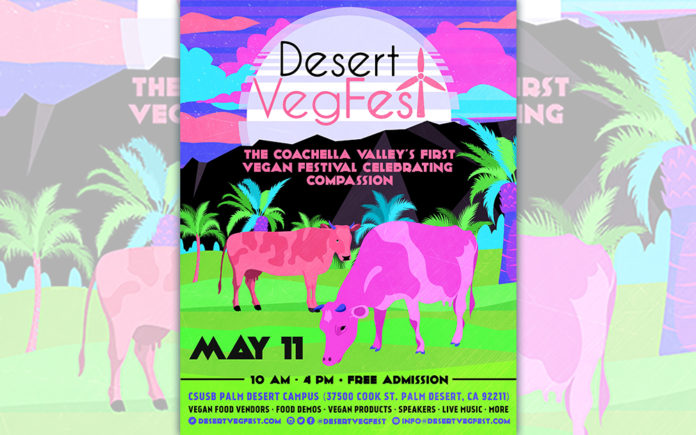 Calling all vegans, vegetarians, healthy eaters or those of us who just wish we could do better! Desert Veg Fest is the first event of its kind in the Coachella Valley and its creator and CSUSB student, Bryan Lopez is hoping to set a precedent for many more events like this in the future. Whether you are a hardcore vegan or are simply curious as to what it’s all about, there seems to be a lot in store for attendees.

CVW: Putting on an event like Desert Veg Fest is a pretty ambitious undertaking for such a young man. Tell us about what sparked that passion for you?

Lopez: “I think I was inspired because a lot of my friends don’t know much about veganism and I am the only one of my friends who is vegan and they give me a hard time saying things like, ‘What are you going to eat when we go out? Grass?’ They don’t believe that vegan food can be good so I wanted to prove them wrong. Besides, there are only 2 or 3 vegan restaurants in the valley so I really want to spread more awareness out here.”

CVW: And what about you personally? How did you come to the decision to live a vegan lifestyle?

Lopez: “I have been vegan since Nov, 2017. I was in Hollywood and there was something going on called the, “Cube of Truth” where activists with laptops and masks engaged with the public. They showed videos and images of slaughterhouses and to be honest, it really didn’t bother me. I just figured that is just reality. A girl approached me and we had a dialogue and although I still wasn’t necessarily convinced of anything, I figured that since I like a challenge, I would take trying out veganism on as a challenge. Then, 20 minutes later I ate a double bacon cheeseburger and chili-cheese fries. But 3 days later I committed and haven’t gone back since.”

CVW: What can attendees expect at the festival?

Lopez: “We will have around 55 vendors including 17 food vendors who will have a variety of menus from tacos, to pizza, vegan wings and more. There is something for everyone, really. There will be lectures and live music performances as well. It’s free and family friendly so everyone should come check it out.”