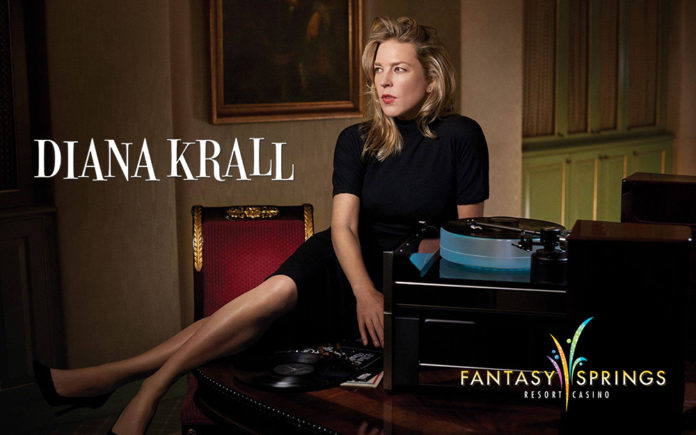 Krall has been making music since she was a toddler. Growing up in British Columbia, her dad, Jim was an accountant and Jazz enthusiast, her mom, Adella was a school teacher. Thanks to her dad, she absorbed the Great American Songbook, (music by composers like Irving Berlin, the Gershwins, Johnny Mercer and Cole Porter, to name a few). By age 15, she was playing Jazz piano in a local night spot and three years later she received a scholarship from Berklee School Of Music in Boston. Following matriculation, she headed to Los Angeles to begin her career in music.

By 1990, she relocated to New York and three years later, the Justin Time label issued her debut, Steppin’ Out. In 1996 she had switched to the venerable Jazz imprint Impulse, and it was her third album, All For You: A Dedication To Nat King Cole, that put her on the map. It peaked at #3 on the Billboard Jazz charts, setting the stage for her next two albums, 1997’s Love Scenes and 1999’s When I Look Into Your Eyes. The former hit #1 on the charts, the latter was the first Jazz album in 25 years to receive a Grammy nomination for Album Of The Year. It lost, but she did collect one for Best Jazz Vocal.

The 21st century brought more success, with her Look Of Love album and Live In Paris. On a personal note, 2002 brought heartache and happiness. Her mother lost her battle with Multiple Myeloma, and mentors like Rosemary Clooney and Ray Brown also passed away. But she met Elvis Costello, part of Punk Rock’s inaugural Class Of ’77. Born Declan McManus, his dad Ross was a Jazz trumpeter and vocalist for Big Band orchestras. Elvis’ music hopscotched genres and by then, he’d recorded albums devoted to Country, Soul, Classical music and Jazz. The pair were perfectly matched, and they married the following year at Elton John’s English estate.

Diana’s next album explored new territories, veering away from her usual mix of Jazz standards. Instead, 2004’s The Girl In The Other Room embraced contemporary songwriters like Tom Waits, Joni Mitchell, Mose Allison and even her husband. She and Elvis also co-wrote several songs for the album. Again, she has a #1 record. But she and Elvis’ greatest collaboration came two years later with the arrival of their sons, Dexter and Frank.

In the ensuing years, she has averaged a new album every three years. From This Moment Now, was released in 2006, followed by the Bossa Nova flavored Quiet Nights in 2009. In 2012, she partnered with producer T-Bone Burnett for Glad Rag Doll, which concentrated on pre-World War II Jazz songs culled from her dad’s voluminous record Collection. Three years later, she took a sharp detour, focusing on AM Pop/Rock hits from the late ‘60s and early ‘70s. 2017 saw the release of her 13th studio effort, Turn Up The Quiet.

A return to her Beloved Great American Songbook, it also reunited her with mentor Tommy Li Puma (sadly, he passed away not long after recording was completed). The result was an impossibly elegant record that truly swings. Her newest record, Our Love Is Here To Stay, arrived in 2018; a collaboration with the legendary Tony Bennett, it featured songs from George and Ira Gershwin. Naturally it went to #1 on the Jazz charts.

Much like Nina Simone, Aretha Franklin, Ray Charles and Norah Jones, Diana Krall is at her most appealing when she accompanies herself on piano. Her earthy playing perfectly complements her recherche contralto vocals. She has been Grammy nominated 13 times, winning five awards.