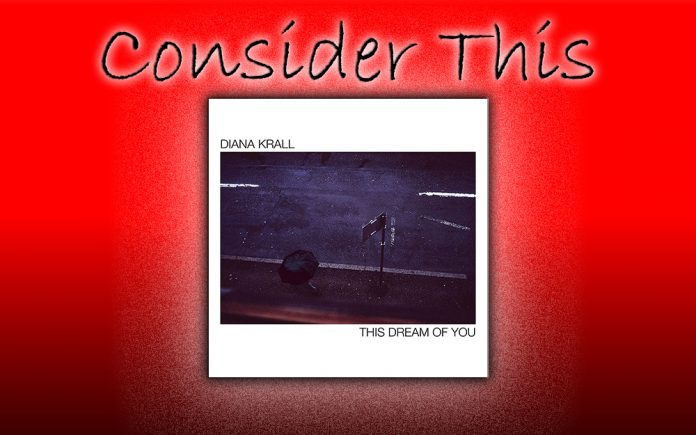 Diana Krall has had many mentors in her life, beginning with her dad Jim (a music-loving accountant who introduced her to Jazz), to legendary musicians like Rosemary Clooney and Ray Brown. But it was the late Tommy LiPuma, who made the most lasting impression. Her new album, This Dream Is You, is a tribute to the celebrated producer and their 25-year working partnership and friendship.

Back in the mid ‘90s, it felt as though Diana Krall burst on the Jazz scene out of nowhere. In reality, she had been working her way toward that moment since she was a kid.

Encouraged by her Jazz aficionado dad, Jim and her school teacher mom, Adella, the Nanaimo, British Columbia native began playing piano at age four, She was gigging professionally by high school. Diana received a scholarship to the prestigious Berklee College Of Music in Boston, and once she completed her studies she decided to make music her profession. Following stints in Los Angeles and Toronto, she moved to New York City.

Three years later, her debut, Stepping Out, was released on the boutique label, Justin Time. Critics and Jazz connoisseurs took notice. The album was a sharp collection of standards from composers like Rodgers & Hart, Harold Arlen and Duke Ellington, but the focus was on Diana’s elegant piano stylings and her smoky contralto vocals.

Her sophomore effort, Only Trust Your Heart, arrived two years later from GRP Records, under the aegis of Tommy LiPuma. An industry giant, beginning in the early ‘60s, he had already worked his way up the ladder at labels like Liberty, Blue Thumb, Columbia, A&M/Horizon Warner Brothers and Elektra . He landed at GRP/Impulse/Verve in 1994. Having worked with everyone from Miles Davis, Barbra Streisand, Hugh Masakela, Antonio Carlos Jobim, and George Benson to Dr. John and Little Willie John, he and Diana immediately clicked.

After Tommy produced Only… he reteamed with Diana for the album that put her on the map. All For You: Dedicated To The Nat King Cole Trio, bypassed the usual Nat King Cole hits, instead concentrating on deep cuts like “Frim Fram Sauce, “I’m Through With Love” and “Hit That Jive Jack.” The album climbed to #3 on the Jazz charts, going Gold (500,00 sold) in Canada and America.

From then on, it felt like Diana could do no wrong. Her 1997 album, Love Scenes hit #1 on the Jazz charts and was certified platinum. Two years later, When I Look Into Your Eyes was the first Jazz record to receive a Grammy nomination for Album Of The Year. Even though she lost out to Santana (ick), she still went home with the award for Best Jazz Vocal.

The next decade was a see-saw of professional triumphs along with personal highs and lows. Albums like The Look Of Love and Live In Paris continued her creative winning streak. Sadly, 2002 saw the passing of her mom, Ray Brown and Rosemary Clooney, but it was also the year she met Elvis Costello.

The British singer-songwriter, born Declan McManus, was part of the inaugural Class Of Punk back in 1977. But his dad was a Jazz trumpeter and Big Band vocalist who exposed his son to myriad musical styles. Even though his first three albums redefined the Punk/New Wave paradigm, he also recorded albums devoted to Country, Soul, Jazz and Classical. It felt like a perfect match. The couple were wed at Elton John’s English estate in 2003.

For her 2004 effort, The Girl In The Other Room, Diana took an intriguing detour. Almost a joint collaboration between the newlyweds, it eschewed her usual mix of standards. Instead, it featured songs she and Elvis co-wrote as well as her tart interpretations of songs by more contemporary artists like Mose Allison, Joni Mitchell and Tom Waits. It may have confounded longtime fans, but it still debuted on the charts at #1. In 2006, Diana and Elvis welcomed the arrival of their twin sons, Dexter and Frank.

In the ensuing years, Diana has managed to balance career and family life, releasing a new album every three years. First up was From This Moment On, the Bossa Nova-flavored Quiet Nights showed up in 2009. She tapped acclaimed producer T-Bone Burnett (Elvis’ best pal) for 2012’s Glad Rag Doll which included a lot of her dad’s favorite Jazz songs from the ‘20s and ‘30s.

In 2015, she switched gears again, for Wallflower. This time, she enlisted fellow Canadian David Foster to produce a clutch of Pop Rock AM radio favorites from the late ‘60s and early ‘70s. The set included songs from the Mamas And The Papas, Eagles, Elton John and 10cc.

In 2017, she reunited with Tommy LiPuma for their seventh collaboration, Turn Up The Quiet, is an impossibly elegant collection of standards that really swings. Sadly, Tommy passed away not long after the album was completed. A year later, she recorded a duets album with Tony Bennett. Our Love Is Here To Stay concentrated exclusively on classic songs from the George and Ira Gershwin canon. Naturally, it debuted at #1 on the Jazz charts.

All told, Diana and Tommy recorded about 40 songs during the Turn Up The Quiet sessions. While promoting the album, she hinted there could actually be a second and possibly third volume culled from those recordings. This Dream Of You, her 15th album is that second volume.

The first three songs, set the tone for the album. “But Beautiful,” the Jimmy Van Heusen/Johnny Burke ballad has been performed by everyone from Dorothy Lamour to Bob Dylan, but the definitive version belongs to Billie Holiday. Diana leans closest to Billie’s phrasing and Ray Ellis’ arrangement. Over a fluttery string section, piquant guitar, plaintive piano, a walking bass line and brushed drums, her vocals shapeshift from tremulous and intimate to bold and distant. She quietly caresses lyrics that explicate the vagaries of romance; “Love is tearful or it’s gay, it’s a problem or it’s play, it’s a heartache either way, but beautiful.” Rippling guitar notes are enveloped by soaring strings and plucking bass lines on the break, as perfect as that’s sounds, it’s incomplete without Diana’s intime vocals, which tenderly close the song.

The piano intro to “That’s All” sketches out the melody before sly bass lines, willowy guitar and hushed percussion are folded into the mix. Diana’s rich contralto is equal parts shy and seductive, as though she’s letting us in on a secret when she confesses; “I can only give you love that lasts forever, and promise to be near each time you call/And the only heart I own, for you and you alone, that’s all, that’s all.” As drums and bass thread through on the break, piano and guitar execute a graceful pas de deux that is by turns playful, crafty and sleek. Diana, in particular unfurls a crisp series of chord changes that echo the genius of the late pianist Vince Guaraldi.

Meanwhile, “Autumn In New York,” which was originally written in the early ‘30s, receives a lush arrangement. Wistful guitar licks are matched by moody upright bass, warm piano and an opulent string section. The instrumental cornucopia is tempered by Diana’s diffident mien. Here, she quietly captures the terror and magnificence of the big city; “It’s autumn in New York that brings the promise of new love, autumn in New York is often mingled with pain/Dreamers with empty hands may sigh for exotic lands, it’s autumn in New York, it’s good to live it again.”

To paraphrase the Gershwin boys, what’s wonderful what’s marvelous about Diana Krall is that she is equally at home backed by a 30-piece orchestra, an ornate string section or a lone piano. On both “More Than You Know” and “Don’t Smoke In Bed,” Alan Broadbent takes over piano duties, allowing her to concentrate exclusively on vocals. The results are simply swell.

“More..” opens with an expansive piano prelude, and features the (rarely recorded) original first couple verses; “Whether you are here or yonder, whether you are false or true, whether you remain or wander, I’m growing fonder of you/Even though your friends forsake you, even though you don’t succeed, wouldn’t I be glad to take you, give you the break that you need,” that most singers skip. A classic torch song, she imbues each note with heartache and longing.

“Don’t Smoke…” leans in on the Saloon tradition that was practically invented by Frank Sinatra. Brittle piano underscores lyrics that toggle between apathy and wifely concern. Here, Diana slips out under the cover of darkness, leaving a note and a discarded wedding ring; “I’m packing you in like I said…” Still, she can’t help but worry; when she warns; “don’t smoke in bed.”

On both “Almost Like Being In Love” and “Just You, Just Me” Diana completely cuts loose. The former opens with a jaunty piano refrain before skittery drums, thumping bass and filigreed guitar kicks in, locking into a finger-popping groove. Although the mood seems measured, the instrumentation simply swings. On the break everyone stretches out, coloring outside the lines without appearing flashy or ostentatious.

The latter opens with a stunning salvo of drums that clatter and careen until bass, guitar, piano and fiddle jump in. Diana’s manner is playful and frisky as she impishly suggests they find a secluded spot to “cuddle and woo.” As the beat accelerates, pizzicato fiddle collides with rapid-fire arpeggios from Diana’s piano, recalling the electrifying Gypsy Jazz of Stephane Grappelli and Djanjo Reinhardt.

The album’s highlight is the title track, written by Bob Dylan, this relax-fit waltz was originally found on his 2009 album, “Together Through Life.” Diana’s version slightly sands off the song’s rougher edges, but retains its rusticity. Quiescent piano connects with tranquil bass, subdued drums, mournful fiddle, Spanish-flavored guitar and melancholy accordion colors. The courtly arrangement partners with lonesome lyrics that seem to offer a tender encomium to Tommy LiPuma; “From a cheerless room, in a curtain gloom, I saw a star from Heaven fall, I turned and looked again but it was gone/All I have and all I know is this dream of you, which keeps me living on.”

Other interesting tracks include the winsome “There’s No You.” Diana completely recalibrates “I Wished On The Moon” turning the expansive ballad into a joyful Jazz-jump, buoyed by commanding bass lines, an infectious downbeat and some frolicsome piano. The obverse is true with the typically cheery “How Deep Is The Ocean,” which scales back to a moody tone poem.

The album closes with a sunny take on “Singing In The Rain.” Piano, vocals and bass are quickly bookended by shimmery guitar and a syncopated beat. Here, her phrasing is slow as molasses, yet she still manages to reveal the same joie de vivre as Gene Kelly as he romped through puddles, in the timeless MGM musical. Diana counted the film’s director, the late Stanley Donen as a friend, so this feels like a bit of an homage.

This Dream Of You is a rich and nuanced tribute to Diana’s mentor and friend, Tommy LiPuma; an effortless coda to a friendship that lasted a quarter of a century.