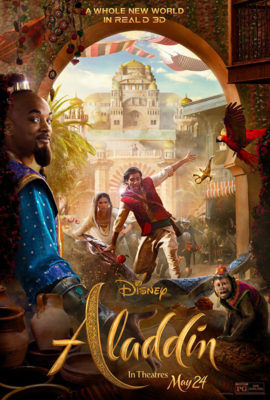 Its more than ironic that the release of Disney’s live action Aladdin coincides with a military“intervention”in the region, as was the release of the previous iteration, though in that one, Disney changed the setting to a fictional city to avoid any connection with the Baghdad of Saddam.

While the story of a pauper-turned-prince has long appeared in Western editions versions of Nights, it was a later addition that changes were made. The first Aladdin has been all but forgotten, even in its original context, it was far racier than the one we most know.

With roots in Iran and India, the original “Aladdin” derived from the Middle Persian text Hezar Afsan (A Thousand Tales), a compendium of stories from the Islamic Golden Age of the 14th century narrated nightly by the Persian noblewoman Scheherazade

The legend goes that Scheherazade, married to brutal king Shahryar, saved her life for a thousand and one days by telling her husband a story every night always ending just before the conclusion so that the curious king would not kill her, eventually winning his love and trust.

There have been numerous film adaptations since 1905, also a long life on the British stage.  Alexander Korda’s eautiful 1940’s Technicolor remake of the 1924 silent version is basically the source for both Disney adaptations that transformed Aladdin into a kleptomaniac and reinvented Abu and Jafar. 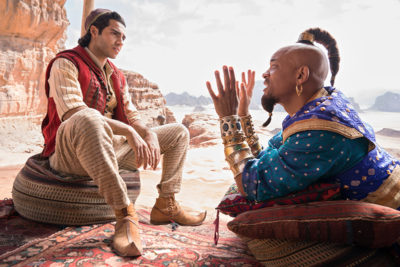 The new Aladdin retells its  ancient fable with a full palate and artful craftsmanship, but make no mistake, it never approaches the dazzling splendor of Disney’s original about a street rat who frees a genie from a lamp, granting all of his wishes and transforming himself into a charming prince so he can marry a beautiful princess. But soon, an evil sorcerer becomes hell-bent on securing the lamp for his own sinister purposes.

For adults, I suggest you search for an older print version of adventurer and Orientalist Richard Francis Burton’s translation of “Aladdin of the Beautiful Moles”—in his late-19th-century version of Nights.  It’s anything but an innocent fairy tale. 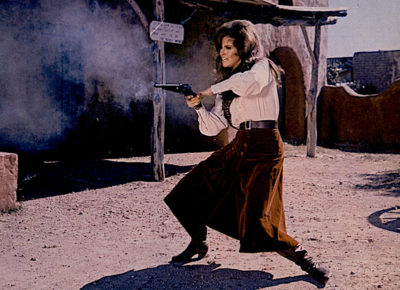 A bountiful cast comprised of Hollywood legends and a deep bench of character actor favorites highlights this wooly western about an outlaw gang racing to outride the law and a brace of Mexican banditos in the Southwestern badlands.  From Andrew McLaglen, the veteran director of The Wild Geese and The Devil’s Brigade comes a gorgeous adventure rich in wry humor and thunderous action making its North American Blu-ray debut, complete with a terrific Jerry Goldsmith score available on an isolated track.  Twilight Time Movies. 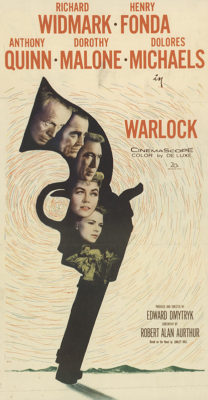 A great cast and thoughtful screenplay embue this adult western about justice and mob rule with unexpected relevance.

The town of Warlock is plagued by a gang of thugs, leading the inhabitants to hire Clay Blaisdell, a famous gunman, to act as marshal. When Blaisdell appears, his friend Tom Morgan, a club-footed gambler who is unusually protective of Blaisdell’s life and reputation, accompanies him. However, Johnny Gannon, one of the thugs who has reformed, volunteers to accept the post of official deputy sheriff in rivalry to Blaisdell.  And then a woman arrives in town accusing Blaisdell and Morgan of having murdered her fiancé. The stage is set for a complex set of moral and personal conflicts. 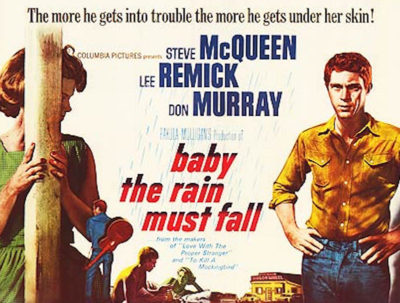 The To Kill a Mockingbird team of producer Alan J. Pakula, director Robert Mulligan, screenwriter Horton Foote and composer Elmer Bernstein reunite for the starkly dramatic tale of newly paroled firebrand (Steve McQueen), a would-be rockabilly musician torn asunder by his abusive family past, striving to mend his own self-destructive ways and his fraught relationship with his wife (Lee Remick) and child.  When he proves incapable of supporting his family, McQueen’s violent nature erupts once more, with catastrophic results.

A close to the bone project for Texas native Horton Foote and his hell-for-leather star McQueen benefits from rural location lensing and a scorching title tune by Elmer Bernstein and Ernie Shelton.  The evocative burnished cinematography is by the great Ernest Laszlo.  For more info: screenarchives.com. 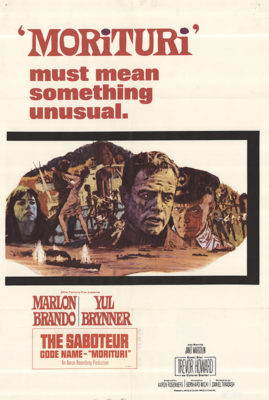 The action takes place on a blockade-running freighter traveling from Yokohama to Bordeaux with 7,000 tons of crude rubber, a vital war material; Brando plays wealthy German deserter living in India who is blackmailed by the British to impersonate an SS officer to help obtain the cargo, Brynner plays the ship’s captain who is ready to scuttle his own ship if threatened with capture.  Brando’s mission is to disable the scuttling charges so the captain cannot sink the ship if they are stopped by English warships.

Trevor Howard plays British officer Colonel Slater, and Wally Cox is the ship’s physician Dr. Ambach.  The lovely Janet Margolin plays Esther Levy, a concentration camp escapee.  Brynner’s Mueller rightfully suspects Brando’s Crain and denies him access to key areas of the vessel, and tension builds as Crain tries to carry out his mission, knowing that failure will mean certain death.  If WW II drama is a genre you enjoy, don’t miss this taut tale of brooding menace.  The Twilight Time edition is limited to only 3,000 units and when they’re gone, that’s it.