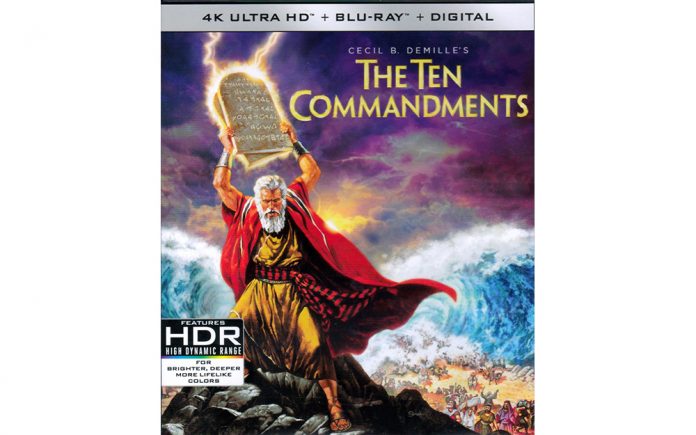 Just in time for Easter/Passover, director Cecil B. DeMille’s 1956 epic THE TEN COMMANDMENTS arrives in a spectacular 4K Ultra HD edition on its 65th anniversary.

DeMille directed the 1923 silent version that takes place in ancient Egypt as well as a contemporary moralistic plot set in the 20th century.

DeMille’s 1956 reboot brings to life the tale of Moses in all its mythic glory.  This beloved film has withstood the test of time. 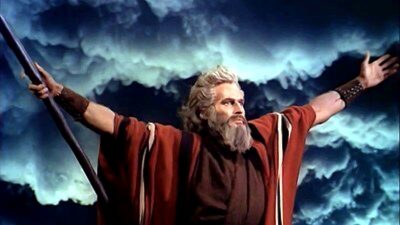 Beautifully restored in 2010, the film was scanned in 6K and those files were the basis for this brand-new Dolby Vision version, which shows off the full dazzling beauty of the original VistaVision negative.

In addition, many (150 plus) hours were spent doing new color work and cleanups on the scan.  The move to Dolby Vision insured further improvements on the look of the film: blacks have been enhanced and improvements were made to smooth out the noticeable special effects mattes to create the most vibrant and pristine image possible.

The 4K film presentation contains an introduction by DeMille, an intermission, an overture/exit music card, and an entr’acte card, along with a DTS-HD 5.1 lossless soundtrack. 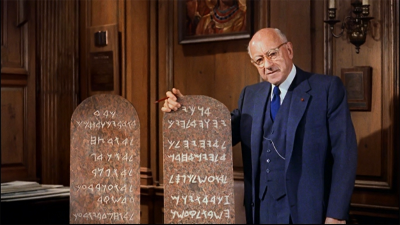 The 3-disc set includes a 4K Ultra HD disc, two Blu-ray discs, and access to a Digital copy of the film.There’s a fascinating commentary by Katherine Orrison, author of “Written in Stone: Making Cecil B. DeMille’s Epic The Ten Commandments”

For sheer pageantry and spectacle, few motion pictures can claim to equal the splendor of THE TEN COMMANDMENTS. DeMille’s last motion picture made Charlton Heston a superstar and remains an unprecedented achievement and perennial fan favorite. Filmed in Egypt and the Sinai with one of the biggest sets ever constructed for a motion picture, THE TEN COMMANDMENTS tells the story of the life of Moses (Heston). Once favored in the Pharaoh’s (Yul Brynner) household, Moses turned his back on a privileged life to lead his people to freedom.

A biblical scholar and theologian told me that even with the historical flaws and theological inaccuracies in the film, the movie is a timely reminder of the essential nature of one of the founding documents of the western world and is not so much a list of ‘thou shalt nots’ as it is a list of fundamental human rights (as in the right to not be lied to and to take one day a week off etc.).  And thus, the 10 commandments are rightly portrayed in the movie as a divine bill of rights and a catalyst for freedom movements and human liberation.

This sparkling edition is one for the digital home library.  Paramount.