About this time of year, all over the world, there are festivals honoring the dead. There is no astronomical significance to the date as formerly pagan but now “Christianized” holidays attest. Some scholars think that at the dim recesses beyond the borders of written history, even before the Celtic rituals and bonfires of Semhain, there remains a collective memory of a cataclysm attributed to the gods (or God): a catastrophe that generated widespread death that remains in our collective unconscious.

But whatever the cause, there’s no question the day is not just about fear, but more about remembering our deceased ancestors as a reminder of our fragile mortality. For me, the true spirit of All Hallow’s Eve is not about being afraid so much as facing one’s fears — and mocking those ancient fear-mongers that would deride, debase and denigrate our sacred humanity. Someone once said, “What we fear is what we most believe. Or we wouldn’t be afraid.”

So, in honor of this delicious season of fear, here’s a 24-hour horror film fest of perhaps lesser-known titles that you can show and share in your own home theater. Ater all, the dancing shadows on that screen are what it’s all about.

First off are two documentaries. One defines our need to feed and feel our fear. And the next, confronts real evil. What better way to set the mood? 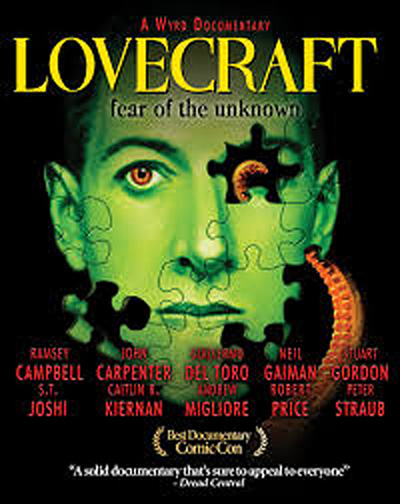 LOVECRAFT: FEAR OF THE UNKNOWN

I enjoyed this long-overdue tribute that revealed Lovecraft’s old-world mindset and rather strange, xenophobic, reclusive life. Film directors John Carpenter (HALLOWEEN and Guillermo Del Toro (HELLBOY) contribute thoughtful insights into Lovecraft’s moody style and original subject matter. And the influence on pop culture and movies in particular. Popular horror writers Neil Gaimen, Ramsey Campbell and Peter Straub offer informed and enthusiastic comments about Lovecraft’s world and influience on them. The documentary is made with great care and is a pleasure to experience. It sets the bar very high for similar works on other deserving writers. Great graphics and music set the eerie tone that no doubt would please Lovecraft himself. There’s extensive bonus material for the interviews and a gallery of Lovecraft inspired art. 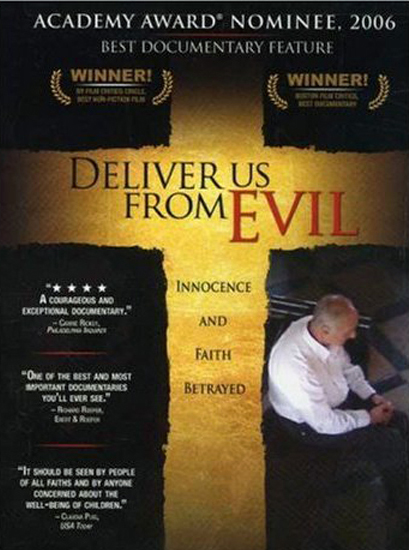 DELIVER US FROM EVIL

Confronting real evil is the subject of Amy Berg’s exceptional 2006 documentary. I am not yet jaded at the revelation of the 1,600 year-old cover-up of sexual abuse by the Catholic Church.

Specifically, the monster in the sharp focus of Berg’s lens is the “reverend” Father Oliver O’Grady. The victims and the families of the victims, speak out in blunt, horrific, heart-rending testimony. But what’s especially unsettling is the taped depositions of O’Grady’s superiors and the knowing cover-up of the monstrous evil perpetrated under the cloak or piety. What greater sin is there than the betrayal of a child? Innocence lost is forever. It is beyond belief to me that most of the guilty, including Father Mahoney of the L.A. archdiocese, are not behind bars. Being the punk of a lifer would be getting off easy. No pun intended. Evil in the name of God is destroying our global civilization.

Now that you’re reminded that there is real evil to fear, let’s safely go where “reel” fear dwells. For me and manhy others, some of the early vintage horror films seem more frightening than recent scare flicks. It’s even easier to suspend disbelief today because these odler films now seem like authentic historical documents! Some of them almost look like “found footage.” 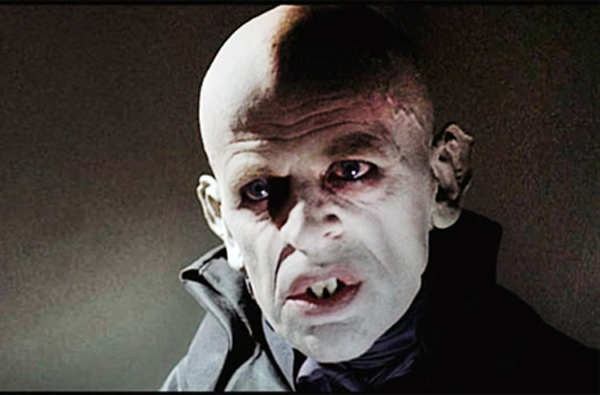 But a few copies of landmark and exquisite German expressionistic masterpiece escaped and were the inspiration for German writer-director Werner Herzog’s remake NOSFERATU: THE VAMPYRE (1979). Klaus Kinski’s pale makeup, pointed ears, long fingernails and mannered gestures will unnerve in this atmospheric, deliberately paced, fever-dream of a movie. Isabelle Adjani co-stars as the distraught wife of Bruno Ganz’s Jonathan Harker, who comes under the blood spell of Kinski’s magnificent creature. The music, mood and images will reverberate long after the movie ends. The DVD includes the German language version with English subtitles as well as a full-length, but slightly different English version and a most unusual bonus commentary by Herzog himself. 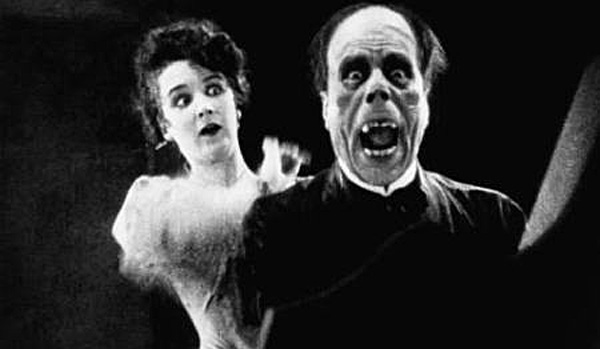 PHANTOM OF THE OPERA

With the famous line: “Feast your eyes, glut your soul on my accursed ugliness!” from Gaston Leroux’s mystery novel faithfully adapted by Universal Studios in 1925, Lon Chaney unmasks the pathetic, horrifying, iconic face of Erik, the mysterious mentor of the Paris opera. Two years earlier he had starred as Quasimodo in Universal’s HUNCHBACK OF NOTRE DAME. Chaney’s indelible portrait of both tortured men transcended cinema and entered modern culture as emblems of humanity’s damaged soul. Joining Chaney in PHANTOM was the beautiful young Mary Philbin as Christine Daae. The film was directed by journeyman Rupert Julian. Several versions of this great silent film exist on DVD, but look for the more recent Blu-ray edition with a choice of terrific scores. 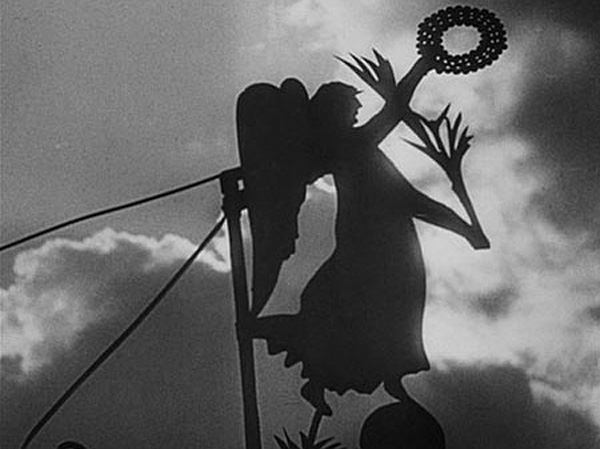 None other than Sir Alfred Hitchcock deemed Carl Theodor Dryer’s 1932 “Vampyr” the “only film worth watching twice!” The first sound film by one of the founding architects of cinema itself, delivers a palpable, sensual experience that,in my opinion,few films can match. Director Dryer is like a hypnotist whose film will put you in a waking dream that claws at the edges of the supernatural realm. This strangely layered film is about the journey of a man named Allan Gray who is drawn to a countryside inn by ghostly forces. Allan gray is played convincingly by “Julien West,” who in real life was the secretive Baron Nicolas de Gunzburg! At the inn, Gray becomes involved with the family that lives there and the ghosts and demons that also seem to be peripheral members of the family! But it’s Grays attraction to Giselle, the sexually charged virgin daughter, that seals his fate by forcing a confrontation with the ultimate vampyr – Death itself. Interestingly, Giselle is played by the “great, accursed Sybelle Schmitz,” whose real life (look it up, no room here) was as interesting as her screen personas.

The final moments of asphyxiation in the blasphemed bodies of the horrific bat-men have probably had more influence on horror cinema than any other. 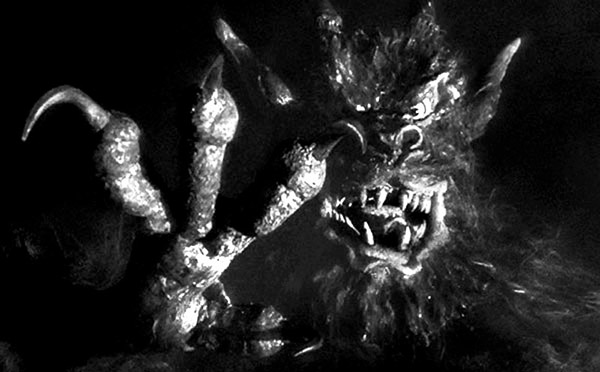 NIGHT OF THE DEMON

When a British colleague of rational, level-headed American psychologist Dana Andrews is brutally murdered, he of course denies it’s the work of the devil — until he becomes the next target of the demon! This spooky little UK gem from 1957 was cut to 82 minutes for American distribution. The DVD contains the full-length restored original edition as well as the truncated American release under the title CURSE OF THE DEMON. Psycholofgical horror is the most terrifying – especially when it’s no longer psychological. This adaptation of Dennis Wheatly’s novel “Casting the Runes” does not shay away from going all the way. It’s a cult fave, especially in Britian. 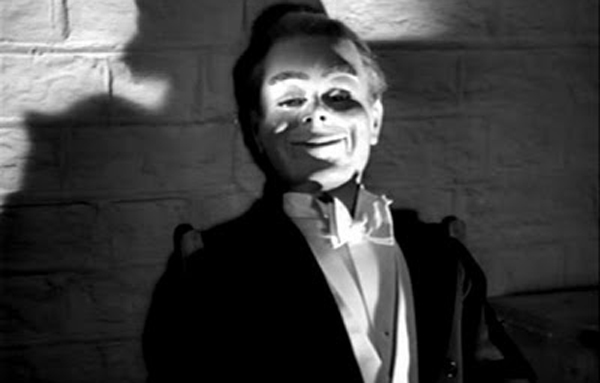 One of the all-time great scare anthologies is a collection of freaky supernatural stories told by strangers at a remote estate. The topper is the grandfather of all psychological horror films in which Sir Michael Redgrave’s renowned ventriloquist tells his tale of madness and murder when his dummy exhibits a mind of his own. A concept that has been stolen in later film productions, but never executed as well. The DVD of the uncut, restored UK version is coupled with the wonderfully macabre “QUEEN OF SPADES.” 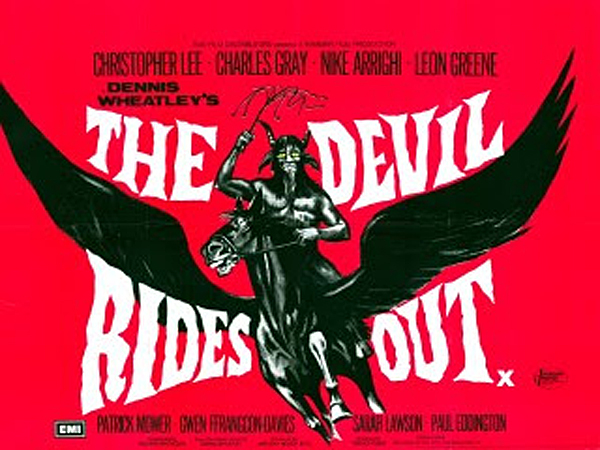 THE DEVIL RIDES OUT

Christopher Lee is Duc de Richleau who is concerned when a young friend is absent from their regular reunion. An investigation reveals the friend is trapped in a hypnotic-astrological cult led by a malevolent Satanist named Mocata (Charles Gray). In a desperate game of brave good and raw evil, Lee challenges Mocata with a powerful ritual that may or may not destroy his coven and free his friend. This is terrific 1968 Halloween movie has lost none of it’s disturbing power as it raises all kinds of theological questions. The beautiful DVD transfer features a great commentary with stars Christopher Lee and Sarah Lawson. 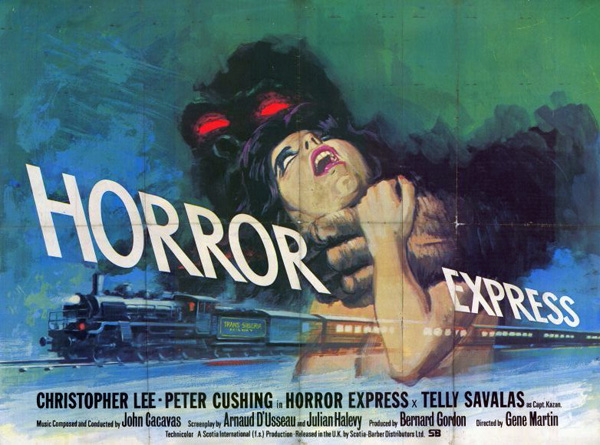 Was that a train whistle? Or. Something. Else!? Peter Cushing unearths a huge, frozen, man-like creature in China. It’s crated and put on a train for Europe where, surprise, it thaws out and breaks loose. Lucky for us, Cushing is reluctantly paired with rival scientist Christopher Lee to fight this diabolical creature hell bent on human destruction. It’s always great to see these two iconic actors together even in euro horror trash. This bizarred 1972 Spanish production is now a cult fave that has fallen into public domain but is also available in a nice, reasonably clean widescreen Blu-ray transfer. 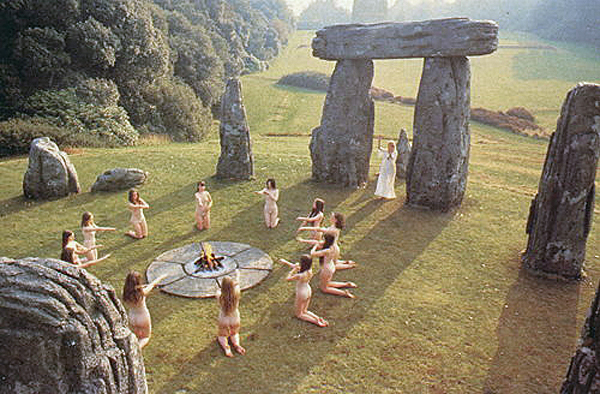 It’s been called the CITIZEN KANE of horror films. Edward Woodward is upstanding, decent Police Sergeant Neil Howie, an English outsider who is called to investigate the disappearance of a 12 year-old girl on Summerisle, just off the West coast of Scotland. Howie’s world is slowly turned upside down as he plunges ever deeper into the primitive, oh so pagan, nature worshipping community only to discover the missing girl is the bait and he is the prey. This wonderfully paranoid, occult thriller features Christopher Lee as Lord Summerisle and an au naturelle Britt Ekland. Directed by Robin Hardy from a screenplay by Anthony Schaffer. Is this 1993 classic cult film from the UK a warning of New Age beliefs? Is it pro-pagan or does it reinforce the sacrifice inherent in Christianity? What it may or may not mean is up to you. But be warned, it goes all the way with it’s premise and that is a rare thing indeed. (Don’t confuse this title with the inferior Nic Cage remake.)

It’s worth noting that some local churches offer “Harvest Festivals” in lieu of more disturbing Halloween parties for their youth, when in fact it was the pagan harvest rites that often included blood sacrifices! Hail irony. 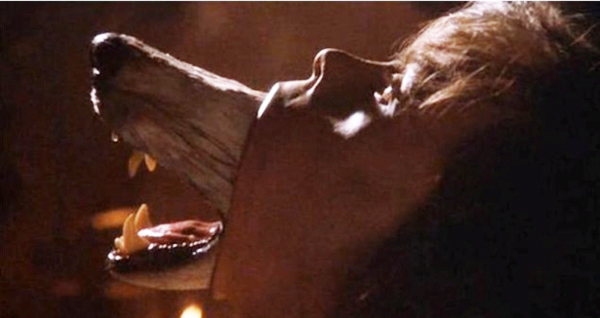 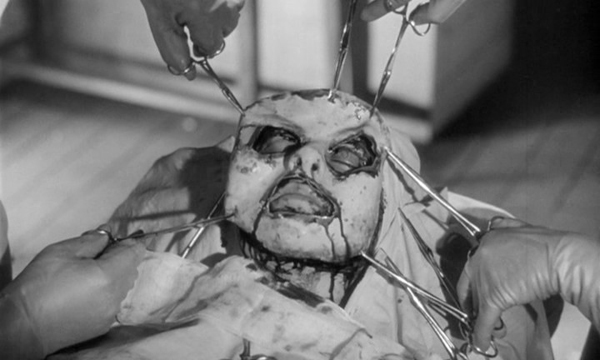 George Franju’sblack and white French classic (aka LES YEUX SANS VISAGE) has influenced numerous films. Secluded in the French countryside, a brilliant, obsessive doctor attempts a radical surgery that could restore his beloved daughter’s once-beautiful face, but at a horrifying price. Stunned audiences around the world were shocked at the bold, yet lyrical imagery. The Criterion disc also includes “BLOOD OF THE BEASTS,” Franju’s graphic but beautiful 1949 short documentary about Paris slaughterhouses. R, widescreen, 95 minutes) 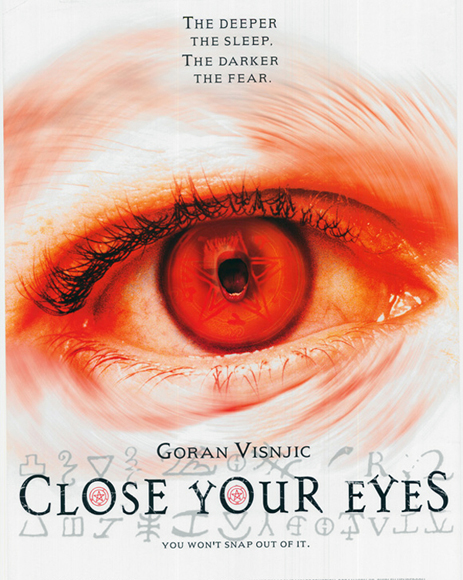 Fans of the “Da Vinci Code” and “Angels & Demons” will appreciate Nick Willing’s little 2002 chiller that centers on a London murder investigation that uncovers occult symbols, Rosicrucian alchemy and blasphemous heresies that unfold when a hypnotherapist (Goran Visnjic) tries to help a female cop (Shirley Henderson) stop smoking and is asked to hypnotize a mute child who was kidnapped but escaped from an unknown assailant. This precisely made film with careful composition and terrific performances builds tremendous tension that leads to an outrageous climax. I thought about this scary little film for days afterwards.

For maximum effect, try and see these films in the order presented.