October and November are a time for horror. Going back thousands of years, this has been a time to remember or celebrate the dead. It has also been a time to mock the demons and malevolent spirits. Some scholars suggest that mankind collectively, unconsciously, recalls a catastrophic incident at the edge of recorded history in which much of humanity was decimated. Some think it goes back to the Great Flood of Noah! Whatever the source, this is a great time to enjoy horror films and to safely feel the fear that lurks oh so close by.

For the last ten years, I have programmed in print and privately a weeklong “DO IT YOURSELF HORROR FILM FEST” that kicks off on Halloween. We’ve looked at hundreds of films and of course all the classics like THE EXORCIST, ALIEN, NIGHT OF THE LIVING DEAD, THE WICKERMAN, FRANENSTEIN, DRACULA, TEXAS CHAINSAW MASSACRE, HALLOWEEN, THE HUNGER, INVASION OF THE BODY SNATCHERS (1956), I WALKED WITH A ZOMBIE, CAT PEOPLE (1942) and SUSPIRIA among many other iconic titles. (If these are new to you, start your film fest with them.) Over time, certain films stood out and were included in subsequent screenings. Consider these favorites. 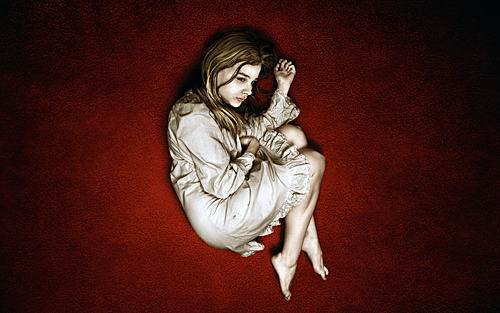 How’s this for a rarity — a fresh and compelling remake that bests the original (Swedish film LET THE RIGHT ONE IN). Writer director Matt Reeves adaptation of John Ajvide Lindqvist’s celebrated vampire novel pushes this touching story of 12 year old Owen, a bullied social misfit and his friendship with Abby, a wiser than her years neighbor, into a zone where impossible, unrequited love and ultimate heartbreak cross paths. This one will haunt your dreams and intrude on your waking life. Chloë Grace Moretz is Abby and Kodi Smit-McPhee is Owen, and they are amazing. Richard Jenkins co-stars. Anchor Bay. Blu-ray. 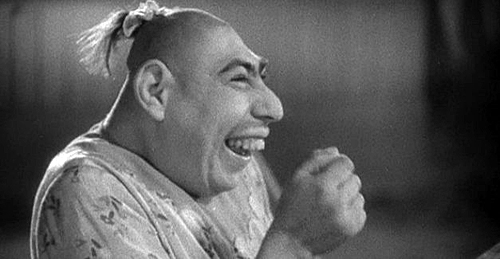 Todd Browning’s masterpiece is in a category of its own. Filmed with real physically and mentally challenged individuals, the story is about unthinkable — but satisfyingly horrific — revenge for cruel behavior in a troupe of circus side show performers. Adapted from Tim Robbins’ magazine story Spurs, this timeless and very humanistic tale can be best enjoyed when one realizes we are all freaks, one way or another. This is a brilliant film with a potent morality. Warner Bros. DVD 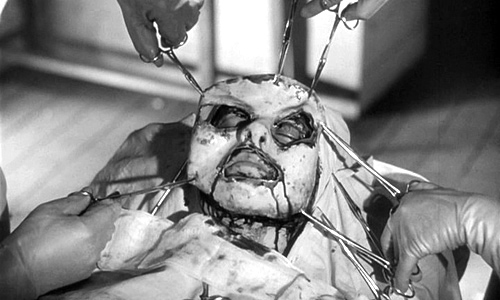 French director Georges Franju’s intense and unsettling tale of obsession and guilt has almost reached cult status stateside. Maybe it’s the title. When Professor Genessier vows to restore the mutilated face of his daughter who was injured in an automobile accident, he kidnaps pretty young women and removes their beautiful features and attempts to graft them onto his daughter’s gruesome face. Naturally, this process has a terrible impact on the unwilling donors, some of whom kill themselves. Director Franju’s near poetic handling of this grotesque material gives it a quality that lifts it far above the expected and ordinary. Dismissed when it was initially released, it is now considered a genuine classic. Criterion. DVD

VAMPYR (1931)
Many serious film buffs considers Carl Theodore Dreyer’s great horror film among the all time finest. It may be a slight story about a young man who discovers a female vampire in a strange castle, but it’s the mood and atmosphere that envelops and lingers. It’s not fair to say this is about style over substance, but certainly the look of it is at the forefront. Based on horror writer Joseph Sheridan Le Fanu’s Carmilla, Dreyer manages a seductive balancing act that toys with our discomfort with skewed images and otherworldly visual effects. There’s also something about the very texture of the vintage black and white photography that makes this a very convincing and frightening experience. I love this exceedingly eerie movie. 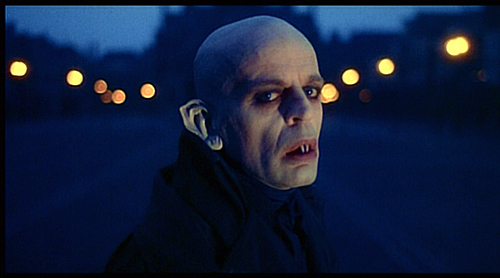 Werner Herzog’s remake of F.W. Murnau’s classic 1922 unauthorized version of Bram Stoker’s novel is a stunning visuals feast with an intense and unforgettable Klaus Kinski as the vampire (in similar make-up as the original!). Anchor Bay/Starz. DVD. 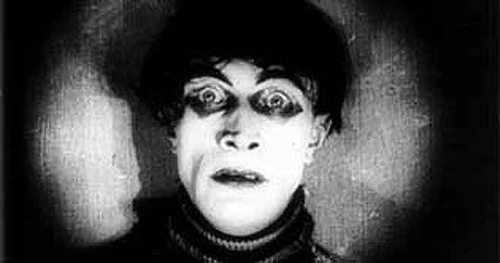 I think Roger Ebert called this masterpiece the first true horror film. It is still a creepy experience that can trigger a strange, disorienting high. Important on many levels, especially for it’s proto German Expressionist style, the film certainly influenced film noir of the 1940s.

But beyond the images, the story that still grips is about a wandering hypnotist, Dr. Caligari, who displays his sleepwalking subject from town to town. In one small German town, a series of murders occurs shortly after Dr. Caligari’s visit. When the police investigate, some big secrets and surprises are revealed. Kino. DVD 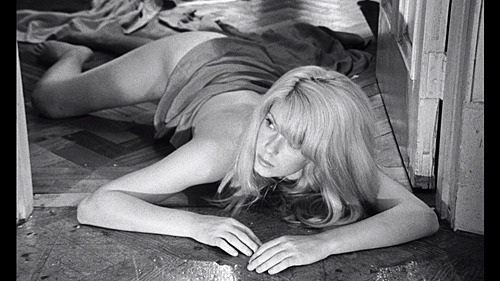 Director Roman Polanski’s first film in English is about schizophrenic Carol Ledoux (Catherine Deneuve), a Belgian manicurist living with her sister in London. The psychological thriller tracks Carol’s horrific spiral into full-fledged madness. The brilliance of the film is how the images and composition convey the crippling claustrophobia of Carol, a virgin both attracted to and repelled by the idea of sex.

When her sister goes on holiday with a married boyfriend, Carol can no longer discern reality. We share her hallucinations and deranged state during which Carol commits two murders. This unsettling film has lost none of it’s muscle. Criterion. Blu-ray. 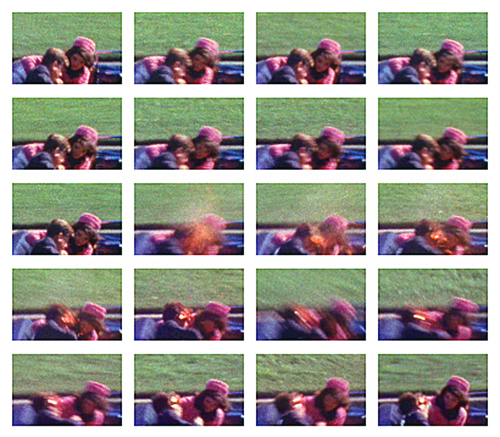 Though only 27 seconds long, and consisting of about 500 frames, Dallas dressmaker Abraham Zapruder’s brief recording of the assassination of John F. Kennedy surely ranks among the top horror films. The 8mm has also generated much controversy as to the true direction of the bullet that explodes Kennedy’s head in a cloud of red mist and flapping flesh. Was the shooter far behind in the Dallas Book Depository or on the Grassy Knoll on the right front? Or, as some claim, the film has been altered in the year before it was released and after it was “damaged” by LIFE magazine. No matter, the film evokes the visceral horror of a moment that will remain present with us forever when everything in America changes.

THE MONSTER THAT CHALLENGED THE WORLD (1957) 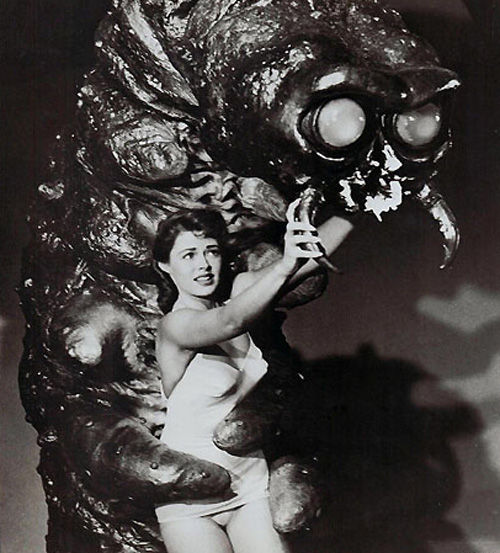 If you think of this as a hard-hitting documentary about the “thing” that dwells in our Salton Sea where his low budget monster movie was filmed, it can be quite frightening — if you’re in the right frame of mind. Nudge nudge. MGM. DVD. 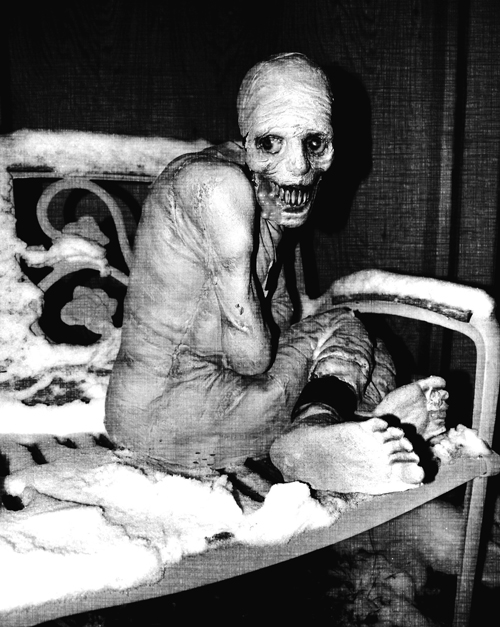 Circulating in private “film clubs,” and extremely difficult to find or verify, this 72 (?) minute black and white documentary, allegedly shot during the 1950s, purports to be edited footage of a three week “medical” experiment during which a ten “volunteers” from the Gulag were submitted to a sleep deprivation study during which no sleep was allowed. The subjects were filmed in a large vault-like room with beds, coolers of food and open toilet/shower facilities. The five men and five women were recorded the entire time and the room was locked with a timer-door that could not be opened from the inside or out until the three weeks had elapsed. To keep them awake, the subjects were exposed to a gas (Orange B) the entire time. There were no windows into or out of the room nor any means of watching those inside the soundproof chamber. After three weeks, when the vault was opened, only one remained alive — the others had been eviscerated and lay scattered in bits and pieces on the bloody floor. The one remaining alive pleaded to be returned to the vault and begged for the gas to be resumed. She — yes, it was a frail older woman — was quickly restrained but was soon unable to speak coherently. When the “researchers” viewed the filmed footage, they saw something unexpected, turned on the gas and locked themselves in the chamber! Or so the story goes. If any reader has seen the film, or knows anyone who has, please contact me. RobinESimmons@aol.com