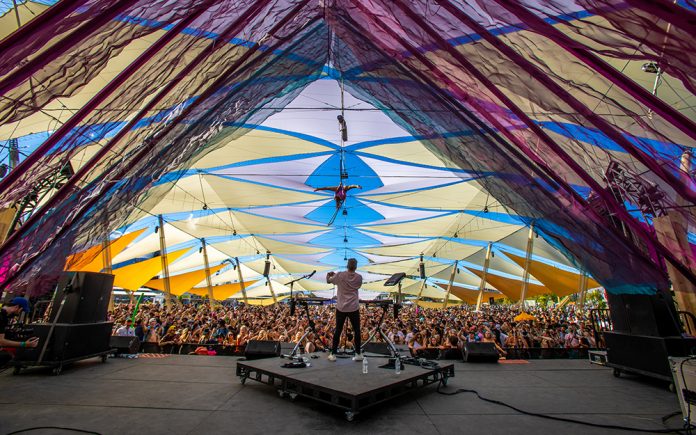 Coachella Fest Weekend 1 has been the long-awaited concert event that the desert has been pining for since 2019. With Weekend 2 on the horizon, the experience is slated to be just as unforgettable. Do LaB remains part of the Coachella scene, serving up a raging stage spectacle since 2004.

Do LaB is an LA-based crew born from the SoCal renegade rave scene who created Lightning in a Bottle, which is celebrated as one of the most creative and immersive festivals in the world. They remain a fiercely independent organization fueled by a DIY spirit that feels distinct to the American west.

The Do LaB stage has become a vital part of the Coachella experience while featuring an always evolving stage design over the years, incredible music, and prominent special guests from the Coachella lineup that are always a huge hit to attendees.

“The current version of the stage is now in its second year. It’s the largest stage that we have ever created and it’s just the evolution of us being out here and growing, and Coachella has allowed us to grow. They gave us a bit more footprint thinking we would just have some nice green grass around us, and we just took that opportunity to make the structure even bigger,” said Dede Flemming, Co-founder/Owner /Chief Financial Officer since the beginning of Do LaB.

For 2022, they will be taking the Warrior One stage concept that they debuted at the last edition of Coachella in 2019 while designing a show with a lot more lights than before with a new production team, and they will also be adding some lasers to the setup to enhance the experience for guests.

Standing at 46 feet with 37,000 square feet of interior space, the Warrior One Stage will be filled with familiar favorites, such as electronic trio and Do LaB regulars The Glitch Mob, pioneering UK producer and DJ Skream, Brazilian artist and worldwide collaborator Vintage Culture, a DJ set by British producer and songwriter Totally Enormous Extinct Dinosaurs, and Nitti Gritti & Party Favor’s house project SIDEPIECE.

“If you build it, they will come. The people fill it up every year and it’s just a lot of fun for us. Watching that evolution over the years where we started as just a little dome in the middle of the field with some art structures to now being a full stage has been fun for us to be a part of. We really appreciate that Coachella allows us to grow and respects what we do and create for them,” shared Flemming.

Do LaB will be taking on its next yearly festival, Lightning in a Bottle, on May 25 through 30 at Buena Vista Lake. Performers hitting the stage will include Glass Animals, Kaytranada, GRiZ, Chet Faker, Black Coffee, Four Tet, SG Lewis, and many more, including educational workshops, wellness activities, and art pieces.