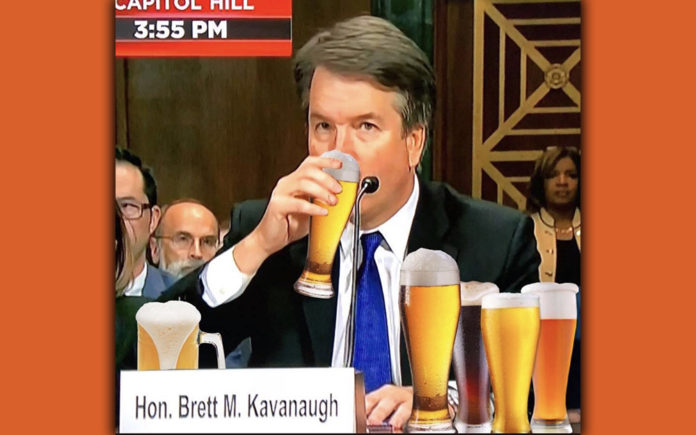 Two things to know about me; I don’t follow football and I don’t watch the news. Therefore, I don’t subscribe to cable TV because Netflix, HBO, and Amazon Prime subscriptions already give me enough crappy programs that I’ll never watch (You should see the hand wringing I do when starting a new series I know I’m never going to finish. Narco’s, Ozark, Jack Ryan; you name it and I’ve only seen the first 3 episodes of it). It was only through the joys and stylistic musings of the internet that I even found out about Justice Brett Kavanaugh’s scandal, and how his love of suds has college-aged Republicans pounding pints in his honor. Ladies and Gentlemen, beer is the meme of the week, and it’s not a good thing. 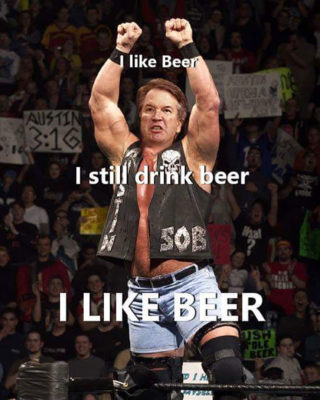 As the intro to Full House alone could tell you, the 1980’s were a much different time. A 1987 Bud Light commercial begins with a trio of roller skating bikini-babes cavorting around an aloha-shirt and sunglasses wearing bull terrier named Spuds Mackenzie, calling him (Did you know that the dog who played Spuds was female? True story.) the ultimate party animal and beckoning him to call them later. Is that what advertisers in the 80’s thought of us? That we wanted over-sexed and dumbed down beer commercials which pandered to the lowest common denominator? Turns out that’s exactly what we wanted! While smaller upstarts like Sierra-Nevada and Samuel Adams were beginning to gain footholds in the micro-brewery niche, the decade was largely ruled by Budweiser, Miller, Coors, and the clever marketing firms who created their branding. According to Bud Light commercials, beer was a tool to help regular people unleash their boisterous, carefree sides. It’s no wonder the image of the stereotypical frat boy involves him quaffing tons of American lager before engaging in raucous, foolish acts. It’s this image that the media has saddled Brett Kavanaugh with, and it’s what turned his senate confirmation into a meme.

Opponents of Kavanaugh’s appointment began mocking him by creating memes; humorous images that are copied and spread virally around the internet. Regardless of incident or detail, the narrative became about Kavanaugh, his open love of beer, and its role in promoting rape-culture in high schools and colleges. Not to be outdone, proponents and supporters of Kavanaugh embraced the frat boy image and ALSO began creating memes celebrating his now-infamous proclamations in favor of beer. The University of Washington’s College Republican group even began promoting an event called “Beers 4 Brett”, a celebration for Brett Kavanaugh’s confirmation to the supreme court. The fifteen college-aged conservatives caused a small stir by celebrating in such a seemingly flippant way, and eventually had to threaten legal-action when the establishment balked at hosting a politically themed event there. And while both sides of the isle promoted the idea that keg parties play a big part in Justice Kavanaugh’s life, beer itself once again became seen as the weapon of choice for foolish young men who are unaware of consequence. In a scandal that brought attention to the alcohol-consuming habits of our nation’s leaders, it’s possible that beer may be vilified as an irresponsible, misogynistic choice. 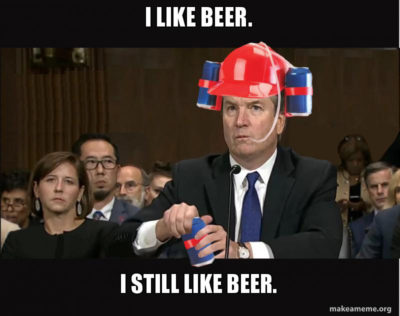 2018 sees the craft beer market expanding and gaining appeal with women, wine drinkers, and the blue-collar workforce who traditionally have been Bug Light drinkers. A big part of that expansion has been craft beer’s ability to market itself an accessible, mainstream drink to be paired with trivia nights and oversized Jenga sets at your local brewery. While pastry stouts and hazy IPA’s might still be associated with bespectacled, bearded hipsters, will the Kavanaugh hearings change that? While the image of Stone Cold Steve Austin smashing cans of Coors Light together doesn’t exactly instill feelings of revulsion, what about when Brett Kavanaugh’s head is superimposed on Steve Austin’s body? While the controversial hearing shaped many opinions, does the pop culture narrative of Justice Kavanaugh committing keg-stands and rape in the early 1980’s harm the mainstream legitimacy that craft beer has been working towards?

Until recently, beer marketing in the US has mostly been accomplished through sincere messages celebrating the working class who understand the appeal of beer, or humorous, misogynistic ads celebrating the boisterous, foolish side of drinking. It was only after companies like Sam Adams began using craft instead of bikini’s as a selling point for their product, did the bigger brewers begin to imitate and market their beers as sophisticated products as well. While the image of Justice Kavanaugh wearing a double-strawed beer helmet to his hearing brings levity to an otherwise tense topic, it does bring beer back to the sophomoric level that it’s tried so hard to rise above. Time will tell if memes and Beers 4 Brett impact the positive cultural image that craft beer has worked hard to foster for the beer industry in general.