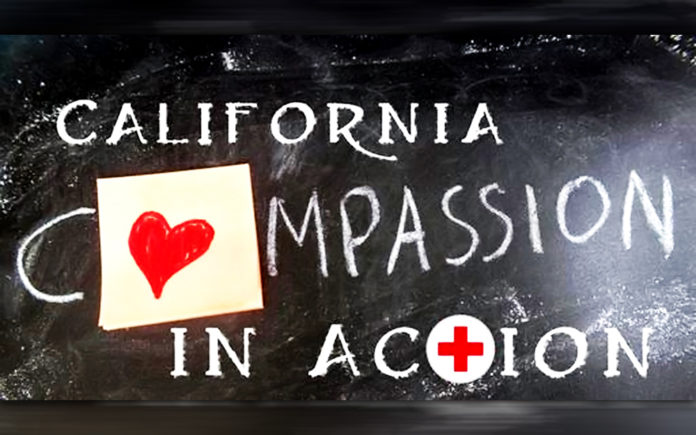 I know I’m not alone when I reach for the television remote and have a little anxiety over what horrors I’m going to see and feel reported on the news.  It seems there is so much need and hurt in the world, and the idea of being able to make a difference seems overwhelming.  It would be an easy thing to tell myself that it is just too big and I am powerless, giving me the excuse of removing my heart and mind from the things going on around me.  Fortunately, I am surrounded by a team and leaders who just don’t roll that way.  This Friday, November 30 at 6 pm, a wonderful lineup of compassionate artists will take the stage to earn your voluntary $10 donation.  These donations will go directly to the American Red Cross to assist in the recovery from the most devastating fire in California history.  Door donations will also be directed to the Ventura County Community Foundation and their well-organized efforts to support the victims and their families of the tragic shooting at Borderline Bar & Grill this month, a venue not unlike our own. 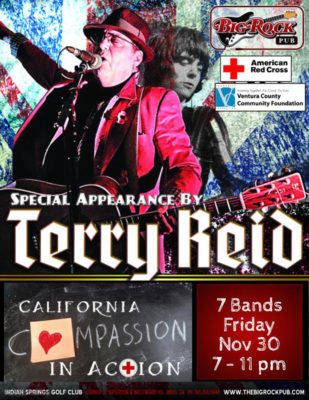 We are so grateful to announce that the incomparable Terry Reid, aka “Super Lungs,” will make a special acoustic appearance on behalf of the charities. Terry Reid was part of the British invasion, opening for the Rolling Stones during their American tours. He’s recorded and performed with all the greats ever since. Reid has never stopped writing or performing here in America or in England, and can often be found on stage or in the studio with Joe Perry of Aerosmith – that is if he isn’t busy hanging out in Johnny Depp’s kitchen/studio, or on the Roxy stage in Hollywood with the rest of the Hollywood Vampires. Reid is an incredibly passionate performer with timeless recordings, who also happens to have a huge heart. We’re extremely grateful to him for donating his time and being part of this.

First on board was James Johnson and his band of brothers known as Rival Alaska.  They had the date booked to play, but immediately agreed to opening their date up on behalf of our charities.  Johnson is a passionate artist who takes the music business seriously, and he should.  He is incredibly talented as are his bandmates. But it is his heart and tenacity that are impressive.  Despite setbacks and difficulties, he and the rest of his bandmembers always rise to the occasion, and always end up better than they were before.  With a little luck, their hard work will one day pay off in bigger ways by industry standards.  They are going to be a great band to watch not only this Friday, but in the years to come.

Next on board was Courtney Chambers.  A full-time troubadour, and an inspirational songwriter and performer, getting Chambers on board took all of one minute.  I asked, explained what is was for in the briefest of detail, and said, “Yes.” Courtney Chambers is a diverse artist and accomplished musician. Whether you see her in a full band or solo, it is her passion and uniquely powerful sweetness that endears you. Don’t get me wrong – sweet she is, but if you follow her at all, you quickly find out she is an absolute badass.  Her recordings are beautiful, but her live performances are magic.

Grady James was third on the list but only because he was my third phone call.  Home from working the dream in Nashville, this incredibly talented singer/songwriter and smoking guitar player is as good as they come, inside and out.  The guy has genuine talent, heart and proper raising spewing out of his pours.  His rocking, three-piece, hotrod band will wow you as they did the crowd at our recent Cars, Stars, Rock ‘N’ Roll and BBQ Festival.

Brad Parker was another instant “yes” in my scramble to make this concert happen.  The man who has written, recorded and/or performed with greats like Cher, Cindy Lauper and Grammy Award Winning, Country Hall of Fame inductee, Kathy Mattea, has a heart as big and humble as they come.  His song, “Nobody’s Going to Rain on Our Parade,” recorded by Mattea, earned Parker the number one hit record that now hangs on his wall. Parker jumps at the opportunity to be part of our local music scene and to help our community when it’s hurting.  His songs are soulful, unforgettable and inspiring, as are his encouraging words and mentorship to less experienced artists like myself.  He is one of our precious musical gems who, lucky for us, has found a home here in our desert.

The Roadrunners featuring Brad Mercer gathered all their members quickly to take part in the evening.  Stan Foreman, the founder of the group, spent decades as Capitol Record’s A&R guy, working with everyone from Tina Turner when she launched out on her own, to Garth Brooks and Dave Grohl.  The man has a huge collection of gold and platinum albums that he contributed to from artists as wide ranging as Poison, MC Hammer and The Foo Fighters. Still, his greatest passion is performing the music.  The formidable pianist, now retired, manages one of the workingest bands in the desert.  While they are sought after by many prestigious country clubs regularly, we were fortunate to find a break in The Roadrunner’s performance schedule.  The most recent version of The Roadrunners, already packed with some of the desert’s leading musicians, includes the fabulous Brad Mercer.  With a huge career in the entertainment industry doing everything from comedy with Jay Leno to producing and acting in movies, I personally feel that Mercer’s inner light shines brightest when he picks up his guitar and performs.  This will be an incredible treat for all those attending and supporting our charities.

Coming all the way from Idyllwild, Cole Withers is once again lending musical talents for a cause.  The appearance at Big Rock Pub for the Professional Firefighter’s Benevolent Fund, is an organization that helps injured or fallen fire heroes and their families.  The soulful Bob-Seager-esque vocals and unforgettable songs will start off our event at 6 pm.  I, Lisa Lynn Morgan, will follow with a few songs as these are two charities that I have personal experience with. I would be remiss to not follow in the generous footsteps of these other amazing musicians.

American Red Cross:  As a former DAT (Disaster Action Team) member for our local Red Cross chapter, I was second on the scene to many home fires here locally.  I witnessed the heartbreak as well as the relief that our local Red Cross was able to bring.  The mission of the American Red Cross is to alleviate human suffering in the face of emergencies by mobilizing the power of volunteers and the generosity of donors. Disaster relief is at the heart of our mission. When disasters like the California Wildfires threaten or strike, the Red Cross mobilizes its dedicated disaster workforce — 95 percent volunteers — to deliver shelter, meals, health and mental health services and other assistance to address essential needs of disaster survivors.  For days, deadly and destructive wildfires burned out of control in Northern and Southern California. Fueled by dry conditions and high winds, the fires ravaged everything in their paths. In Northern California, the Camp Fire became the most destructive and deadliest wildfire in state history. It has already burned more than 130,000 acres and destroyed more than 7,600 homes, including the entire small town of Paradise. The inferno has, sadly, also taken at least 48 lives.  The situation is dire, but the Red Cross is there, doing all they can to deliver aid where it’s needed most, providing physical and emotional support during people’s darkest moments.

The type of support provided to victims includes:  Food money, rent money, groceries, travel expenses (gas, hotel, flight), money to help get their drivers licenses back if lost in the chaos, cellphones which were lost, clothes and shoes, baby supplies for those with young children, etc.  This support compliments the services that the California Victim Compensation Board (CalVCB) provides to victims and survivors.  The foundation is working directly with their Advocate Liaison Claimant Assistance Branch to not duplicate efforts and to maximize the impact of each philanthropic dollar.

How a Little Can Go a Long Way:

A single $10 bill is not likely going to put a dent in what it is going to take for so many to recover from their shock, their losses and their pain.  However, working together, pooling our resources with these two organizations, we are all actively being part of the solution.  The difference will not only be felt by those immediately affected by these tragedies, but it will be felt tangibly at Big Rock Friday night.  These bands are full of love and compassion and they will be bringing it with them.  In all honesty, we are doing more than easing the pain of others, we are easing the pain in our own hearts. We are keeping our hearts open to the idea that the smallest drop of hope will ultimately win in the long run.  We are actively being a light, however small, amidst the dark by doing for others in a way we hope might be done for us should we, God forbid, ever fall under similar circumstances. And, even better, we’ll be doing it together as a community.