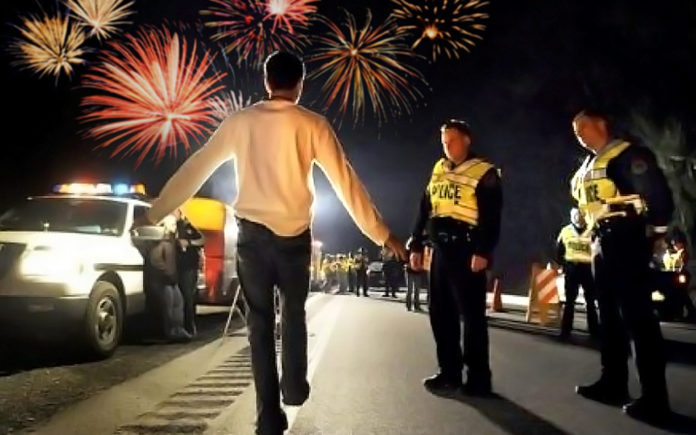 July 4th is upon us, meaning parties and drinking…and consuming more beers or Tequila than you realized. There are many checkpoints on celebratory holidays. Some of you or your friends will be stopped and arrested for a DUI. So do yourself a favor and DON’T DRINK AND DRIVE or TEXT. Call a Taxi or Uber…….it is a lot cheaper than calling me.

Drivers believe they were “not drunk” and should win their case because they did not deserve to be arrested. The reality of life is that you do not have to be drunk, you merely have to be under the influence. That is a function of how many drinks you consumed and how much alcohol was in each drink …as well as the time lapse and your weight.

Failure to immediately give the officer your license, registration and insurance may lead to a separate Misdemeanor arrest. The officer will comment in the report on how the driver spent a lot of time “fumbling in their purse/wallet”. This suggests to the officer that the driver may be under the influence.

Field Sobriety and Breath tests at the scene are optional as are the questions. They can only hurt your case. Many lawyers believe that taking a Blood Test at the police station or hospital is preferable. Arguably with the passage of time, the breath reading will decrease by the time the blood is drawn………..unless the driver just chugged a drink and the alcohol had not yet gotten into the blood system. The average driver is not aware that it takes about an hour for the alcohol to go into your blood stream and an hour to come out…………but now YOU DO!

If the officer smells alcohol on your breath and he will ask you where and how much alcohol you consumed. However, the “Dose Makes the Poison!” In other words it’s the Amount of Alcohol, NOT the Number of Drinks that are Important.

Clients swear they only had one drink but the legal system looks at the total amount of alcohol not the number of drinks. One drink is 12 oz. beer, 4 ounces of wine or 1 ounce of alcohol. Thus when someone uses a red Costco 16 oz. cup and fills the cup with Vodka and tops it off with OJ they are consuming 10-12 ounces of alcohol or 10-12 drinks.

Though I am sometimes referred to as a DUI defense lawyer, I choose to not view my clients as criminals. I prefer to view them and more importantly to treat them as good, honest people that have found themselves in a scary, isolated and unfortunate situation.