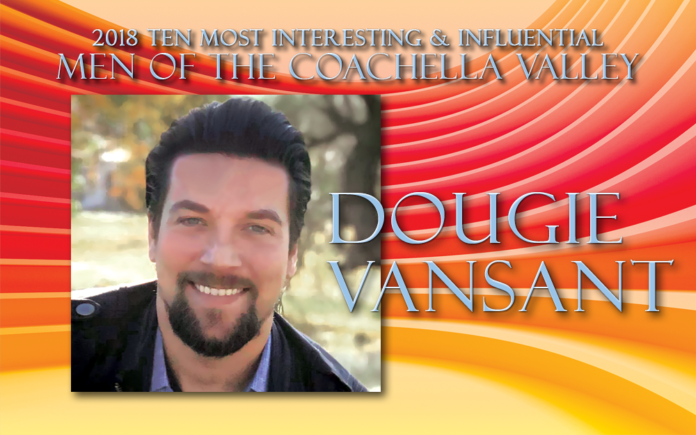 Douglas L. VanSant, Jr. – that’s Dougie to you – is a jack of all trades. And well, he’s a master of them too. His main gig is the front man (as well as guitarist and manager) for the Palm Desert-based indie dream-surf band, The Flusters. Dougie’s resume reads like a combination of the liner notes for an album and the end credits of a movie: Singer, Songwriter, Multi-instrumentalist, Composer, Producer, Cinematographer, Editor, Graphic Designer, Actor. You get the idea. Since one band wasn’t ambitious enough for him, he recently formed Trio NV, an acoustic act that covers stripped-down, well-known favorites. In addition to playing music professionally, he co-owns and operates a music rehearsal studio in Palm Desert with his fellow Flusters bandmates. He freelances as a Commercial Ad Producer, Editor, Soundtrack Composer, Jingle Writer, and Voiceover Actor. All this, and one wonders when he finds time to sleep. 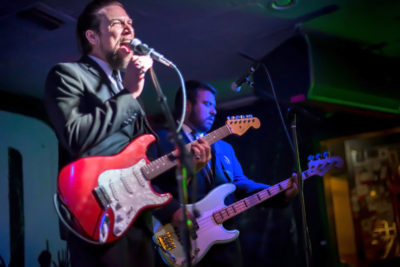 Dougie’s vibe is that of a California native, but he actually just moved here in 2013. He was born in Bridgeton, New Jersey, where he grew up and attended school until he went to college at Temple University in Philadelphia. He currently lives in Palm Desert with his girlfriend (who is also his Trio NV bandmate), Meagan, their Siberian husky puppy, Bowie, and two cats, Tusk and Quaker. Although it wasn’t until he was thirty that Dougie started to fully focus his mind, body, and spirit on monetizing his skills as a creative and performer, he’s always known that he was born to perform and create and never found anything else that made him feel whole.

“My current career path has been calling me loudly as far back as I can remember. I’ve been a creative since childhood but creative skills can often be stifled by the traditional, conservative idea that the arts should be viewed as no more than a hobby. I struggled a lot as a kid trying to right-fit myself but never found my true skin until I started writing music,” shared Dougie. Until finding his niche, he traveled down several career paths, namely bartender, caseworker, cook, salesman, administrative assistant, to name a few. As recently as a year ago, Doug was working in sales until he embarked on a national tour with The Flusters, started life as a full-time artist and never looked back. 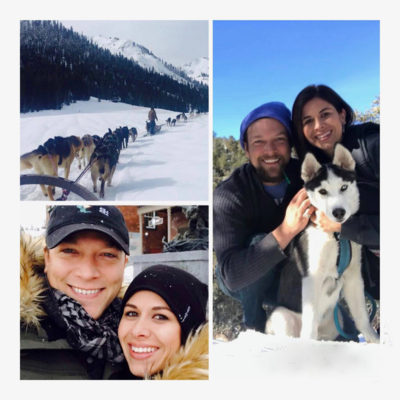 The Flusters have earned tons of well-deserved respect in the valley. They were one of only a few local bands chosen by Goldenvoice to play at Coachella in 2016 and have won many awards, including Best Live Performance Band at the 2017 CV Music Awards, and two-time Best Local Band by a local publication. Their 2018 CV Weekly Music Award Nominations include: Best Band, Best Alternative Rock Band, Best Live Performance Band, Best Male Vocalist, and Best Song – “Everyday Dreaming”, while Dougie was nominated as Best Front Man and his other band, Trio NV, was nominated as Best New Band. (Winners of these nominations will be announced on June 3rd.) The Flusters toured nationally and recently played with Stone Temple Pilots, The Psychedelic Furs, and She Wants Revenge at Rhythm, Wine, and Brews Fest. All of these accolades are rewards in and of themselves, but Dougie counts the most rewarding part of his music career that he’s able to make a living by pouring his passion and energy into what he truly loves and create a legacy for himself – as opposed to creating one for someone else. Dougie claims if he were not in entertainment he would still utilize his creativity and work for himself, make people smile, bring friends and family together, travel and enjoy his life. That is to say, he would own and operate a food truck. 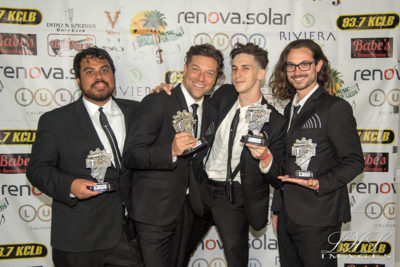 While the path to a music career was always clear in his heart, it wasn’t an easy road. Dougie struggled with addiction and alcoholism for nearly twenty years. His addiction caused destruction and he lost a lot – even coming close to dying several times before finding recovery. “To this day, I have no idea what kept me alive other than forces greater than human understanding. I’ve been given the gift of living two lifetimes in one life and it inspires me every day.” These days, he constantly finds way to refresh his mind, body, and spirit. He enjoys activities with his dog, attending the Center for Spiritual Living for meditation and reflection, cooking, cleaning, praying, and most importantly, utilizing the tools for living life on life’s terms – something he learned from the program of recovery that saved his life. Now that he’s his own boss, he finds it’s easier to get wrapped up in time-wasting activities. To keep it together in today’s world he finds that if his goals stay clear and his resolve remains strong, he’s able to block out the static long enough to stay sane. He subscribes to the mantra “This too shall pass,” which reminds him that life is a series of peaks and valleys and that we are not meant to stay rooted in sadness or in happiness, that life is a cyclical and ever-changing series of unpredictable events and it is our adaptation and spirit that makes us who we are.

When Dougie isn’t playing in either of his bands, he loves to adventure travel with his dog and girlfriend in tow. Their favorite place to go currently is Laguna Beach, which they love for its dog-friendliness, easy-access beach, and restaurants. When he has free time, his favorite movies and TV shows to watch are The Goonies, Pee Wee’s Big Adventure, and The Office. His favorite musical artists are Roy Orbison, Tears for Fears, The Pixies, and The Smiths. His all-time favorite album is Chris Cornell’s Euphoria Morning. His favorite book is Everybody Poops. Really! He’s also a huge Philly sports fan and loves the Philadelphia Eagles, in particular (even before their Super Bowl win months ago).

Dougie has done a good amount of theatre and is a self-professed “total nerd for it.” He’s starred in such shows as 42nd St, Westside Story, Seussical the Musical, Bye Bye Birdie, A Christmas Carol, and Rumors. It’s been over ten years since he’s done theater, but he’d willing to return for two (and only two) roles: ‘Roger’ in Rent or ‘Hedwig’ in Hedwig and the Angry Inch.

Dougie’s roots are never far from him – indeed that’s the case when he’s asked who he respects most in the world. Without hesitation, he answers that it’s his parents. Douglas VanSant, Sr., he says, worked hard every day of his life so his two sons never wanted for anything. By his own admission, Dougie was defiant as a child and hard to handle, constantly testing his father’s patience and pushing boundaries. This caused the two to bump heads often. Once Dougie got sober, he began to appreciate his father for what he was – the life of the party, a great storyteller, beloved by all who know him. He’s someone who Dougie now calls his “best friend in the world.” His mother, Theresa, also worked hard to make sure Dougie and his brother were well-provided for. He owes his love of performance to her – as a child he would dance on her feet and sing Sinatra. To this day, she still loves hearing her son sing and watching him perform as much as she did back then. During his darkest days, she believed in his talent and star power and never gave up on him. She was his first and biggest fan and most devout supporter.

Dougie is supporting the Academy of Musical Performance (AMP). AMP is a contemporary music education program whose goal is to enrich the lives of young musicians living in the Coachella Valley by fostering productivity and social responsibility through creativity, communication, and collaboration in the development and enhancement of musical performance and concert production skills through participation in a “rock band” style educational setting. “Growing up with the dream of being a rock star, I would have freaked if something like this was available to me. I’ve been lucky enough to work with AMP on several levels and I’ve seen the amazing effect it has on young, local musicians. As a member of local art & music community, I find this charity extremely important to support and would do anything within my power to ensure it continuation and growth.”