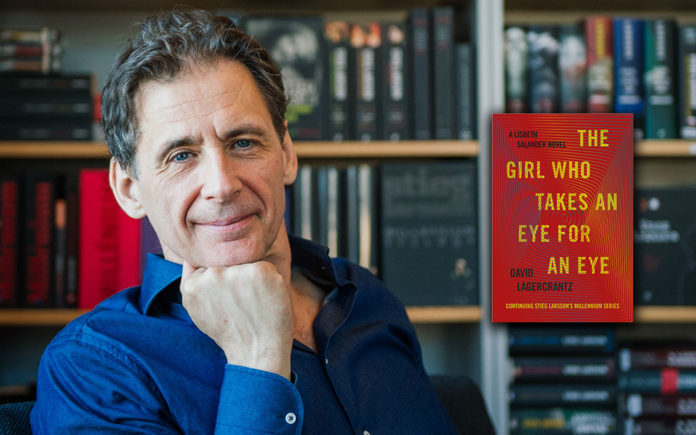 Who can forget The Girl With the Dragon Tattoo?  Protagonist Lisbeth Salander, the petit, genius, Goth-hacker chick bent on justice, became one of contemporary literature’s favorite characters created by Swedish author Stieg Larsson.

After Larsson’s untimely death in 2004, problems regarding the rights to his characters, his trilogy “Millennium” series and an unpublished manuscript became an issue in Sweden between Larsson’s long-time, live-in girlfriend and Larsson’s family members.   However, it seems they have worked that out because the series continues with gusto.

The Girl Who Takes an Eye for an Eye by David Lagercrantz – translated by George Goulding – (Alfred Knopf, 351 pages) is the fifth in the Salander franchise.  After the trilogy came The Girl in the Spider’s Web which was also written by Lagercrantz.

In this fifth installment, Salander is locked-up in a secure yet failing women’s prison, run not by the authorities, but by inmates and their gang affiliates on the outside.

As is Salander’s nature, she hates injustice and when a Muslim girl is regularly abused by Benito, a notorious inmate, Salander must step in.   Benito is twice Salander’s height and three times her weight, but nonetheless, Salander brings the monster abuser down.

At the same time, Salander has set her helpers — her attorney, caseworkers and journalist pal Mikael Blomkvist, to assist the Muslim girl who was wrongfully convicted, and also find the people responsible for Salander’s troubled childhood.

Once Benito is crushed – literally– and sent out of the prison, Salander finds she is the target of Benito’s criminal network.

Unfazed by the threats, Salander is much more interested in uncovering the facts of the horrible children’s adoption program she was forced into as an orphan by government officials.  She wants the mastermind of the “Registry” aka Project 9, where they separated twins to determine the effects of nurture versus nature.

Like no one else can, Salander, along with assistance from her pals, hacks and tracks those responsible for dividing families and then seeks her revenge.

While discovering those who her hurt most, Salander is also able to restore the Muslim girl’s freedom after proving the girl’s brothers guilty of murder.

I have always liked the kick-ass nature of Lisbeth Salander.  Smart and tough, she can take a beating and get up and still do damage – if not physically then electronically.

Salander is released from prison on her own reconnaissance for reasons that are not clear.  But, it hardly matters because, one, certainly she was unfairly convicted, and two, she needs to get her hands –literally– on those horrible people who destroyed the lives of so many children.  And that is exactly what Salander does.  She hunts down the menacing, evil villain doctor Rakel Greitz.

The entire story takes place over ten days.  The narrative is well-constructed and is engaging.  For new readers in this series it is not necessary to know the returning characters from previous books.  However, as in any serial series, it is fun to revisit the many quirky characters, get re-acquainted, and see what they are up to now.  In fact, the author includes a “Continuing Characters in the Millennium Series” index in the books opening pages.

There is a revelation about Salander’s magnificent dragon tattoo, which was a nice surprise.  I appreciated Salander’s point of view as she described the first time she saw the statue of Saint George killing the dragon in a Stockholm cathedral.  She identified with the dragon as it struggled to live under the sword.

I was most caught-up with the monozygotic mirror twins Leo and Dan who were separated at birth and placed in socio-economically opposite family environments yet still had significant matching talents and personality traits!

The whole issue and debate about nature versus nurture is a fascinating subject that helps drive the narrative.  The story makes references to studies done in Europe and the United States, as scientist made efforts to determine if the way children grew up made a difference.

What readers have learned in the Millennial series through the life of Salander is that both nurture and nature indeed does impact kids.  But, of course if Salander had grown up in a more suitable environment with the right parents and opportunities there would be no series.

I wonder how many people, Salander included (if she were a living breathing person), would want to change who they are today by reconstructing their past.  Maybe some, maybe many or maybe none.  Would you?