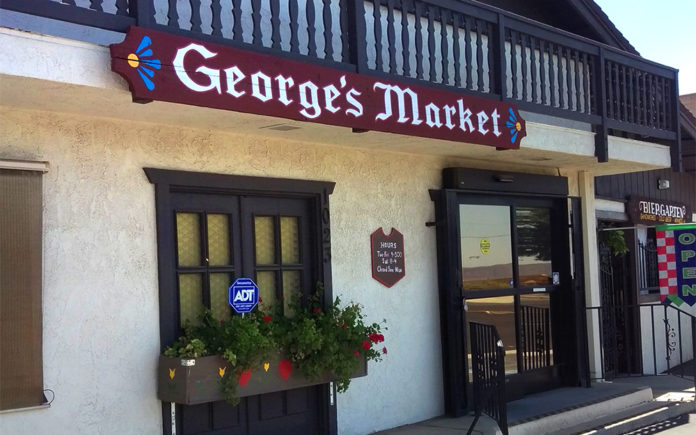 How far would you drive for incredible deli? Well, if you’ve been to George’s Market in Calimesa, you would agree to commit to at least that range. Owned by George Troelenberg, the popular and well-known spot has been feeding those in the know for almost 50 years. Housed in a chalet styled building reminiscent of somewhere in the German Alps, George’s Market is timelessly quaint and inviting. They specialize in German delicacies, offering a wide array of cuts of meat and sausages. On the deli side, customers will find a bevy of deli meats such as Salami’s, Liverwurst and out of this world Mortadella. There are also cheeses, and prepared salads, including traditional German Potato Salad served warm upon request and gorgeous pastries. George’s also offers all kinds of German and European goods, from candies, to excellent import beer. 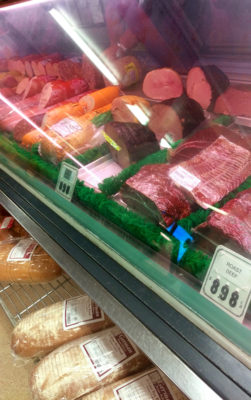 I recall the first time that I was introduced to the landmark deli. It was back in the mid 1990’s on a trip with my sister Eliane to Oak Glen. We were dining at a dear friend’s house and stopped off at George’s Market to pick up some items. There was George himself behind the counter, adorable and just a tad flirtatious, with a jolly demeanor reminiscent of a feel food Christmas character. George’s charisma was and still is quite measurable, and I don’t exaggerate when I say that he looks the same now as he did when I first saw him. We ordered a beautiful pork loin that we later cooked with a cream sauce and sliced apples, and purchased some German bread along with other accompaniments. Since then, I’ve been frequenting George’s with delicious anticipation. 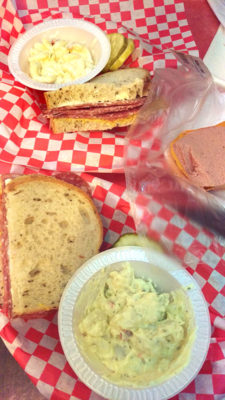 Stopping by George’s is a must for me on day trips to Oak Glen for their apple season, and when on route to the trippy little downtown area of Yucaipa, where antiquing is plentiful. When I stop at George’s, there are a couple of must have’s that I well….must have. They include the spicy German Salami, and creamy style Liverwurst. I mean… I can taste the richness of the Liverwurst now…soft and delicate, with a distinct flavor that seems like it will last forever, but then fades memorably with every bite, only to beckon another. Liverwurst Yummers!! I have it with a slice of their German bread, which is easily sharable. I sometimes add some of their potato or macaroni salad, and have been known to imbibe on a beer such as the perfectly balanced (in my opinion) Warsteiner Pilsener. But more often than not, I choose one of their kooky cream sodas or root beer from the cooler. 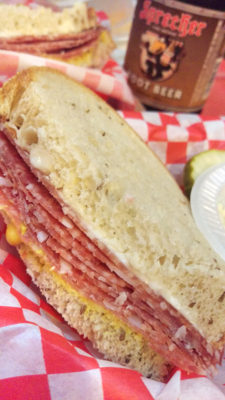 Seating is offered at George’s to dine in. In the winter it’s pleasant to sit on their patio, complete with a trickling fountain, and in the summer I prefer to sit indoors. Although the latter is slightly limited, it is cozy.

Conveniently located off of the 10 freeway, George’s Market is great place to stop and have a taste of authentic German deli, while taking in all the charm that is George’s. Here’s to another 50 years!