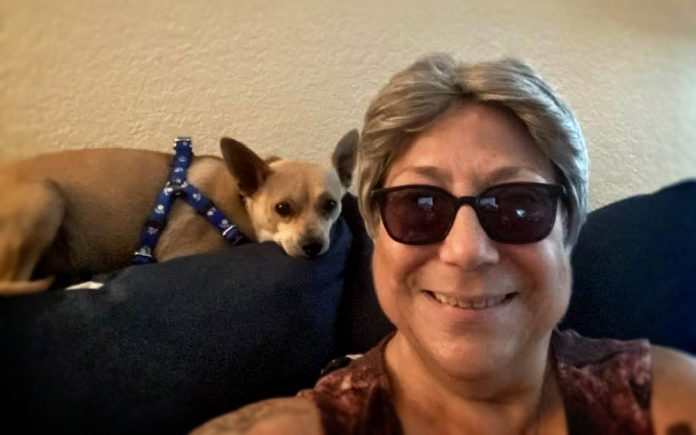 There is a perfect home for every dog!  Duke, a 2-year old Chihuahua mix boy, waited to be adopted at the Loving All Animals shelter for several months.  Duke greeted everyone with an angry bark.  He loved to receive treats, but would quickly retreat, not permitting petting or other physical contact.

Duke was relinquished to Loving All Animals by a woman living in the high desert who took in homeless dogs no one wanted.  Some rescuers have trouble saying “No” and become overwhelmed when so many dogs are in need. The group of dogs housed with Duke in the high desert had little contact with people, and were occasionally left food.  Four of them came to Loving All Animals, but Duke stood out in the group for having behavior issues.  Weighing in at 19 pounds, he was bigger than the others and exhibited Alpha qualities.  A vet exam indicated he was in relatively good health.  However, he had no prior medical care and the organization arranged for him to be vaccinated, microchipped and neutered.

Loving All Animals’ wonderful volunteers sat calmly near Duke for extended times, helping him learn he could be safe with people.  Behavior like Duke’s is a very treatable condition, but can take time and patience.  Moving forward, Loving All Animals will soon implement behavior training classes that address a variety of canine behavior issues.

Meanwhile, Duke’s behavior kept prospective adopters at arms-length.  The other three dogs from the high desert were soon adopted.  Most people want to adopt a dog who happily greets them with a wagging tail.  On April 26, 2021, things changed when Mary Ann Ilaria came for a meet and greet appointment with Duke.  She arrived armed with treats and an open heart. Though not on perfect behavior, Duke seemed more receptive to this visitor.  Dogs understand up to 1,000 words and they know our intent.  He responded even more favorably when Mary Ann returned two days later to adopt him, permitting her to hold him for a happy adoption photo.  It seemed like a miracle!

Mary Ann explains why she selected Duke in favor of dogs who were more sociable.  “When I adopt a dog it’s because of a feeling I get when I first see them and then interact with them.  It just has to feel right.”  She was able to connect with this pup and see the sweet dog inside his protective exterior stance.  Duke in turn felt her acceptance and compassion, which caused him to relax.

He is now “Doug”, much of his “Duke” behavior left behind.  Weeks later, Mary Ann tells us about Duke’s transformation in her home.  She reports, “Doug is very loving dog, he enjoys snuggling next to me on the couch when we watch television.  He loves to be petted.  He is so smart, he easily learned the commands OFF and COME.  I knew he hadn’t had much love before, but he is the sweetest dog with me.  He shares my pillow at night!” 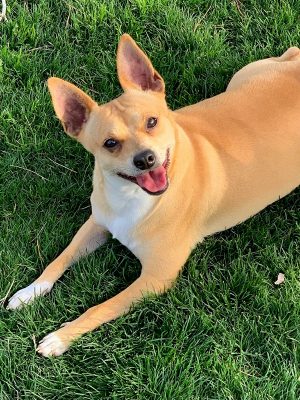 Mary Ann had trouble putting on Doug’s harness so they could go for walks.  Occasionally he would sit by the kitchen door and would revert to his old “barking at you” behavior when she approached the kitchen.  Loving All Animals referred her to Sandy Miller, local dog trainer extraordinaire, who provides complimentary phone consults to rescue dogs adopted through Loving All Animals.  Sandy suggested she purchase a harness that Doug can step into, rather than one that goes over his head while his human stands over him.  Doug and Mary Ann now enjoy their walks.  Sandy theorizes Doug was previously abused by someone who dashed towards him, and suggested Mary Ann proceed slowly into the kitchen and toss a couple treats.  She said it may take a couple months of loving patience for Doug to overcome this reaction.

Dogs transform when they are in the right home.  We humans transform when we give a rescue dog a “second chance”. Though Doug is a “work in progress”, his future is bright as he brings love and joy into his new home.  We celebrate another happy ending at Loving All Animals for a dog now named Doug and his happy new human Mom!  Please check out Loving All Animals’ website, www.lovingallanimals.org and consider making a donation to help them continue helping homeless animals.  We love adopters like Mary Ann who adopt a dog who needs them the most!