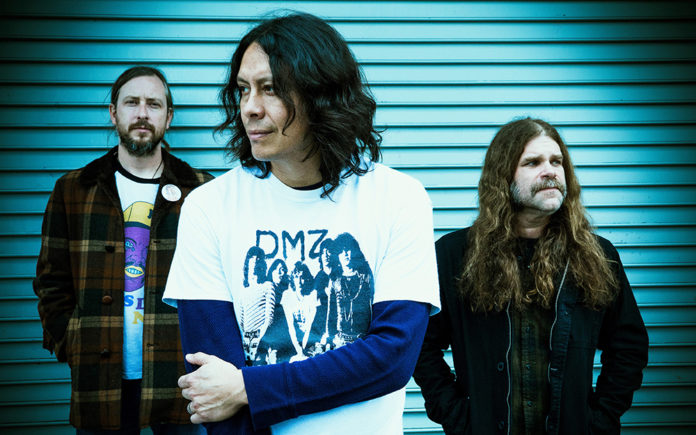 San Diego band, Earthless, has been melting faces for well over a decade now. The mix of Mario Rubalcaba’s drums, Mike Eginton’s bass, and Isaiah Mitchell’s guitar make for a perfect psychedelic rock sound. The band is heavily influenced by Kraut Rock and Japanese Psychedelic, and it shows. They have become favorites in the psychedelic rock scene.

The trio is known for their relatively long instrumentals and unending jams while playing live. None of their albums have featured vocals… until now. Their newest release, Black Heaven, is way out of the norm in this regard. Almost every song features Isaiah Mitchell on vocals. Also new to this release are sub 20 minute songs. Black Heaven was recorded at Dave Catching’s Joshua Tree studio Rancho De La Luna.

Earthless are making their return to Pappy and Harriet’s on Thursday, March 8. They will be joined by Japanese psychedelic band Kikagako Moyo, and L.A. based JJUUJJUU. If you are a fan of psychedelic rock, you have to get to this show. If you saw Earthless at last year’s Desert Generator, you are in for a treat. Earthless will be indoors this time around.

CV Weekly: Where did you grow up? Was music always a part of your life?

Isaiah Mitchell: “Yeah. I grew up in a town called Boerne in the hill country of Texas. My dad was a bassist. We always had band practices in the garage. Then we moved to San Diego when I was in like 2nd grade. We had another garage, so there were more band practices. I’ve spent more of my life in Encinitas than anywhere else.”

CVW: How did you, Mike, and Mario meet? 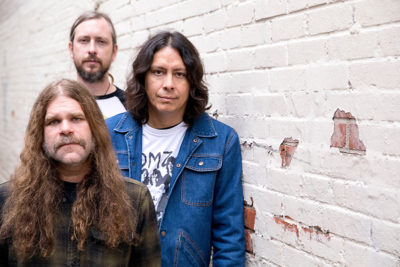 Mitchell: “I worked at a guitar store in Encinitas on PCH called Moonlight Music. Those guys would come into the guitar shop. Mario was in a band with one of my coworkers, Scott Bartiloni called Clikatat Ikatowi. Same with Mike. He was buddies with Scott as well. I met everyone through that guitar shop.”

CVW: When Earthless formed, was it your intention to play shows, or was it just a group of guys to jam with?

Mitchell: “The first time we got together, we just jammed. It was a lot of fun. Then we agreed that we all wanted to do a show. We played a show, and I didn’t know if it would be anything more than that show. The other guys thought it was a lot of fun and decided we should do it again. That’s when we knew it was a band. I wasn’t sure it was what was going to happen, but it stuck.”

CVW: Just as your momentum started, you moved away to Northern California. How did this impact the band?

Mitchell: “We made it work. I mean, yeah, we’re not practicing every day, but we’ve put out a few records since I’ve been gone. It hinders the weekly practices, but when we do get together, it makes those times more productive because the time is more precious. We’ve always done stuff at our pace. We never feel we have to write a record. Everything just comes naturally. We might have been a bit more prolific releasing albums, but I don’t know. It seems it’s working for us and not getting in the way.” 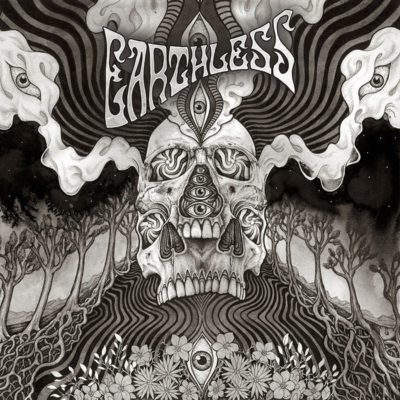 CVW: Black Heaven is the first album that is not an instrumental. Did this come naturally?

Mitchell: “Yeah, it came naturally. We weren’t thinking we need vocals on this record, but we did want to try something new. When we were recording, the strongest songs had vocals. It was not intended. We were thinking maybe one song with vocals.”

CVW: Also new to Black Heaven, there are short songs. Was it difficult to write shorter songs?

Mitchell: “That seemed pretty natural as well. It seems the songs got served as they wanted to be presented. “Volt Rush” felt perfect as is. It’s kind of funny to all of us how short it is, but it’s a fun quick little in and out kind of a tune. There wasn’t a lot of thought. It’s just what felt right.”

CVW: Recording at Rancho De La Luna is magical. Dave’s setup is unlike any studio I’ve seen. It seems a perfect fit for Earthless. Was that the case?

Mitchell: “Yeah. It was fantastic. It’s a great studio with great gear. Just the luxury of being on site 24/7 was a total good time. It was awesome!”

CVW: You guys played Desert Generator last year, and are making your return to Pappy and Harriet’s. Can you tell me about the vibe of Pappy’s?

Mitchell: “It’s a pretty legendary spot. It’s an honor to get to play there. Playing out in the rural desert is a treat. There’s no place like it on the planet. It’s a great venue for people to go watch music, and people to go play music.”

CVW: Anything coming up with your other projects?

Mitchell: “Not really. Earthless is going to be pretty busy. I’m just coming home from a Golden Void European tour and Golden Void will be playing Stoned and Dusted Memorial Day weekend.”

Tickets to the Pappy and Harriet’s show are available on Pappyandharriets.com

Tickets to see Golden Void and info on Stoned and Dusted are available on StonedandDusted.com