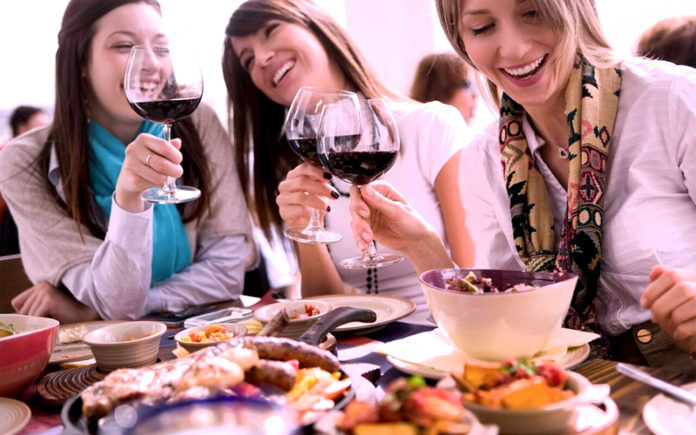 So what do you think? Eating a healthy diet, maintaining a healthy body weight, exercising regularly, not smoking, and drinking alcohol in moderation, do you reasonably believe that following these five lifestyle habits can add several years to your lifespan?

A new study just published by Harvard’s School of Public Health claims itself to be the first comprehensive analysis that offers a clear conclusion that the average Joe and Joanne can add years to their living by following the five “low risk lifestyle” practices.  And we are particularly nosey about the factoid that includes “drinking in moderation”.

Of course previous studies have included moderate alcohol consumption as part of a healthy lifestyle—but then soon enough, we’ll read of other studies that point out that alcohol is a poison and should not be entertained as something desirable.  I don’t know about you, but come four or five o’clock in the late afternoon, a nice glass of vino or a chilled Martini sounds quite desirable.

Anyway—here’s the latest; I’ll summarize by quoting from different sources:

“The study, published April 30 in Circulation, the American Heart Association’s journal on cardiovascular disease research, looked at 34 years of data from 78,865 women and 27 years of data from 44,354 men.   It aimed to quantify how much these five healthy lifestyle factors might be able to increase longevity of life in the U.S., where life expectancy is lower than in most other high-income countries. (The U.S. ranked 31st in the world for life expectancy in 2015, with an average of 79.3 years.)”

“For alcohol specifically, those who drank moderately—roughly up to one glass of wine per day for women and two for men—had longer life expectancy than those who drank heavily and those who abstained. However, the study’s researchers emphasize that this is not an excuse to drink alcohol under the guise of extending your life.”

Of course due to man’s sinful heart and mind, every study I read must always conclude with that obvious exculpatory language—so the speaker and their corporate sponsor won’t get sued for urging alcoholism!  As here, Dr. Yanping Li, a research scientist involved in the study, told Wine Spectator magazine, “Nobody should start drinking just because it protects your heart and diabetes risk. However, if you drink, try your best to keep it moderate,”

And another important, but unfortunate, note of this study to consider: less than 2 percent of the people in the studies followed all five habits!!  Okay—so the world goes round, and again, a healthy lifestyle improves life expectancy.

We vino lovers already know the synergy of enjoying wine and food together.  Some of us find it difficult to imagine a nice dinner without wine.  More of a fun endeavor, surely, than a concern of an addictive substance: no one’s jonesing or suffering withdrawal should we have to forego a Chianti with our lasagna alla bolognese.  But the “synergy” of that Italian dish and drink bumps up the enjoyment all the more.

On a more mundane note, we’ll find stodgy health experts telling us that when we drink wine, we should always have it with some food. No problem here!—it’s accepted wisdom worldwide and historically. Everyone’s on board here; we just wrote about some   of our favorite wine bars in town providing great grub and munchies alongside.

The science aspect to it is simple: Having food in your stomach helps slow down the absorption of alcohol into the bloodstream by keeping it in the stomach longer, which in turn keeps you from becoming intoxicated quickly—and gives you a better chance of avoiding a hangover later.

The Academy of Nutrition and Dietetics writes, “On an empty stomach, blood-alcohol levels peak about one hour after consuming a drink, and then decline at a linear rate for the next four hours or so. When consumed with a meal, blood-alcohol concentrations don’t rise as quickly or get as high.”

“Drinking with food in your belly also lightens the load on your liver. When alcohol stays in the stomach, alcohol dehydrogenase (ADH)—an enzyme that exists in both the stomach lining and the liver—can begin metabolizing it. But if there’s no food to keep the alcohol there, it passes more quickly to the intestines, thus leaving the ADH in the liver to do all the heavy lifting, and, the metabolism of other food is put on hold leading to increased fat storage.”

Finally, a slew of studies throughout the last forty years show that drinking wine with food aids in digestion.  Recently, the Journal of Cardiovascular Pharmacology found that subjects who drank red wine while eating a high-fat meals, experienced lower levels of inflammation in their blood vessels than those who drank other beverages.

And we’ve learned, the polyphenols in red wine trigger the release of nitric oxide, a chemical that relaxes the stomach wall, helping to optimize digestion while counteracting the negatives of the digestion process.