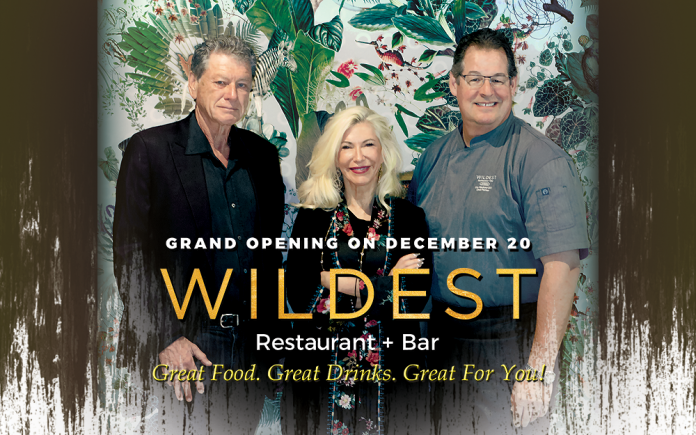 The old adage goes “you are what you eat,” so why not try to be the very best that you can be? This season, there’s a new restaurant on El Paseo that is the first in health-conscious fine dining in the Coachella Valley. Wildest Restaurant + Bar strives to blur the lines between flavorful and nutritious food options, proving that you can have cuisine that is both tasty and good for you. 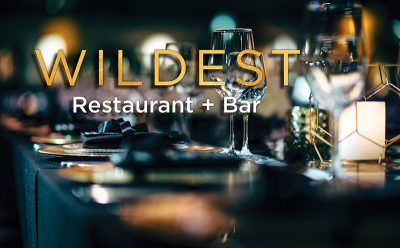 Taking charge in this new culinary venture is desert chef extraordinaire Eric Wadlund and his partners businessman Bill Hay and President of Farley Interlocking Pavers, Charissa Farley. The three professionals have come together to revive what was formerly known as Wildest Greens, and transform it to a new restaurant that exudes a fresh, sexy, and fun atmosphere.

“People want good quality food at decent prices, but we also want to ensure great service. That’s what they’ll be getting at Wildest,” said Wadlund.

Wadlund has an extensive amount of expertise and recognitions under his belt, proving to be the perfect chef to be at the helm of this project. He has been immersed in the culinary arts his entire life, as his father was a baker. He has cooked for the likes of royalty and presidents—both at the White House and locally at Sunnylands.

Wadlund co-authored the cookbook, “Palm Springs Flavor” in 2007 and has worked at various establishments throughout the Coachella Valley, like Rattlesnake at Trump 29 Casino, Azur, his own Beefsteak Restaurant, Spencer’s Restaurant, and Toscana Country Club. He was awarded Best Chef of the valley multiple times.   In addition to his impressive repertoire, Wadlund has also been chosen as one of CV Weekly’s Top 12 Most Interesting and Influential Men in the Valley for 2020.

“Something else that sets Eric apart from other chefs is that often times they can be temperamental, but Eric compliments our personalities very well. All our different temperaments are combined and put into a pressure cooker. The end result is like a reality show, but Eric is the grace under pressure,” added Farley.

Charissa Farley plays just as pivotal a role as Wadlund, with a passion for nutritional science and ethno-botany. As an important local personality and business-savvy individual, Farley brings a new perspective as the trio reincarnates Wildest Restaurant + Bar into the next dining hotspot.

“I own multiple companies, one of them being my own paving company, so we’re used to being at the end of jobs when everything can be chaotic.  That’s why I came into this with all the tools to manage what happens at the end of the construction process,” stated Farley.

“It was a team effort. We all came up with it organically. We all know the restaurant scene in the Coachella Valley, and were ready for the challenge. We did something that would normally take six months in just two months,” explained Wadlund.

Wildest is set to open to the public on December 20.

“We’re all confident, brave, and most importantly, we respect each other. We all know our jobs, but we are also willing to let each other know when something isn’t a good idea. It’s a very open communication,” revealed Wadlund.

The wildest menu is committed to wild caught seafood, grass-fed meats, locally sourced produce, as well as plant-based and gluten free options, including whole roasted cauliflower and a plant-based chicken with roasted potatoes, Brussels sprouts, and cranberries for a seasonal menu with a holiday flare.

An in-house “possible burger” as well as all of the other plant based items, are made in house.  Their goal is to have innovate cuisine you could eat every day.

A vast assortment of exceptional wines will also be available at Wildest, as Bill Hay himself is a connoisseur of French wine. All spirits will be made in-house, including juices, kombucha, and handcrafted cocktails.

Guaranteed freshness is ensured with a seasonal menu that is subject to change based on the best times of availability for certain ingredients. With a health-conscious fine dining experience like Wildest, the goal is to remove the stigma that comes with eating healthy and expecting the dish to taste bland or lack flavor. 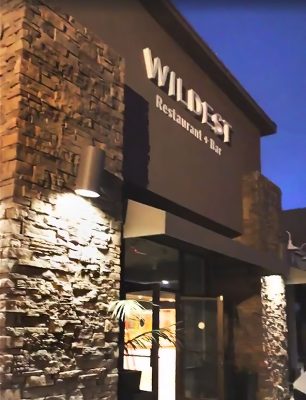 “There’s so much butter and excessive fat that goes into a lot of the food we eat. If we can pay attention and offer a healthier alternative that tastes just as good or even better, we have done our job,” explained Wadlund.

Jeffrey Jones and Steven Love of Egg and Dart, and Terrance Ross Construction were major players in creating the new sleek design of Wildest.

A major motif that will be found in the interior of the restaurant will be the inclusion of wild extinct animals in the design. This is not only a nod to the “Wildest” name of the establishment, but also done in tribute to the former owner, famed philanthropist and film actress Denise DuBarry-Hay who passed away.

“Wildest is very much a labor of love for each other, and for Denise. This is to show that we didn’t just close the restaurant and run. We wanted to keep Denise’s vision alive, and even push it further to new heights,” said Farley.