One of the items on this year’s election ballot where many people have very little information relates to the election of justices. This year we have thirteen justices up for election, three for the California Supreme Court and ten for the Courts of Appeal. When a justice is elected, they serve twelve year terms with the Court.

Goodwin Liu, 44, is first on the ballot. Appointed in 2011, Liu is the son of Taiwanese immigrant parents. Liu was a Professor of Law at UC-Berkeley prior to this appointment. A graduate of Stanford with a Biology Degree in 1991, Liu received Masters Degrees in Philosophy and Psychology at Oxford before earning a law degree from Yale. Some of his legal background includes antitrust matters, white collar crime and product liability.

If elected, Mariano-Florentino Cuellar, 41, will be the only Hispanic on the Court. He was unanimously confirmed for the Supreme Court in August as successor to retiring justice Marvin Baxter. Born in Mexico, Cuellar had been a teacher at Stanford since 2001. Cuellar moved to Calexico in 1987 at the age of 14 when his father secured a teaching job. Cuellar has an undergraduate degree from Harvard, a law degree from Yale and a Ph.D in political science from Stanford. Cuellar is considered an expert in administrative, criminal and international law.

Kathryn Wedegar, 78, has served since 1994. She was first in her class at George Washington University as well as UC-Berkeley where she earned her law degree. Additionally, Wedegar was the first woman to serve as editor-in-chief of the California Law Review.

Terry O’Rourke, 67, was appointed by Governor Wilson in 1998 despite a scathingly negative evaluation by the state bar committee. Many attribute the negative review to O’Rourke’s outspoken criticism of the “cozy” relationship between some attorneys and judges in San Diego. O’Rourke was educated at Claremont (1969) with a J.D. from Harvard.

Alex McDonald, 78, has served since 1995. He graduated from Stanford with an Industrial Engineering Degree in 1958 with an undergraduate in law from UC Berkeley.

James McIntyre, 76, has served since 1996. From the San Diego Court system, he was a trial attorney defending doctors and hospitals in malpractice cases prior to his appointment. His education is from Brown (1960) and Stanford.

Thomas Hollenhorst, 68, has served since 1988. Previously, he was a judge in the Riverside Courts system. Hollenhorst attended San Jose State and UC-San Francisco’s Hastings School of Law.

Rated “exceptionally qualified” by the Commission on Judicial Appointments, Kathleen O’Leary has been the presiding judge of Division 3 since 2012 and served on the Courts of Appeal since 2000. From Orange County, her education is from Loyola and Southwestern University.

Appointed in 2001, Richard Aronson, 64, has served as a Public Defender as well as Deputy District Attorney in San Bernardino. Aronson received his undergraduate and J.D. degrees from UC San Diego.

David Thompon, 58, was appointed in 2012. His background is heavily skewed toward real estate law. Raised in Orange County, Thompson was educated at Georgetown and UCLA.

On this Court since 2002, Richard D. Fybel, 68, received his undergraduate and J.D. degrees from UCLA. Since 2004, Fybel has chaired the Judicial Ethics Committee for the Supreme Court. 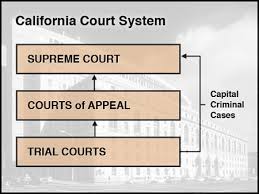