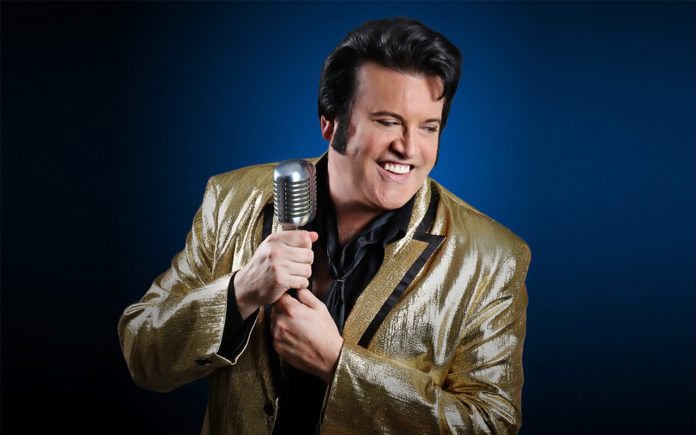 At the recommendation of Laura and Michael Ochoa, curators of the Elvis Honeymoon Hideaway, come join Pastor Kenneth Mills of the First Southern Baptist Church of Palm Springs, 1111 East Vista Chino, as they present “Elvis Is In The Building” featuring Peter Alden on Saturday, December 15, 2018 at 6 p.m. Tickets are $25 and seating is limited. (760) 322-1192. Proceeds benefit the Lottie Moon Christmas Offering 2018 for International Missions.

“As long as I’ve been performing Elvis songs, I have always enjoyed his Gospel Music,” said Alden. “I believe God impressed upon my heart to put a Gospel Show together and for this concert, I will be also singing some of his well known Christmas songs.”

Born and raised in Englewood, New Jersey, Elvis Tribute Artist, Peter Alden Grigsby, grew up in a very musical family. “Both of my parents were Music Teachers. Classical Music was in our home ever since I can remember.” His Mother was an Elementary School Music Teacher and his younger brother, Patrick, who also played piano as a child, is now a Graphic Artist. “My Father was offered a position at the University of Florida and relocated the Family to Gainesville, when I was four years old.”

Grigsby was in the Chorus and Marching Band in High School; later he attended Florida Southern College where he continued singing in the Choir and was involved in Musical Theatre. He studied voice with New York Opera performer Beverly Wolff, who was on the FSU music staff. Classically trained, Alden has a five octave range and perfect pitch.

One of his performances was in “Bye, Bye Birdie” a musical that focused on an Elvis-style singer being drafted into the army. The director put together a small rockabilly band to add some realism to the character’s songs. He and the band stayed together and played at fraternity parties doing a variety of rockabilly and Elvis songs. Maybe not realizing at the time, this started him down the Elvis Tribute Artist path.

“I was part of the National Honorary Fraternity for Music, Phi Mu Alpha.” He graduated with a Minor in Theatre and a Major in Broadcasting Communications and Journalism. “I worked in Radio and Television for a while but didn’t enjoy it as much as performing.” He moved to Orlando, Florida and worked for Walt Disney World and later for Universal Studios. He kept his hand in Community Theatre and started concentrating on an Elvis Tribute Show.

Some of the highlights during this early period included a week long engagement at Libertyland in Memphis during Elvis Week and a sold-out show at the House of Blues in honor of Elvis’s birthday. This led to an audition in Las Vegas for the show “Legends in Concert.” He spent many years with the show performing in various locations including Branson, Myrtle Beach, Pittsburgh and Dallas. The show also had a long term contract on the Premier Cruise Lines Flagship The S.S. Rembrandt.

Alden has performed his tribute show across the country and in many parts of the world including Wales, Beijing, Singapore, Puerto Rico and Vancouver. He is considered by many fans as the “hidden gem” and rank his Tribute To Elvis as one of the best in the world.

While interviewing him and discussing some personal topics, I was intrigued to learn about a rare disease in boy children called ALD, Adrenoleukodystrophy. Females carry this abnormality and pass it on to their children. Each State has their own Recommended Universal Screening Panel (RUSP) that looks for serious developmental, genetic and metabolic disorders that would not otherwise be detected. For these diseases early detection and treatment is essential to preventing irreversible mental or physical disabilities, even death. However, lives can be saved by adding an ALD test to the existing RUSP for newborn babies.

In 2013, New York passed Aidan’s Law and became the first State to add the ALD test to the RUSP. Since the screening was initiated, over 100 children have been given a chance to live a healthy life. Currently, the parents of Aidan who died from ALD, is running a national campaign to have every State add the ALD test to the RUSP. For more information or to donate, visit ALD Connect, the Aidan Jack Seeger Foundation and the ALD database.

The Elvis Honeymoon Hideaway is in Palm Springs and available for private and group tours. Call (760) 322-1192.